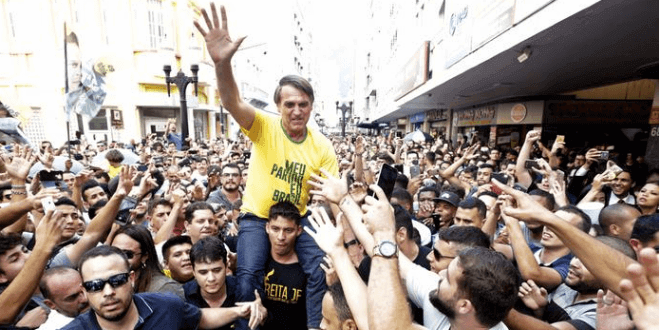 The Lord tests the righteous, but his soul hates the wicked and the one who loves violence. (Psalm 11:5)

Jair Bolsonaro, the front-runner in the upcoming presidential election in Brazil, was stabbed during a campaign rally Thursday and was undergoing surgery.

The far-right politician, whose heated rhetoric has electrified some voters and angered others – -who accuse him of racism and homophobia – in a deeply polarized electorate, was attacked amid a crowd in the south-east state of Minas Gerais. Bolsonaro has performed strongly in recent opinion polls.

Those same polls suggested that he will likely receive the most votes in next month’s presidential elections, especially if the country’s former president Luis Inacio Lula da Silva (‘Lula’) remains blocked from standing. He is currently in prison, but is appealing against his candidacy ban – imposed after his conviction for corruption.

Police identified the attacker as 42-year-old Adelio Bispo de Oliveira, who was arrested at the scene. Oliveira was apparently badly beaten by Bolsonaro supporters following the attack. Initial reports suggested that Oliveira suffers from mental delusions, with Luis Budens, president of the National Federation of Federal Police telling AP that the attacker appeared to be “deranged.”

“Our agents there said the attacker was ‘on a mission from God,’” Boudens said. “Their impression is that they were not dealing with a mentally stable person. He didn’t expect to be arrested so quickly, agents reacted in seconds.”

Bolsonaro’s son, Flavio Bolsonaro, took to Twitter soon after the attack to suggest that his father’s wounds were superficial. However, an hour later he posted another tweet saying the wound was “worse than we thought.”

Flavio said the puncture had hit parts of his father’s liver, lung and intestines and he lost a lot of blood.