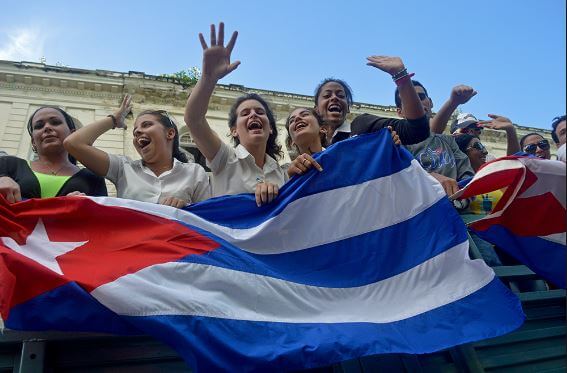 President Donald Trump, in a Feb. 18 speech in Miami, said that “The days of socialism and communism are numbered, not only in Venezuela, but in Nicaragua and Cuba as well.”

“And right on cue, the dominos started tottering,” Monica Showalter wrote for American Thinker on Feb. 24.

Cuban blogger Alberto de la Cruz reported on Feb. 24 that hundreds of Cubans were taking to the streets of Havana to protest the Castro regime.

The rare show of dissent “comes on the eve of the Castro regime’s sham referendum vote to ratify a new communist constitution,” Showalter noted. “It sounds like the Cubans are taking courage from Venezuelans.”

The Venezuelans, Showalter wrote, “have arranged it so that they are winning – they are calling all the shots on how they take the democracy back, they have a built-in government waiting for the transition, and they are rallying the international community of nations behind them.”

Showalter continued: “They also are mobilizing civil society for the great mission of distributing aid to the hungry and destitute ravaged by socialism, which is a great thing for the country’s trashed social capital, and focusing on rebuilding the country. That frankly looks like a winning plan, and people recognize winners – and they follow.”

What is happening “has the look of a chain reaction, and for that reason, Marxist Nicaragua and Bolivia need to be watched closely, too,” Showalter noted.