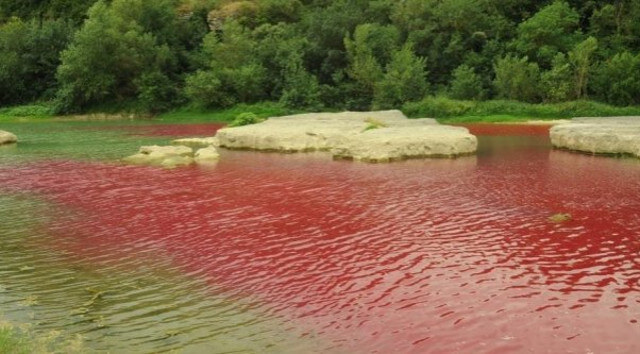 Last month, WND reported the stunning phenomenon of hailstorms in the Saudi desert.
Those who watch for signs of the end times also noted lightning and hail in the remote Australian landscape, and hail that killed at least one person and livestock in Swaziland.

Bodies of water have been turning red around the globe.

It is Adam Eliyahu Berkowitz at Breaking Israel News who has kept up the reporting on the strange events.

Noting it was like a “plague” that struck biblical Egypt, he reported rivers in Malawi and Indonesia suddenly turned color.

“The Linthipe River in Dedza, Africa, turned blood red last Wednesday, shocking residents living along the river. The river is the center of life in the village and the women were the first to notice the phenomenon when they came to do laundry in the afternoon,” he reported.

A report from Malawi 24 quoted one woman saying: “As usual, we came to this place to wash our clothes besides drawing water for home use. But to our surprise we saw that blood like stuff was flowing in the river. This scared us and we called some people to witness the bizarre circumstances.

Group Village Head Nthandizi said, “A lot of conflicting information has emerged, with some saying it could be red oxide while others say it is blood and others say this has to do with science.”

Then the same thing happened in Jayapura, on Indonesia’s island of New Guinea.

Explained Berkowitz, “Rabbi Pinchas Winston, who writes extensively about the end-of-days, teaches that everything that happened during the Exodus from Egypt will reoccur in some form in the generation just before the Messiah is revealed.”

Winston told BIN: “Many know that a comparison is made between the redemption from Egypt and the final one for which we now wait. However, few know just how comparable they are.”

In the book of Exodus, the Nile River was turned to blood after the pharaoh denied the Israelites permission to leave.

At the time, Berkowitz wrote, “Skeptics of the biblical account of the Ten Plagues will be chagrined to see shocking videos of a recent wave of hailstorms that struck simultaneously around the world in the most unlikely of places.”

He noted the devastating effect of the hailstorm in southern Africa on cattle and the “unlikely meeting of the elemental opposites of fire and ice” witnessed by Australian farmers.

The Saudi storm in the northern province of al-Jawf left behind flood and hail damage. In Swaziland, hail killed one person and at least 18 cattle. The fire and ice was reported in Australia’s Central Wheatbelt district.

“Fire and ice raining down on beast and man, mirroring the Biblical account of the Exodus. Prophecy predicts that the plagues of Egypt will reappear before the arrival of the Messiah. Could it be that is what we are witnessing?” Berkowitz asked.