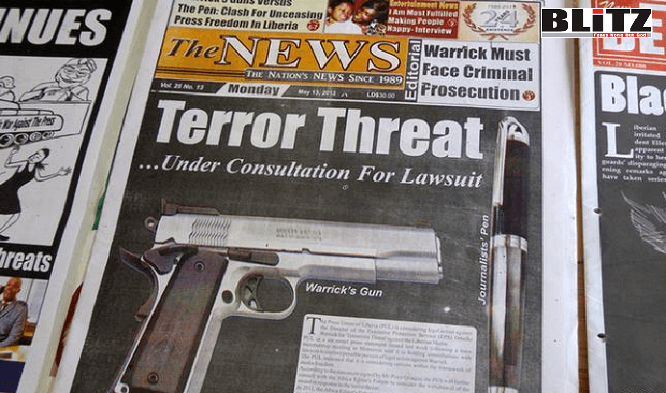 A dozen cases of bullying and death threats against journalists have been recorded in Liberia since October. Reporters Without Borders (RSF) calls on the authorities to actively investigate these infringements of freedom of the press.

The most recent case concerned an attack in early December on the journalist Obediah Johnson, who works for the country’s leading investigative newspaper Front Page Africa. He was investigating the bussing of voters from the Monrovia district of Brewerville to another area organized by candidates in the mid-term Senate elections on 8 December when he was chased by a group from among the thousands about to board the buses.

The group had noticed that they were being filmed live on Facebook and tried to attack the journalist, forcing him to stop filming.

In the past two months, at least nine journalists have received death threats. Among them was radio talk show host T-Max Jlateh, whom associates of the government had in their sights. He hosts the popular talk show 50-50 on the radio station Sky FM, which he heads. The programme, which highlights the ills of Liberian society, is disliked by the ruling party.

Such threats and dangers have been taken seriously by some of those targeted. The Parrot news agency reported on 21 October that its associate editor, Julius Jaesan, had fled Liberia for an unidentified destination in fear for his life. The agency said it had taken the decision because his life was in great danger “with glaring evidence” that a gang of killers had been hired to go after him. The threat followed the publication of an article about the death of an audit agency official who was investigating a public company.

RSF has recorded three physical assaults and six cases of intimidation and death threats against journalists since the beginning of October.

“Assaults, intimidation and death threats: such violations of press freedom have been growing to general indifference since George Weah took office in 2018,” said Assane Diagne, the director of RSF’s West Africa office.  “The decriminalisation of press offences is a major step forward, but it is not acceptable that journalists should continue to be verbally or physically abused in this way.  “We urge the Liberian authorities to ensure their safety and carry out proper investigations in order to find and punish those responsible.”

Liberia has fallen two places to 95th out of 180 countries in the 2020 World Press Freedom Index compiled by RSF.