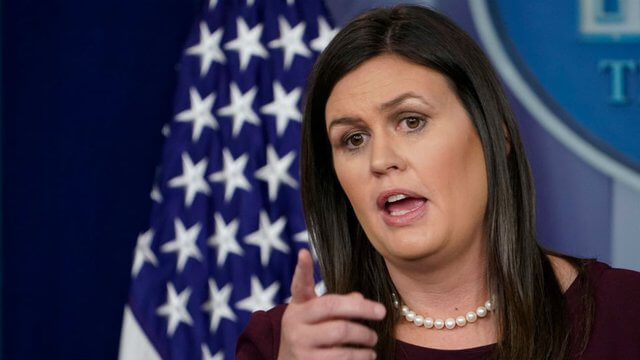 “Now clear why top Democrat on Senate Judiciary Committee did nothing with allegation for months or even ask Judge Kavanaugh about it,” Sanders tweeted. “Senator Feinstein just said ‘I can’t say everything’s truthful.’ ”

Feinstein told reporters on Capitol Hill earlier Tuesday that she couldn’t say that everything in Christine Blasey Ford’s allegations against Kavanaugh was “truthful.”

Feinstein later clarified her comments to CNN, saying, “Based on what I know at this stage, she [Ford] is credible.”

Feinstein also tweeted that she considered Ford to be “sincere” and “believable.”

Ford says Kavanaugh pinned her to a bed, groped her and attempted to remove her clothes at a party in the early 1980s.

Kavanaugh has denied the allegations.

Feinstein was the first to bring Ford’s accusations to the national stage when she announced one week before Kavanaugh’s scheduled confirmation hearing that she was bringing an accusation against him to the FBI.

Feinstein has said that she has had Ford’s accusations since July, a point with which Republicans have taken great issue.

Senate Majority Leader Mitch McConnell (R-Ky.) ripped into Democrats on Monday for not bringing the issue forward until “the eleventh hour.”

Republicans have scheduled a hearing for Ford’s allegations next Monday and have delayed the vote on Kavanaugh’s confirmation, which they were expected to win.

It is unclear what will come of Monday’s hearing, given that Ford’s lawyer has said she will not testify until an FBI investigation has been completed.