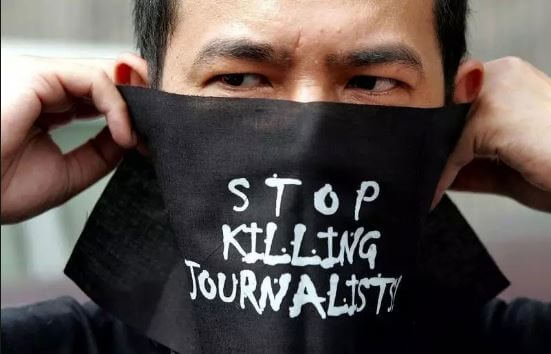 Mexican authorities must immediately take all necessary actions to guarantee the safety of journalists in Ciudad Victoria, the capital of Tamaulipas state, after a severed human head was left outside the offices of a local newspaper, the Committee to Protect Journalists said today.

An ice box containing the head and hands of an unidentified male were left outside the offices of Expreso on December 20, together with a threatening message directed at local journalists, according to news reports.

A spokesperson for Expreso, who asked to remain anonymous out of concern for his safety, told CPJ that the ice box and message were left in the parking lot in front of the office at approximately 3.30 p.m. He said that he was unaware of the identity of the victim and that all staff were accounted for.

According to photos shared on social media, the accompanying message was not directed at a specific news outlet or reporter. “To the newspapers allied with the government of Cabeza de Vaca by multimillion contracts, they will not save you and this is proof. Continue to be quiet so you can watch. The beef is not with you. Understand,” the message, which lacked punctuation and was not signed, said. Francisco Javier García Cabeza de Vaca is the current governor of Tamaulipas.

“The depraved act of leaving human remains as a threat outside the offices of Expreso shows the extent of the violence and climate of fear that journalists in Tamaulipas work under,” said CPJ Mexico Representative Jan-Albert Hootsen. “We call on state and federal authorities to investigate and hold to account those behind the threat and to ensure the safety of journalists in Ciudad Victoria.”

Irving Barrios Mojíca, the Tamaulipas state attorney general, told CPJ via text message on December 20 that his office had opened an investigation but that he could not provide further details. An article published on the website of Expresothat same day said that forensic investigators were working to establish the identity of the victim.

A spokesperson for the Federal Mechanism for the Protection of Human Rights Defenders and Journalists, which is operated by the federal Interior Secretariat, told CPJ that the institution was in the process of enrolling Expreso and its personnel in protective measures. Expreso was not previously enrolled in a federal or state protection program, according to the newspaper and the mechanism.

The spokesperson for Expreso told CPJ that the newspaper and its staff had not recently received threats and that the last violent attack was in 2012, when unknown individuals attacked the office with explosives. The newspaper regularly reports on local and state politics, including recent articles on governor Cabeza de Vaca.

Tamaulipas is plagued by deadly violence caused by turf wars between criminal gangs; federal authorities said that 559 people were killed in the state in the first seven months of 2018, more than 40 percent more than during the same period last year. Ciudad Victoria is the most violent city, accounting for more than half of all homicides in the state, according to state authorities quoted in news reports.

Journalists in Ciudad Victoria told CPJ in recent months that they routinely receive threats, often from members or organized crime, and that the press self censors to try to lessen the risk of attack. On May 29, the body of reporter Héctor González Antonio, then employed at Imágen but previously a reporter for Expreso, was found in the city. A September 3 statement from local authorities said that a suspect had been arrested.

Mexico is the deadliest country in the Western Hemisphere for journalists. CPJ has determined that at least four journalists were murdered in direct reprisal for their work there this year, and are investigating the murders of another six to determine the motive.