Shahin Naseri, 47, was detained on September 17, 2019, and was taken to the Shiraz Intelligence Detention Center in southwestern Iran where he was tortured. Writes Adena Nima

In September 2018, a little know Iranian non-political prisoner saw something that would later cost him his life.

Shahin Naseri, 47, was detained on September 17, 2019, and was taken to the Shiraz Intelligence Detention Center in southwestern Iran where he was tortured.

As a torture victim, the middle-aged man who had an MBA and was happily married thought it was “his human duty” to report the brutal torture of Navid Afkari, a young protester who shared a cell with him at the Intelligence Detention Center.

“One day in the Shiraz Intelligence Detention Center, when I was being taken to the torture area, I heard crying and pleading and profanities in the hallway. When I moved closer, I saw two plainclothes agents using vulgar language and profanities while violently beating Navid in one of the rooms. They were brutally hitting Navid on his head and body with an iron bar and batons. I clearly heard them say ‘whatever we say is the truth’ and ‘you will write down what we say or not’. And Navid begged them to stop and said he had done nothing wrong,” he later said in an audio file from prison.

On October 31, 2019, Shahin wrote an official testimony detailing the tortures he saw carried out against Navid Afkari. He also testified in court.

“The branch interrogator said, ‘what did you see at the detention center that you wanted to testify to?’ I started describing everything I saw and the torture of Navid Afkari. He cut me off and told me with a very bad and insulting tone while using profanities that ‘You’re interfering in a security case. I’ll make you miserable. I’ll force this agent to file a complaint against you for slander and defamation, and I’ll make you regret it.’”

However, despite the very real threats, Shahin refused to stay silent. He knew now that appealing to Iran’s Judiciary, which had been using torture as a tool for the past 42 years, was a waste of time. So, he sent an audio file from prison detailing the torture and pleading with Iranians to be Navid’s voice and to prevent his execution.

“Honorable people of Iran. I want you to help each other to be Navid’s voice. So that his innocence is known by all. So that Navid does not become the victim of our silence and the oppression of the judges. Never forget that everyone will have a turn in this wheel of tyranny and injustice. Today was Navid’s turn, and tomorrow will be my turn or yours.”

By this time, international sports figures and politicians were also calling for the release of Navid Afkari, who had moved the world with his courageous messages from prison.

But the regime shocked the world on September 12, 2019, and executed Navid.

Sometime before his execution, Shahin was taken to an unknown location and human rights groups expressed concern for his safety. Reports said he had not contacted his family for 10 days and that he was handed over to the Shiraz Intelligence Detention Center, the very organization he had testified against. No one knows what happened during that time but knowing the Iranian regime, one can assume that verbal threats directed at the brave man were the least of it.

He later said an official in Shiraz had threatened that he would hurt his wife.

All Iranians know that these kinds of threats must be taken seriously.

But Shahin still refused to stay silent. He was later transferred to the Greater Tehran Prison, aka Fashafuyeh Prison, a notorious prison located 30km south of Tehran known for its horrid, unhygienic, and overcrowded conditions.

On the first anniversary of the execution of Navid Afkari, Shahin wanted to once again, defend the young man’s innocence and shed light on the injustices carried out against him. But prison officials found out and threw him in solitary confinement. On Tuesday, September 21, his family received word from his cellmate that Shahin had suspiciously passed away. Babak Paknia, a lawyer affiliated with his case, said Shahin had called him three times the night before, fearing for his life.

Fearing that the regime would blame his death on suicide, a family member who had talked to Shahin Naseri days before his death told a human rights group that he was “not depressed and suicidal”. His family collected his body on Wednesday and buried him in his home province of Hamedan in northwestern Iran amid heavy security measures.

Following his death, hundreds of Iranians took to social media platforms to spread his message of bravery and sacrifice. Some even changed their profile pictures to newly published pictures of Shahin.

Shahin was an ordinary man who was in prison, not for being active against the regime or taking part in protests but for what the regime called “fraud”, a charge he had denied in one of his audio messages from prison. But in September 2018, he made a decision that would alter his life. A decision that he made again and again despite the threats and torture. Not for his own wellbeing or in his own defense but for justice for a young protester he met in prison.

Navid shook the lives of many people. And Shahin was one of them. As they say, courage is contagious and just as Navid became a national hero who refused to stand down, Shahin too became a hero and will never be forgotten.

In his audio message, while pleading for Iranians to stand with Navid, Shahin said:

“I leave you with your conscience and a poem by the great Saadi, who is the pride of Iranians.

‘Human beings are members of a whole, in creation of one essence and soul.

If one member is afflicted with pain, other members uneasy will remain.

If you have no sympathy for human pain, the name of human you cannot retain.’”

And in his last audio message before his death, he said:

“The dictator and brutal clerical regime thought that by shedding the blood of martyr Navid Afkari, Navid would be forgotten. When they thought we were sad and weeping, they did not know we were happy in our hearts, and that our Navid would take root and millions of Navids would sprout from the ground to wipe out the foundations of the reactionary, dictator regime.” 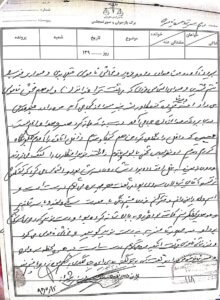