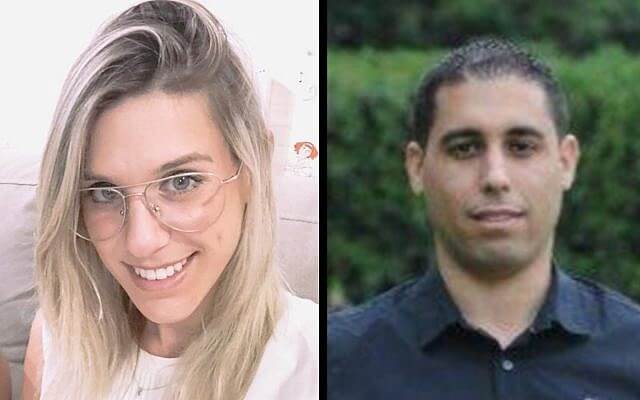 Authorities on Sunday afternoon identified a man and a woman shot dead in a terror attack in the West Bank earlier in the day as Kim Levengrond Yehezkel, 29, a married mother of a baby, and Ziv Hajbi, a 35-year-old father of three.

Yehezkel was from the central Israeli town of Rosh Ha’ayin, while Hajbi hailed from Rishon Lezion. They were shot dead by a Palestinian gunman at the Barkan Industrial Park near the settlement-city of Ariel.

The suspect, a 23-year-old Palestinian man from the northern West Bank, entered a factory where he was employed in the Barkan Industrial Park shortly before 8 a.m, armed with a locally produced Carlo-style submachine gun, according to army spokesperson Lt. Col. Jonathan Conricus.

Inside, he tied up and shot dead Yehezkel and Hajbi at close range, as well as wounding the third victim, according to eyewitnesses.

After the attack the suspect fled the scene, still armed with the submachine gun, the military said.

A worker at the factory who was nearby told reporters that the terrorist also tried to shoot at him as he fled the scene. The worker, who carried a gun, fired back a shot at the gunman, but apparently missed. He said he recognized the suspect as an electrician who worked at the company.

He had been absent from work in the days before the shooting, but was still employed by the factory, Conricus said, refuting earlier media reports that he had been fired.

The IDF would not release the suspect’s name, but said he was from the northern West Bank village of Shuweika, near Tulkarem. According to the IDF, the suspect had no history of terrorist activities and was not tied to any terror groups, though several of them applauded his actions.

The businesses in the Barkan Industrial Park, located near Ariel, employ some 8,000 people, approximately half of them Israelis and the other half Palestinians.

Israeli Prime Minister Benjamin Netanyahu said Sunday that the “despicable murderer” who carried out a terror attack at a West Bank industrial park earlier in the day, killing two Israelis and injuring another, will be brought to justice.

“This is a very serious terror attack in which two Israelis were brutally murdered,” he said at the opening of the cabinet meeting. “Security forces are in pursuit of the despicable murderer, and I am sure that they will catch him and bring him to justice.”

Defense Minister Avigdor Liberman also commented on the extensive manhunt for the assailant, saying, “It’s only a matter of time before we lay our hands on him.”

The businesses in the Barkan Industrial Park, where the attack took place, employ some 8,000 people, approximately half of them Israeli and the other half Palestinian.

Shortly before 8 a.m., the suspect, a 23-year-old Palestinian man from the northern West Bank, entered a factory where he was employed in the park, near the Ariel settlement-city, armed with a locally produced Carlo-style submachine gun, according to army spokesperson Lt. Col. Jonathan Conricus.

Inside, he tied up and shot dead a man and a woman and shot a third female victim, 54, in the stomach. The second woman was moderately wounded and taken to a nearby hospital for treatment.

President Reuven Rivlin lamented the loss of life as well as the wider cost of an attack at a place where Israelis and Palestinians work side by side.

“I am shocked and saddened by this morning’s terrible terrorist attack at the Barkan industrial area. Our hearts are with the families of those who were killed, and our prayers are with those who are injured.

“This was not only an attack on innocent people going about their daily lives, it was also an attack on the possibility of Israelis and Palestinians coexisting peacefully,” he said.

Education Minister Naftali Bennett declared that there must be “zero tolerance” for any form of terrorism.