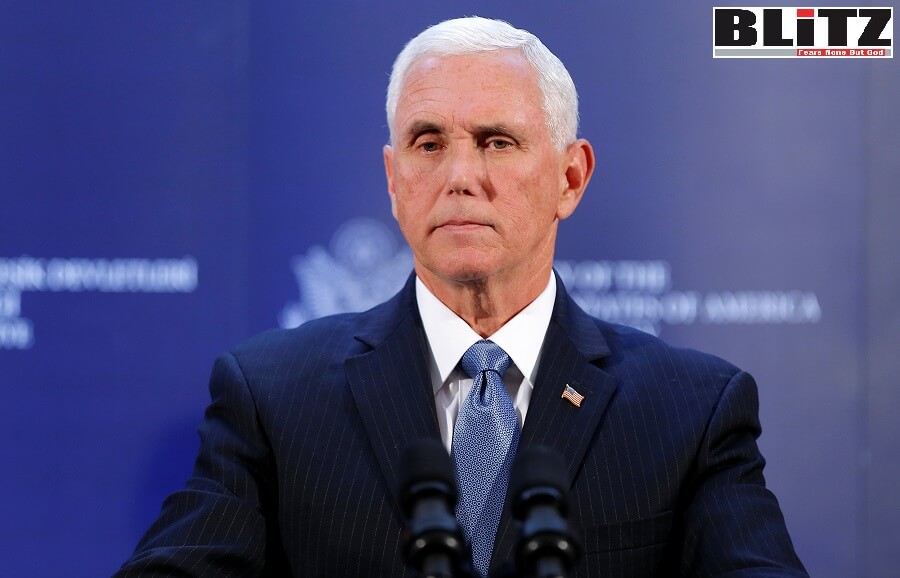 Citing the principles that “weakness rouses evil” and “peace comes through strength,” Pence focused many of his remarks on “signals of weakness from this administration … [that] embolden our enemies,” of which he highlighted three: the botched withdrawal from Afghanistan, not standing by Israel, and appeasement of Iran.

According to Pence, the “disastrous withdrawal from Afghanistan” carried out by the Biden administration was “a foreign policy humiliation unlike anything our nation has endured since the Iran hostage crisis.” This disaster “never had to happen.”

The Trump-Pence administration, he explained, reached an agreement with the Taliban in February 2020 that predicated an American withdrawal on three conditions – that the Taliban (1) bring no harm to American service members in Afghanistan, (2) work with the Afghan government; and (3) commit to preventing Afghanistan from once again being a “safe harbor” for Islamic terror organizations.

Pence feels strongly that this agreement would have held had Trump remained in office, as it came on the heels of the U.S.-led defeat of the ISIS caliphate in Iraq and Syria, and of the killings of ISIS leader Abu Bakr Baghdadi and Iranian Gen. Qasem Soleimani. The Taliban had good reason to fear that violating Trump’s conditions-based Afghanistan withdrawal terms would be met with the severest of consequences.

In contrast, the Taliban made it clear early on that it had little to fear from the Biden administration (and no intention of honoring condition 2, in particular). The Biden administration’s withdrew anyway, leading to the collapse of the legitimate Afghan government, the stranding of U.S. citizens and allies behind enemy lines, and the deaths of 13 U.S. service members.

Pence assessed that the long-term negative impact of the withdrawal on America’s reputation and the potential for increased threats from Afghanistan are both “significant.” But “things would have been different” under Trump because he understood that “peace comes through strength.”

The Biden administration’s eagerness to “reopen negotiations over the Iran nuclear deal” is a further indicator of the weak “philosophy” Biden has “embraced throughout his public career.”

Pence reiterated that pressure on Iran is the way forward in dealing with its regime’s nuclear ambitions and regional aggression. “The pathway forward should be isolation economically, diplomatically, bringing pressure to bear as we were till the last day of our administration – and not appeasement, not capitulation.” Appeasement, he said, “is the pathway toward Iran ultimately returning to its malign activities and ultimately being in a position where [it] can obtain the kinds of weapons that threaten Israel and ultimately threaten the region and the world.”

Pence described Biden’s “silence for so long while rockets rained down from Gaza on Israel” in May 2021 and restoration of economic aid to the Palestinian Authority as evidence of failed thinking about the conflict. In particular, he said, the administration embraces the “notion that America’s job in the Middle East … to be ‘an honest broker’,” which “comes from a long history of liberal Democrat policies that … failed in one administration after another.”

In contrast, the Trump administration took an “unapologetic stand … of American support for Israel.” In keeping with Trump’s belief that peace is “more possible if you take what’s not negotiable off the table,” the administration recognized Jerusalem as Israel’s capital and accepted the validity of Israel’s annexation of the Golan Heights. Along with his administration’s withdrawal from the “deeply flawed” 2015 Iran nuclear deal and efforts to isolate Iran economically and diplomatically, this boldness helped cultivate new alliances with leaders of Arab nations that culminated in the Abraham Accords, “one of the most unheralded diplomatic breakthroughs in the last 25 years.” The Biden administration should be building upon the success of the Abraham Accords to “extend a hand to those who would work [with Israel] in good faith, whether it be to Arab states or even the Palestinian Authority.”

Instead, the Biden administration is “going back to the very policies [in place] when we came into office in 2017,” said Pence. “I think those of us that cherish Israel, those of us that long for peace in the region and an end to the threat of terrorist violence … should be very concerned now by the direction of this administration.”

Another area where the Biden administration’s “failed leadership” has compromised American national interests is border security. The escalating crisis of thousands of illegals flooding across the U.S. border and overwhelming immigration authorities is a “direct result of decisions taken by President Biden,” in particular rescinding the Trump administration’s “Remain in Mexico” policy, which obliged asylum applicants at the southern border to stay in Mexico while their claims are processed. “The cartels immediately went about [doing] what they do and that is essentially gathering people up in the Northern triangle countries in central America and from elsewhere, and having them pay money to bring them up on a long endangered charter to the border to apply for asylum and disappear into the country.”

Pence concluded his remarks by emphasizing the importance of “calling out radical Islamic terrorism” as the forthcoming 20th anniversary of 9/11 approached. He expressed concern that details of the 9/11 attacks and those who perpetrated them are not being taught in many American schools. “[T]he only thing that protects us from … another major terrorist event on our soil is going to be vigilance and an understanding of this generation and the next about the real threat of radical Islamic terrorism.”