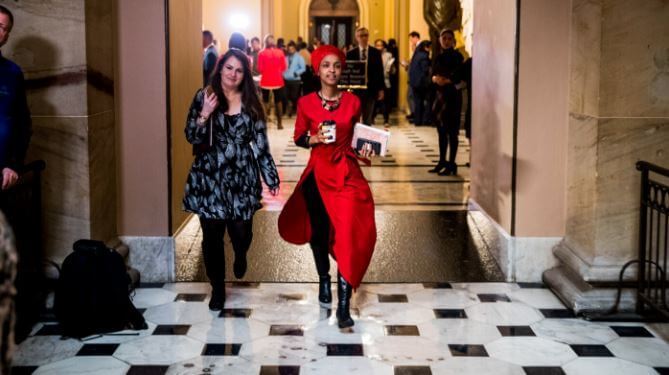 At a news conference at the Dar al-Hijrah mosque in northern Virginia, Osama Abuirshaid, who previously worked for a Hamas-support network in America and leadsone of the country’s most prominent organizations pushing for an economic, social, academic and political boycott of Israel, called it “an orchestrated controversy.” Nihad Awad, who also was part of a Hamas-support network in the United States and has been the Council on American-Islamic Relations (CAIR)’s only executive director, echoed Omar when he repeated a demonstrably false trope that “the debate [about Israel] that has been prohibited. The influence of the pro-Israel forces on our government officials’ decisions, vis-à-vis aid to the State of Israel.”

It’s part of broader effort to dismiss any criticism of Omar’s statements as its own form of bigotry. Omar, D-Minn., first drew attention regarding anti-Semitism during last summer’s congressional primary campaign. A 2012 Twitter post she wrote during a conflict between Israel and Hamas in Gaza said that Israel had “hypnotized the world,” and she prayed that “Allah awaken the people and help them see the evil doings of Israel.”

She apologized in January for trying to rationalize her invocation centuries-old smears alleging Jews’ ability to control the world, saying “It’s now apparent to me that I spent lots of energy putting my 2012 tweet in context and little energy is disavowing the anti-semitic trope I unknowingly used, which is unfortunate and offensive.”

Just two weeks later, after she again took to Twitter to invoke an anti-Semitic stereotype – this time about Jewish money and power.

“It’s all about the Benjamins baby,” she wrote to explain why she and fellow Democrat and Israel-basher Rashida Tlaib draw attention for their “criticisms of Israel.” Asked who she was referring to, Omar wrote, “AIPAC!”, referring to the American Israel Public Affairs Committee.

Under pressure from House Democrats, Omar again apologized, again saying she was “listening and learning” and never meant “to offend my constituents or Jewish Americans as a whole.” She stayed silent, however, as Islamist supporters used the controversy to raise money for Omar’s re-election.

Omar then struck again, claiming that, as a member of Congress, she is pressured “to have allegiance/pledge support to a foreign country,” which invoked another centuries-old smear of Jews – that their faith or support for Israel constitutes a dual loyalty. It is a common refrain among Israel bashers.

Despite this troubling pattern of behavior, a House resolution pushed by Speaker Nancy Pelosi never mentioned Omar and was weakened dramatically when it was broadened to condemn many forms of bigotry, not just anti-Semitism.

That didn’t stop people from claiming Omar was treated unfairly.