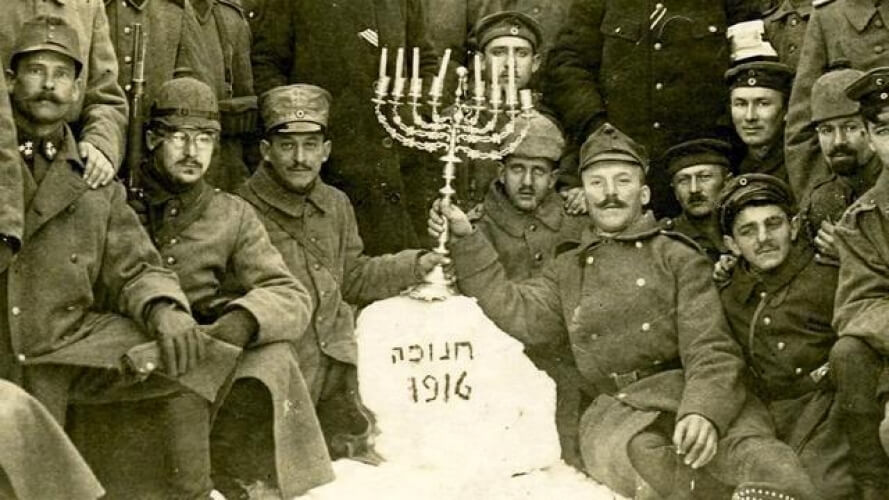 On November 11, at 11:00 a.m., 1918, the guns which had pounded the Earth into oblivion in search of human targets for four seemingly interminable horrendous years, were finally laid down. Humanity could breathe again.

The German surrender signified the end of the most destructive war up to this point in history. Forty-two million troops fought for the Entente, whose original forces included France, Russia and Great Britain, and 23,000,000 for the Central Powers, which primarily comprised Germany, Austria-Hungary and the Ottoman Empire.

Over nine million troops died on the battlefield. Many more were wounded and scarred for life. Millions of civilians also perished.

The Jews were caught in the middle.

Of the over one and a half million Jews who served, one hundred and seventy thousand fell in the war.

Jews also suffered as refugees. Well over one million faced expulsions in Eastern Europe. Many Jews were forced to endure devastating pogroms. With the armistice, despite all hopes, the suffering was far from over. Two and a half years earlier, the editor of the journal, The Jewish Advocate, Jacob DeHaas correctly observed, “The rising tide of chauvinism is everywhere promoting a fresh anti-Semitism. The reward of the Jews for bravery and patriotism will, within Europe, be hatred. This is not prophesy. The facts lie too near fulfillment for any such claim.”

Indeed, the sacrifices and loyalty displayed by Jewry to their respective nations was to little avail in the pursuit of equality.

As defeated empires like Austria-Hungary fell and nations rose in their stead, anti-Semitism increased during subsequent post-war revolutions. Pogroms broke out in Poland in the city of Lvov. They also broke out in Lithuania starting in Vilna at the hands of Polish troops, in Hungary during the “White Terror” as well as in other lands. The anti-Jewish violence in the Ukraine during the 1919 Russian Civil War was perhaps the worst catastrophe that befell the Jews since Roman times, where massacres at the hands of Cossacks was on a massive scale causing perhaps as many as one hundred thousand Jewish deaths.

By 1916, as the war headed into a stalemate and the casualties and destruction mounted, there were already tangible signs of German enmity towards its Jews. A census was conducted with the consent of the government intended to impugn the war record of German Jewry’s participation in the war. It was known as the ‘Jew Count.’ German Jewry was aghast that such accusations could be leveled.

By the time of the armistice, Jews were to a large extent on the receiving end of blame for Germany’s surrender. It was called the ‘Stab in the Back’ and the accusation arose that the Jews covertly worked behind the scenes to cause Germany’s defeat. The accusations abounded.

By October 21, 1935, as per decree issued by the ruling Nazi regime, the names of Jewish soldiers from memorials who fell during the ‘Great War’ were removed.  Their service and ultimate sacrifice were expunged from the record.

Amid the dangers and horrors, there was one beacon of light. After the Armistice, Palestine was placed under the control of the British who along with ANZAK troops had ousted the Turks who had controlled the land for four hundred years. At the time, the restoration of Zion to the Jews was a promise made by Great Britain and supported by Western nations in the Balfour Declaration and at the subsequent San Remo Conference of 1920. Hundreds of thousands of Jews over the following decades up to World War II would find refuge despite intermittent immigration restrictions imposed by the British until the MacDonald White Paper of 1939 which severely curtailed immigration.

One century later, the world in many respects has not changed. Wars are still fought, hostile nations still threaten. For the Jew, despite emancipation, assimilation and alleged climates of tolerance, anti-Semitism remains an ever present danger.

The events of Armistice Day and the post war did not create Israel but did guarantee its inevitability and eventuality. Today the State of Israel stands ready to receive any Jew who makes his way to its shores.

Larry Domnitch is an author and educator who resides in Efrat, Gush Etzion.