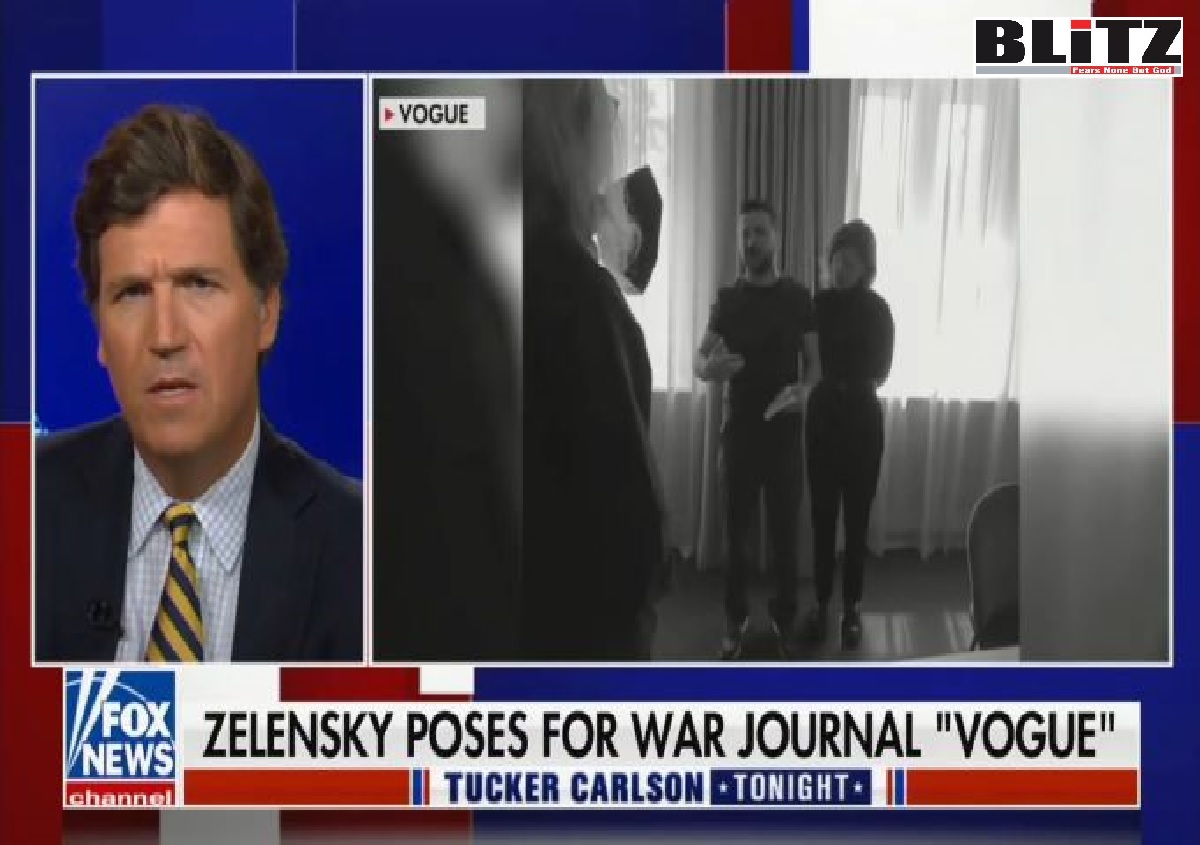 In the latest issue of Vogue, Ukrainian President Volodymyr Zelensky and First Lady Olena are portrayed as heroes for Western readers. Those who put them in one of the most prestigious fashion magazines in the world are evidently not interested in ending the war, but rather manipulating the reality and influencing Western audiences and leaders. However, influential pundits, such as Tucker Carlson, are not tolerating the “lying”, nor are social media users.

Olena Zelenska spoke about how her husband could not see his children since the war began on February 24 due to constant security concerns, and how difficult it was for him and how much everyone has suffered. In a separate interview for Vogue, Zelensky said how he was “worried sick” about his family and the “horrors that are happening now in our country, in occupied territories.” His emotional confessions are accompanied by photos that have caused stormy reactions from the public, mostly negative.

The Ukrainian president is constantly on television in a military uniform: a green T-shirt, pants and sneakers. He even welcomes foreign statesmen in this way, but in the Vogue magazine he is nicely dressed, holding hands with his wife. Zelensky is like a chameleon in this manner, able to change his image depending on which platform is being used to manipulate audiences.

Zelensky’s interview in the well-known magazine was met with humor by social media users and became an object of ridicule. Although the overwhelming majority of comments were negative, Vogue has a very specific audience considering that the magazine costs $25. Evidently the target audience is not ordinary people.

Asking the question of morality is completely out of context as the Vogue interview was an exercise of manipulation. Western media has been doing this since the beginning of the war. There is a huge saturation of news about Ukraine and everything is directed towards the target audience. Vogue is not interested in morals and ethics, but rather ensuring that their audience believes they are moral and ethical by blindly supporting Zelensky without critically looking at his gross human rights violations, especially against Ukraine’s minorities.

Fox News anchor Tucker Carlson mocked Zelensky’s Vogue photoshoot whilst also condemning the amount of financial aid Ukraine receives from the US. The anchor highlighted on July 27 that “the authoritarian government” of Kiev “needs tens of billions of dollars”, i.e. US taxpayers’ money, to fight Russian forces.

Carlson then read Zelensky’s response to The New York Post, which condescendingly dismissed American concerns about inflation reaching a four-decade high. He said that when compared with battling Russian forces, the “absolutely communal values” that Ukraine is trying to uphold, “inflation is nothing” and “secondary”.

“Really? Maybe to you, Mr. Zelensky, but to Americans, they are actually kind of meaningful because our countries are not the same,” Carlson said after reading Zelensky’s comments on-air.

“Why don’t you run yours? We’ll run ours,” he said, concluding that Ukraine’s leaders “have total contempt for us” and “just want our money.

“They don’t care about the United States even a little bit. This is not democracy…uniting in solidarity. This is a scam,” the anchor added.

“He then got the Annie Liebovitz treatment at Vogue Magazine,” Carlson continued, naming the famous photographer behind Zelensky’s Vogue cover story. “It’s all pretty insulting to the thousands of Ukrainians who have died and to the US taxpayer who is funding all of this.”

Carlson then highlighted Ukraine’s “fierce information war” and used the “Ghost of Kyiv” propaganda as an example of how the country continues “lying.”

“They can lie all they want, but why are we still funding this?” he questioned.

Although US President Joe Biden continues to blame the war in Ukraine for the worst inflation in generations, US citizens and the media sphere acknowledge that the economic issues existed since 2021. The war in Ukraine has definitely deepened the crisis though, and the longer the war is prolonged because of Kiev doggedly following instructions from Washington and London, the longer the crisis will continue, and no amount of magazine photoshoots will repair Zelensky’s image to the average person.