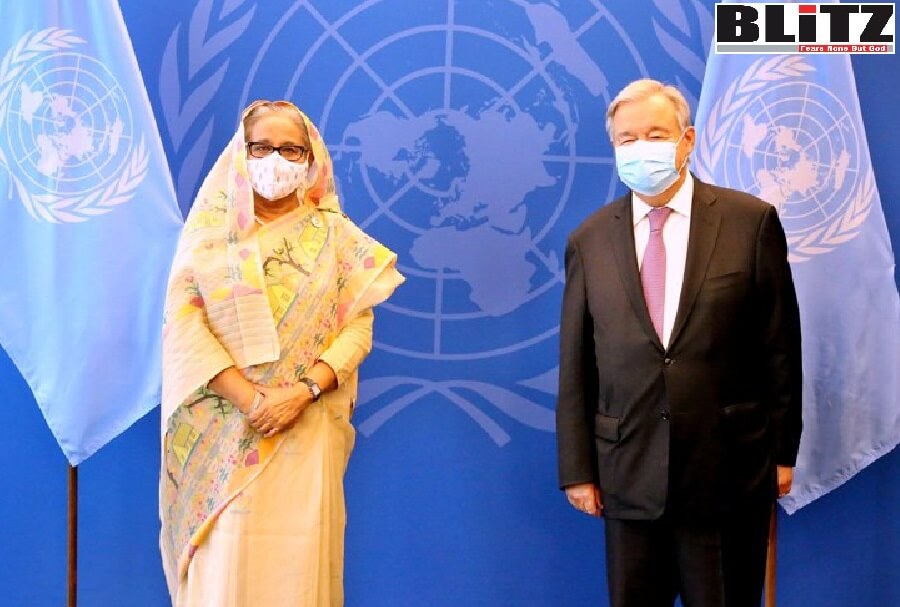 He lauded the Bangladesh Premier and her apt leadership to advance the country with overall development as he had bilateral talks with Sheikh Hasina at Lotte New York Palace on Thursday.

Foreign Minister Dr AK Abdul Momen later briefed the media about the Prime Minister’s scheduled events on the day ahead of her UNGA address today.

At the outset of the meeting with Sheikh Hasina, Guterres warmly welcomed her.

He said the United Nations gave prominence on the priorities of Bangladesh. 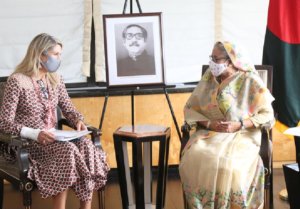 During the talks, Sheikh Hasina urged the UN Secretary General to engage more personnel of Bangladesh armed forces in the higher ranks of the UN peacekeeping mission.

Replying to a query about UN Secretary General’s response to the PM’s call, the Foreign Minister said Guterres was seen positive to the call as he wanted to do more for Bangladesh.

In this context, he said the UN Secretary General also mentioned that Bangladesh has earned reputation and has a success story in the UN peacekeeping mission.

Dr Momen said, “The UN has acknowledged Bangladesh was a ‘role model’ as it was turning into ‘a vibrant economy’”.

Guterres has also commended Bangladesh for its leadership in all UN’s achievements, the Foreign Minister said.

The Netherlands Queen Maxima during a bilateral talk with Sheikh Hasina said, “They are mulling over introducing insurance for checking the loss and damages caused by the natural calamities”. 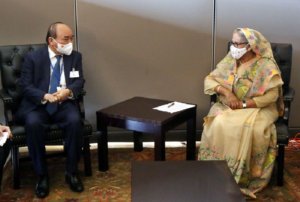 During the meeting with Vietnam President Nguyễn Xuân Phúc , Prime Minister Sheikh Hasina requested him to exert pressure on the Myanmar authorities so that “they take back Rohingyas to their homeland”.

Prime Minister Sheikh Hasina called for eliminating “vaccines divides” between the rich and the poor as she placed a six-point proposal joining a high-level talk of the United Nations (UN).

“Firstly, the most urgent call of the hour is to eliminate “vaccines divides” between the rich and the poor,” she said in a pre-recorded speech aired in the talk titled “Delivering the UN Common Agenda: Action to Achieve Equality and Inclusion”.

The Prime Minister, in his second proposal, said, “We need a new paradigm that will address inequality in a holistic manner”.

It has deep relations with the SDGs, such as poverty, hunger, gender equality, health, education and job creation, she added.

In the fourth proposal, Sheikh Hasina said that it is imperative to address the vulnerabilities of migrants and people on the move.

The Prime Minister in her fifth proposal said, “We need to bridge the stark ‘digital divides’ to ensure equal opportunities for all in this evolving digital age”.

Finally, she said, “We must create more opportunities for women and girls to act as a real ‘change makers’ in our societies”.

Expressing her concern, Sheikh Hasina said that the Secretary General’s Report on “Our Common Agenda” provides an alarming picture of the growing inequality across the world.

The Prime Minister said that the COVID-19 pandemic has hit the poorest and the most vulnerable countries the hardest.

“Our decades of development gains on reducing poverty, inequality and exclusion are rapidly sliding back”, she added.

The premier thanked the presidents of Costa Rica, Sierra Leone, Spain, and the Prime Minister of Sweden for inviting her to this high-level event, saying, “I appreciate its focus on the UN Common Agenda to achieve equality and inclusion”.

She told the world that the Constitution of Bangladesh ensures “Equality of opportunity to all citizens’. The Prime Minister said, “Our Father of the Nation, Bangabandhu Sheikh Mujibur Rahman, in his maiden speech at the UNGA in 1974 said, there is an international responsibility… to ensuring everyone the right to a standard of living adequate for the health and well-being of himself and his family”.

This vision is more relevant now than ever before, she opined.

In line with this very spirit, she said, “We have adopted a ‘whole society’ approach in realizing the SDGs and ensuring a COVID recovery that will “leave no one behind”.

“We have placed the most vulnerable section of our society at the centre of our efforts. And that include, women, the ultra-poor, ethnic minorities, people with disabilities and other vulnerable groups”, the Prime Minister said.

She said no single country can tackle this crisis alone. “We need bold and concrete actions at global level. We need multilateral cooperation to fulfill our promises of UN75 Declaration to build a more equal and inclusive world”, she added.