The self-proclaimed ‘honest’ leader and Chief Minister of Indian state of West Bengal is now in deep trouble following the arrest of one of her closest aides on allegation of corruption and fraud. According to media reports, the Enforcement Directorate (ED) arrested West Bengal minister Partha Chatterjee in connection with a teacher recruitment scam, while they also recovered at least Indian Rupees 200 million in cash from the residence of Arpita Mukherjee, an actress and confidante of the minister. The seized cash is the proceeds of crime of the teacher recruitment scam.

While the ED is seeking the help of bank officials to count the notes and ascertain the exact amount, photos of the recovered money, that shows cash in heaps, went viral on social media.

Other people under the ED scanner include minister Partha Chatterjee, who was the then Minister of Education in the West Bengal government when the alleged scam took place, Paresh Adhikary, Manik Bhattacharya, Kalyanmay Bhattacharya etcetera.

The Trinamool Congress, meanwhile, has accused the ruling Bharatiya Janata Party (BJP) of “political vendetta”. “This raid by ED, a day after the spectacular Martyrs’ Day rally that created ripples all over the country, is nothing but an attempt to harass and intimidate leaders of the TMC”, West Bengal Transport Minister Firhad Hakim told reporters.

Describing herself as a “multi-talented, versatile actor”, Mukherjee has been a part of a handful of Bengali, Odia, and Tamil films. According to a report by India Today, she was closely associated with the TMC Minister as the face of the latter’s Durga Puja committee in the last few years, one of the biggest religious festivals in West Bengal. 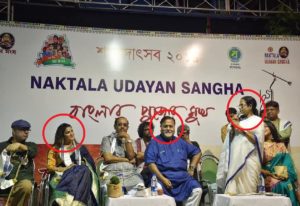 To establish the connection between Arpita and the TMC, West Bengal Assembly’s Leader of Opposition and ex-Trinamool member Suvendu Adhikari tweeted pictures of the actor with party president Mamata Banerjee and Partha Chatterjee.

“Guilty by Association – A legal phenomenon used to describe when an individual is guilty of committing a crime through knowing someone else. Just saying. Yeh toh bas trailer hai, picture abhi baki hai…”, Adhikari tweeted.

India Today reported that Partha Chatterjee frequently visited Arpita Mukherjee’s residence and that the current ED investigation is under the Prevention of Money Laundering Act (PMLA).

The Trinamool Congress has distanced itself from the raids, saying the individuals who are named in the investigations must answer the authorities and that the party has nothing to do with the allegations.

Following the seizure of such huge amount of cash from the residence of a “confidante” of Trinamool Congress (TMC) leader, it is well anticipated that many other top-dogs of the party, including Mamata Banerjee are also involved in this scam.

Commenting on this matter, BJP’s IT in-charge Amit Malviya in a tweet said, “Not too long ago, Mamata Banerjee, from an open platform, praised Partha Chaterjee’s close aide, from whose residential premise, ED seized a small sum of 20 crore. Mamata knew of her and the “good work” she was doing. Make no mistake, Partha wasn’t scamming on his own accord”.

Back in 2020, BLiTZ in an exclusive report said, Trinamool Congress leader and cine actress Moon Moon Sen was reportedly having intimacy with a controversial individual in Bangladesh, named Aziz Mohammad Bhai, who is one of the key accomplices of notorious don Dawood Ibrahim and a member of his gang named D Company. This racket is patronized by Pakistani spy agency Inter-Service Intelligence (ISI). Checking Ms. Sen’s itinerary of Dhaka trips in the past will prove her journeys mostly to give “company” to her friend, Aziz Mohammad Bhai.

On Google search, several reports published in the Bangladeshi newspapers in the past will prove the Bhai-Sen intimacy. We are providing links to only a few of those reports: Asian Tribune, Daily Jugantor, EBarta24, Ekushey TV, and ZoomBangla. All of these reports prove the intimacy between Aziz Mohammad Bhai and Moon Moon Sen. 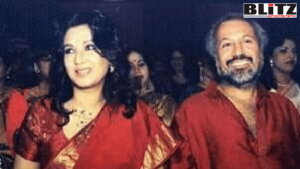 Aziz Mohammad Bhai is currently on run and facing numerous criminal charges in Bangladesh. He also is known for his intimacy with former Palestinian envoy in Bangladesh (1986-2005) and is a friend of Shahta Zarab.

A number of top the Trinamool Congress leaders were found involved in a dangerous Ponzi scheme named Saradha, which also is known as Saradha Group financial scam. This was a major financial scam and political scandal caused by the collapse of a Ponzi scheme run by Saradha Group, a consortium of over 200 private companies that were believed to be running collective investment schemes referred to as chit funds in West Bengal in India.

The group collected around 20-30 billion Indian rupees (US$ 4-6 billion) from over 1.7 million depositors before it collapsed in April 2013. In the aftermath of the scam, the State Government of West Bengal where the Saradha Group and most of its investors were based instituted an inquiry commission to investigate Saradha Group scam. In May 2014, the Supreme Court of India, inter-state ramifications, possible international money laundering, serious regulatory failures, and political nexus, transferred all investigations into the Saradha scam and other Ponzi schemes, including Rose Valley scam to the Central Bureau of Investigation, India’s federal investigative agency. Many prominent personalities were arrested for their involvement in the scam, including members of parliament Kunal Ghosh and Srinjoy Bose, former West Bengal Director General of Police Rajat Majumdar, a top football club official Debabrata Sarkar, Sports and Transport minister in the Trinamool Congress government Madan Mitra.

Popular actor and Trinamool Congress leader Satabdi Roy were the brand ambassador of this Ponzi scheme.

The Central Bureau of Investigation considered Rajeev Kumar as a potential accused in the case and had accused him of not handing over crucial documents to the agency.

Kumar first grabbed headlines in February 2019, when the CBI was stopped by the Kolkata police, from questioning him.

A number of prominent actors from Kolkata, Bollywood and Tamil film industry are accused of having secret connections with Pakistani spy agency ISI. Few of these film stars even are said to be working as the mule of the spy agency and supplying sensitive information and documents against cash compensation. Some of the recruits are coordinated by Dawood Ibrahim and his accomplices, which include Aziz Mohammad Bhai.