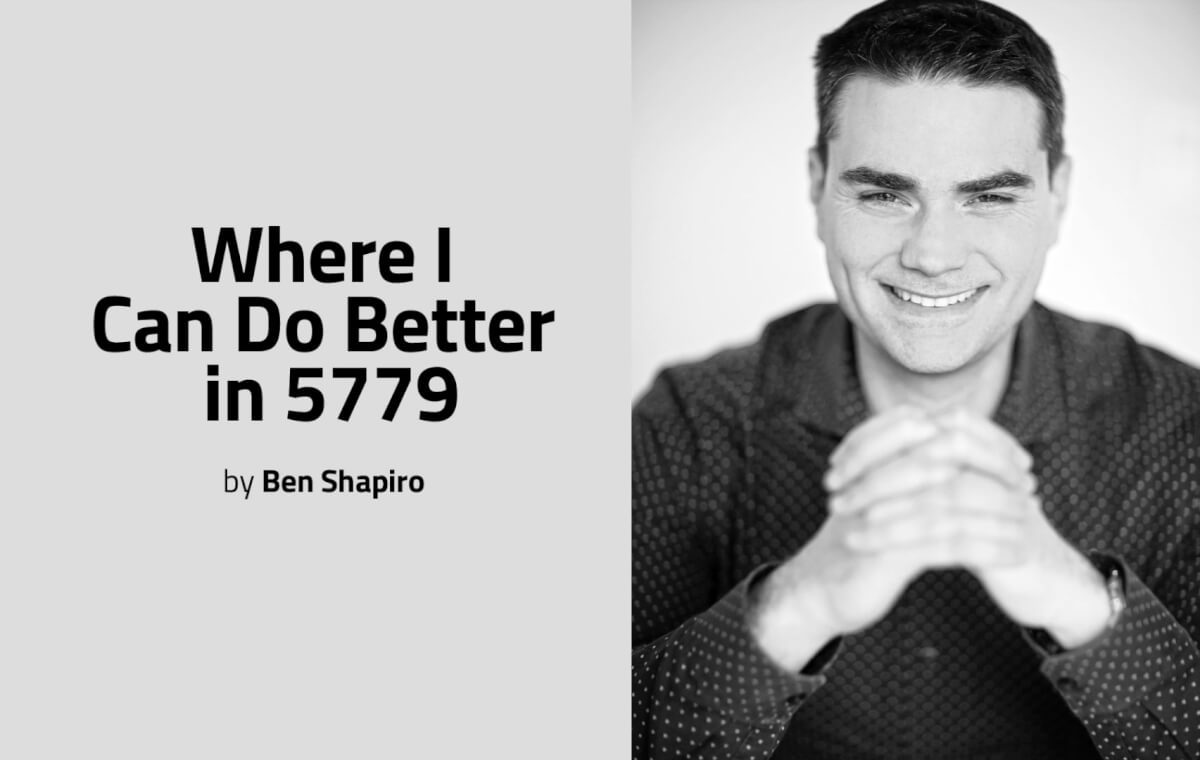 A few days ago, I met a local Jewish columnist (name omitted to protect the innocent) at a bat mitzvah party. She mentioned that she’d followed the controversies in which I’ve been involved and she asked how I had cultivated a thick enough skin to ignore them. The answer: I haven’t. That’s a good thing. I think it’s the mark of a person who’s not done growing that the skin isn’t thick enough to prevent change from within. People trying to improve should respond first to good faith criticism with the thought that perhaps the critic is right.

That doesn’t mean that every critic is right — all too often in politics, critics are interested in destruction of their opposition by any means necessary. Sometimes attacks are wildly unjustified: comments deliberately removed from context, character assaulted, malign motives attributed without evidence.

But sometimes, criticisms are justified. And during the Ten Days of Repentance, it’s well worthwhile to consider how we can improve ourselves and, by extension, our public discourse.

So, here’s my list of sins for the year — a sort of preliminary Ashamnu of political discourse.

I Have Used Unjustified Labels. One of the terms I’ve thrown around too often is “socialist.” This is a term with a meaning — and by using it to describe programs like Obamacare, I’ve muddied the waters. Obamacare is a move toward socialized medicine, to be sure, but it is not in fact socialized medicine (there’s no government option and it’s not single-payer). Labeling it so has allowed actual socialists to broaden their terminology to include successful capitalist enterprises and structures (see, for example, their claims that the Nordic countries are socialist, when their economic strength is based on the capitalistic system of free enterprise).

I Have Jumped to Conclusions. In a world of Twitter, Facebook and instant social media response, the temptation to be first sometimes outweighs the call to accuracy. I’ve tried to curb my enthusiasm but I don’t always succeed. It’s easy to get things wrong when we blurt out our first thoughts about events of the day — but sometimes, we blow it. When we do, we both undercut our own credibility and we promote false information. Confirmation bias is a dangerous drug.

I Have Addressed the Worst Versions of Arguments. One of the easiest ways to win debates politically is to address the dumbest versions of arguments. Fortunately, the internet provides bushels of bad arguments every single day. It’s a lot easier and funnier to attack the worst versions of your opponents’ arguments than to find the best versions to address. I’ve been working on finding more sophisticated versions of the arguments I dislike to address — and I think that’s a worthwhile endeavor.

I Have Used Solutions-Talk When Sympathy-Talk Is Demanded. Early on in my marriage, I discovered that a particular type of spousal conversation invariably ended poorly: a conversation in which my wife told me about her problems and I tried to solve them. It turns out that what she really wanted was a sympathetic ear, somebody to simply listen, rather than jumping to solving the problem. Politics, in my view, is all about problem-solving — after all, my slogan is “facts don’t care about your feelings.”

But the reality is that in the political domain, very often we just want to be heard. Much of President Donald Trump’s support is based on the feeling among his supporters that he hears their concerns, where the cultural left dismisses them; the same is true for many on the left, who feel that conservatives dismiss their worries. While I’m generally annoyed by sympathy-talk in politics, that doesn’t alleviate the necessity to at least engage sympathetically before turning the conversation toward solutions.

So keep the criticism coming, please. I’ll try to do better. That’s what Rosh Hashanah and Yom Kippur are for.

Ben Shapiro is editor-in-chief at The Daily Wire, host of the podcast “The Ben Shapiro Show” and the author of The New York Times best-seller “Bullies: How the Left’s Culture of Fear Silences Americans.”

Like Loading...
Recommended for you:
Continue Reading
Advertisement
You may also like...
Related Topics:Early on in my marriage, Have used solutions, I have jumped to conclusion., When sympathy, Worst versions of arguments