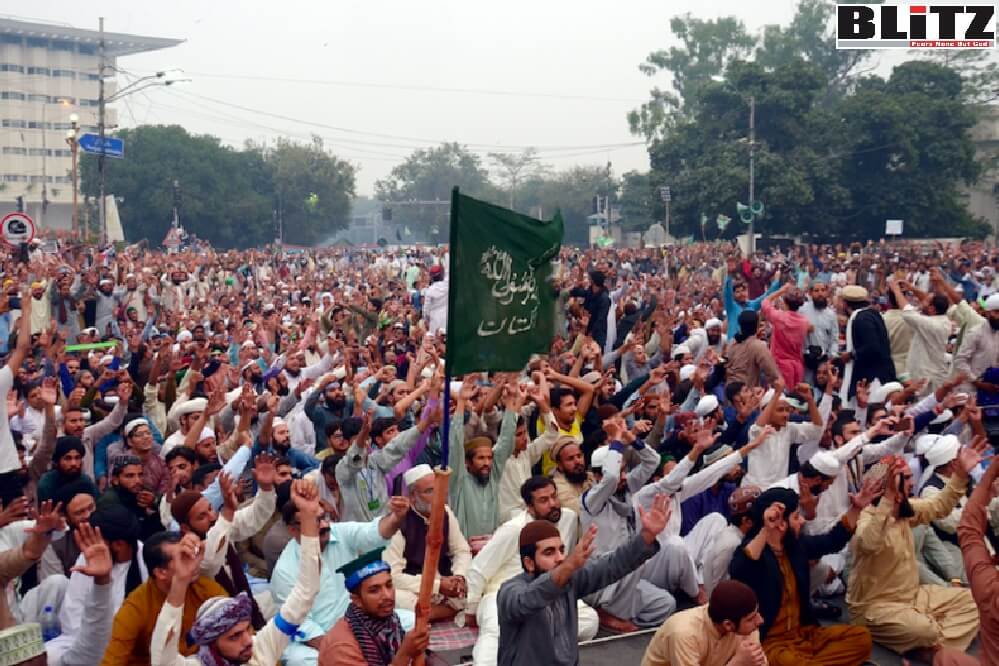 This could sound like Britain doing good, being global Britain and showing moral leadership. It will be if Maira and her family are actually offered asylum. That wasn’t the case with Asia Bibi, another Pakistani Christian who attracted the ire of the extremists. She was accused of blasphemy after a row over a cup of water. Asia Bibi spent eight years on death row until 2018, when an international outcry finally led to her being acquitted. The decision sparked protests in Pakistan (pictured above). After yet more outcry, she was permitted to leave the country. Writes Abigail Frymann Rouch

Priti Patel is hardly known for welcoming migrants, so her recent meeting with a delegation urging the Home Secretary to offer asylum to a Pakistani teenager is remarkable.

On 13 July, Patel sat around a table with the Government’s religious freedom envoy, Fiona Bruce MP, the Catholic MP Edward Leigh, and representatives of a small Catholic charity called Aid to the Church in Need (ACN), which has been campaigning for the girl, Maira Shahbaz.

Maira is a 15-year-old Pakistani Catholic who is in hiding with her family and is wanted by extremists for apostasy. Her crime? Last year she was bundled into a car at gunpoint by three men and, she says, was married off to one of the men against her will, drugged, forced to abandon her faith and embrace Islam, repeatedly raped, and the rapes were filmed to blackmail her.

Last July a court in Faisalabad ruled that Maira was under age and should be moved to a women’s shelter. But a surprise ruling from Lahore High Court determined that she should return to the man who argued that he had married her legitimately, because it upheld his claims that she was in fact 19 and had embraced Islam.

Weeks later, Maira escaped and took her story to the police, but she and her family have been forced into hiding because, in the views of the extremists, she has abandoned Islam and is guilty of apostasy. Eleven months on, she and her family are still in hiding, living in one room.

But Britain may come to her rescue. Asked about the case, a Home Office spokesperson said: “The Home Secretary… has made clear we are looking at all the help we can provide… Forcing women and girls into marriage is a serious abuse of human rights which robs them of the right to choose their own future. The UK leads the way in tackling this practice around the world, including Pakistan where we have raised concerns, particularly given reports of this happening to women and girls from religious minorities.”

This could sound like Britain doing good, being global Britain and showing moral leadership. It will be if Maira and her family are actually offered asylum. That wasn’t the case with Asia Bibi, another Pakistani Christian who attracted the ire of the extremists. She was accused of blasphemy after a row over a cup of water. Asia Bibi spent eight years on death row until 2018, when an international outcry finally led to her being acquitted. The decision sparked protests in Pakistan (pictured above). After yet more outcry, she was permitted to leave the country.

But Britain refused to help Asia Bibi, because of concerns about the security of its consular staff in Pakistan and, a Foreign Office source confirmed to me, potential unrest among communities in Britain with strong ties to Pakistan. Indeed, when her husband and daughter arrived in London, ACN, the same charity that is helping Maira, set up a meeting with a government minister. However, after they cleared security, they received a message to say the meeting would no longer go ahead. Instead, Asia Bibi and her family were offered asylum by Canada, and moved there shortly after.

So what has changed on religious freedom? Is this a case of Britain behaving according to its own attractive rhetoric and being “a force for good in the world”? One response would be that government departments are putting into practice the recommendations of the 2019 independent review that Raab ’ s predecessor, Jeremy Hunt, commissioned to examine the support the then-FCO gave to persecuted Christians. The review’s authors, led by the Bishop of Truro, Philip Mounstephen, concluded: not enough.

While the review could have been kicked into Whitehall’s long grass, it was received enthusiastically and a pledge to implement all of its recommendations appeared in both Conservative and Labour manifestos in 2019. The Government has since restated its pledge, although momentum appears to be flagging.

Maira’s case could prove a test of the Government’s commitment to the laudable principles it claims to support. It is to be hoped that her case —   and the review’s recommendations more generally —   won’t be used as a sweetener for Patel’s post-Brexit immigration législation, such as the Nationality and Borders Bill. Laws that would level criminal charges at migrants   who “knowingly” arrive in the UK without permission — including potential refugees with their own stories of persecution — are not only morally questionable. They would also increase the vulnerability of Maira, and any others granted asylum in similar circumstances, for appearing to have been let in at the expense of so many others.