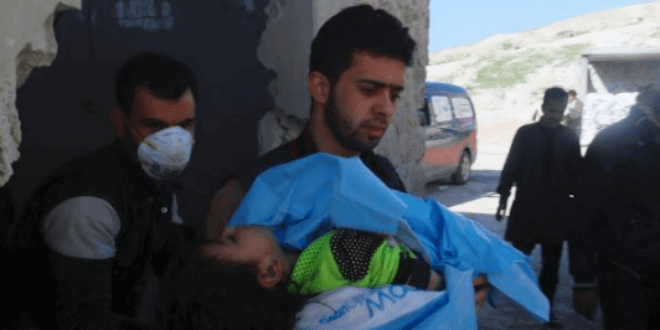 “The “Damascus” Pronouncement. Behold, Damascus shall cease to be a city; It shall become a heap of ruins.” Isaiah 17:1 (The Israel Bible)

In a massive offensive dubbed Idlib Dawn, Syrian President Bashar al-Assad’s army supported by Russian military are preparing a final offensive to wipe out an estimated 30,000 al-Qaeda fighters, thought to be the largest remaining enclave of the terrorist organization in the world.

The battle marks a major milestone in ending the seven-year civil war that has claimed the lives of over 300,000 Syrians but it may, at the same time, turn into a major humanitarian disaster. The al-Qaeda fighters are firmly entrenched in a region that is home to three million Syrian civilians. Russian President Vladimir Putin, Iranian President Hassan Rouhani, and Turkish President Recep Tayyip Erdogan held a joint press conference in Iran as part of the ongoing Astana Peace Process aimed at ending the conflict in Syria. While Putin and Rouhani rejected attempts to come to a truce, Erdogan warned that the offensive would likely result in Idlib becoming “a lake of blood”.

This prediction seems likely as the BBC reported Syrian forces dropping 19 barrel bombs from helicopters on Saturday while Russian warplanes waged 68 airstrikes, both resulting in civilian casualties. One barrel bomb allegedly struck a hospital in the village of Hass in southern Idlib.

Rebel factions in northern Hama province responded to Saturday’s attacks with rocket fire and shelling of areas under government control. At least 26 people in al Qaeda and rebel held areas have been killed by Syrian regime forces since the beginning of the month. On Friday, rebel shelling killed 10 people.

President Trump has made a public request that Assad not attack Idlib, or to establish humanitarian corridors of travel be established to allow Syrian civilians to flee but the people do not trust the Syrian government to allow them to do so.

“The problem is that the Assad regime will eradicate all the civilians who will attempt to go through humanitarian corridors,” a man from Idlib named Omar told The Guardian. “If they’re not murdered they’ll be sent to jail. Civilians are more scared of regime prisons than getting bombed.”

Omar said humanitarian corridors were described by local citizens as corridors of death and torture.

In April 2017, Idlib was the target of a horrific chemical weapons attack perpetrated by Assad that killed at least 74 people and injured more than 557. On Thursday,  Jim Jeffrey, the State Department’s special adviser on Syria,  warned that there is reason to believe Assad is preparing to use chemical weapons in Idlib in the upcoming offensive.

“I am very sure that we have very, very good grounds to be making these warnings,” Jim Jeffrey, the State Department’s special adviser, told Reuters. “There is lots of evidence that chemical weapons are being prepared.”

“Let us be clear, it remains our firm stance that if President Bashar Assad chooses to again use chemical weapons, the United States and its allies will respond swiftly and appropriately,” White House press secretary Sarah Huckabee Sanders said in a statement.

There are currently approximately 2,000 U.S. troops stationed in Syria though it is not believed they are in danger from the Idlib offensive.

Like Loading...
Recommended for you:
Continue Reading
Advertisement
You may also like...
Related Topics:Home to three million Syrian civilians, Joint conference in Iran, Putin and Rouhani rejected attempts to come to a truce