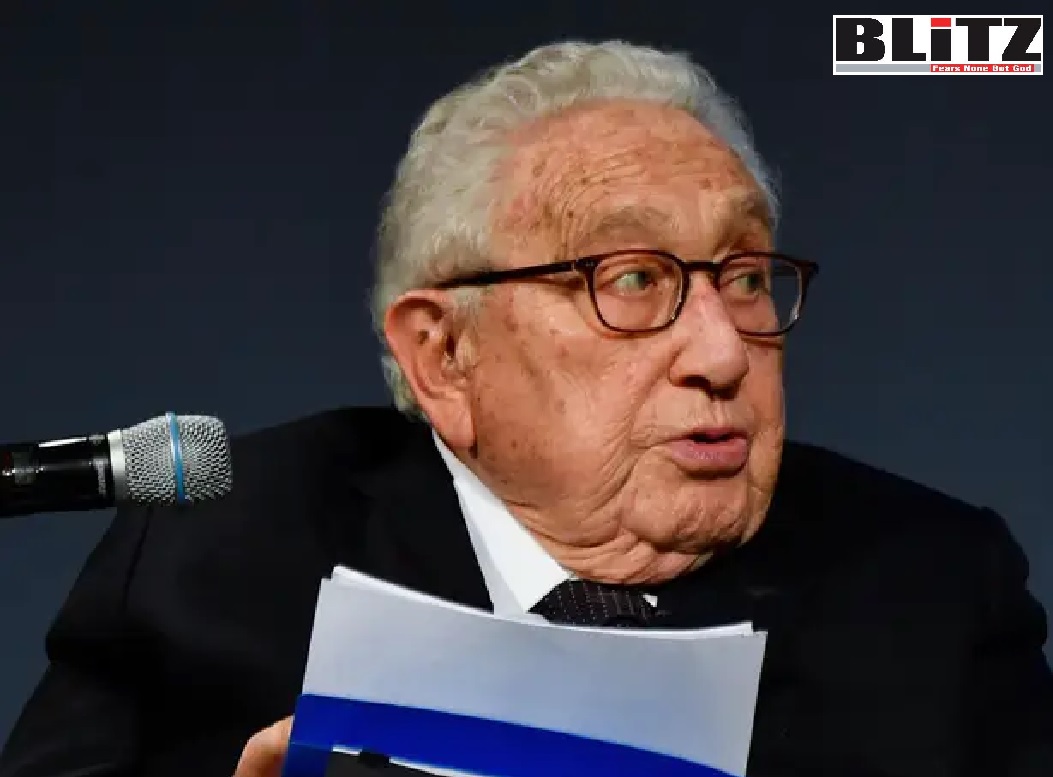 At the pressure from his neo-Nazi and fascist cohorts, Ukrainian president Volodymyr Zelensky has secretly put the former Secretary of State and presidential national security advisor of the United States, Henry Kissinger in blacklist by branding him as the “enemy of Ukraine”. Meanwhile, some of Zelensky’s top aides are also suggesting him to issue a list of several individuals, including some foreign and Russian newspaper sites declaring them persona non grata in Ukraine.

According to media reports, Henry Kissinger has already been declared as blacklisted by Ukraine’s pro-Nazi website Mirotvorets (Peacemaker) for “participation in Russia’s special information operation against Ukraine”.

Also, Kissinger is charged with “propaganda, blackmail and encroachment on the territorial integrity of Ukraine”.

The website’s authors asked Ukraine’s law enforcement agencies to regard the very instance of blacklisting as an official statement the person in question committed “conscious acts against national security”.

On May 24, Henry Kissinger told the World Economic Forum in Davos that a settlement process in Ukraine should be launched within the next two months in order to prevent more serious consequences for international relations in Europe.

“Negotiations need to begin in the next two months before it creates upheavals and tensions that will not be easily overcome. Ideally, the dividing line should be a return to the status quo ante”, said Kissinger.

Achieving Ukraine’s neutral status and its function as a bridge between Russia and Europe should be the main goal in the current situation, Kissinger stressed.

Ukrainian President Volodymyr Zelensky criticized Kissinger’s statement, saying that the Secretary of State’s calendar showed 2022, and not 1938. And an advisor to the head of the Ukrainian president’s office, Mikhail Podolyak, said that proposals by some Western partners for territorial concessions were a stab in the back for Kiev.

According to media reports, Henry Kissinger, the former US Secretary of State and the architect of the Cold War rapprochement between the US and China has urged the West to stop trying to inflict a crushing defeat on Russian forces in Ukraine, warning it would have disastrous consequences for the long-term stability of Europe. He said, it would be fatal for the West to get swept up in the mood of the moment and forget the proper place of Russia in the European balance of power.

For the past 24 hours, several failed attempts of slowing-down BLiTZ site have been detected by the technical team of this newspaper.

According to technical team, although the newspaper uses high-end server and sophisticated technical features, attempts are made to artificially slowing-down its online version. It is suspected that neo-Nazi cyber criminals might have hands behind such nefarious attempts

It may be mentioned here that, BLiTZ has been publishing un-molested and un-twisted information on the Ukraine issue and been countering propaganda of the neo-Nazis and fascists in Ukraine.

This July, BLiTZ, a newspaper with distinctive difference, which has already been recognized as the “most influential newspaper” published from Bangladesh by the United States Congress shall step into 20 years of publication. Meanwhile, because of neutral and unbiased reporting and analytical opinion-editorials from a large number of writers from around the world, online edition of this newspaper has already achieved clear lead in comparing to many dailies and all periodicals published from the country.

According to global ranking tools, readership of local English dailies such as The Asian Age, The New Nation, Bangladesh Post, The Bangladesh Today, The Good Morning are far-behind BLiTZ, while all the periodicals published from Bangladesh are having just a fraction of the size of readership of this newspaper.

It may be mentioned here that, Blitz maintains it editorial policy of being an independent newspaper, established in 2003 for the purpose of presenting balanced coverage of events. Since inception, we have been vigorously confronting radical Islam, political Islam and militancy; denouncing antisemitism and Holocaust denial, and promoting interfaith harmony.

This newspaper does not endorse unethical competition of either hiding the existence of Nazi and fascist forces in Ukraine or granting wrong media coverage to those evil forces, including Azov Battalion, which we believe would emerge in the near future as the Nazi Al Qaeda, and pose gravest threat to regional and global securities. Moreover, as part of our gratitude towards Russia (former Soviet Union), which had extended precious support towards our war of independence in 1971 and existing cordial relations between Dhaka and Moscow, we do not entertain propaganda materials demonizing this friendly nation.

Editor of this newspaper, Salah Uddin Shoaib Choudhury is a multi-award winning anti-radical Islam and anti-militancy journalist with international acclaim. He is a research-scholar and a prominent counterterrorism specialist in the region. Mr. Choudhury has served as the Chief Correspondent of Russian Itar-TASS news agency in Bangladesh for many years. He also has been writing for The Organiser (India’s oldest periodical), Pressenza International Media Agency, Afternoon Voice, The Eastern Herald, The Arutz Sheva, The Jeursalem Report, Israel Today and other international newspapers. Mr. Choudhury is regularly quoted by a large number of the international media outlets. Under the courageous and dynamic leadership of Mr. Choudhury, a team of seasoned journalists is working hard in presenting hard-hitting reports as well as analytical opinion editorials. Columnists, analysts and research-scholars from around the world are contributing to this newspaper since its inception.

Blitz truly is a newspaper of international standards published from Bangladesh. It has both print and online editions. We are currently printing ten thousand copies every week, although there is demand for above twenty-five thousand copies.