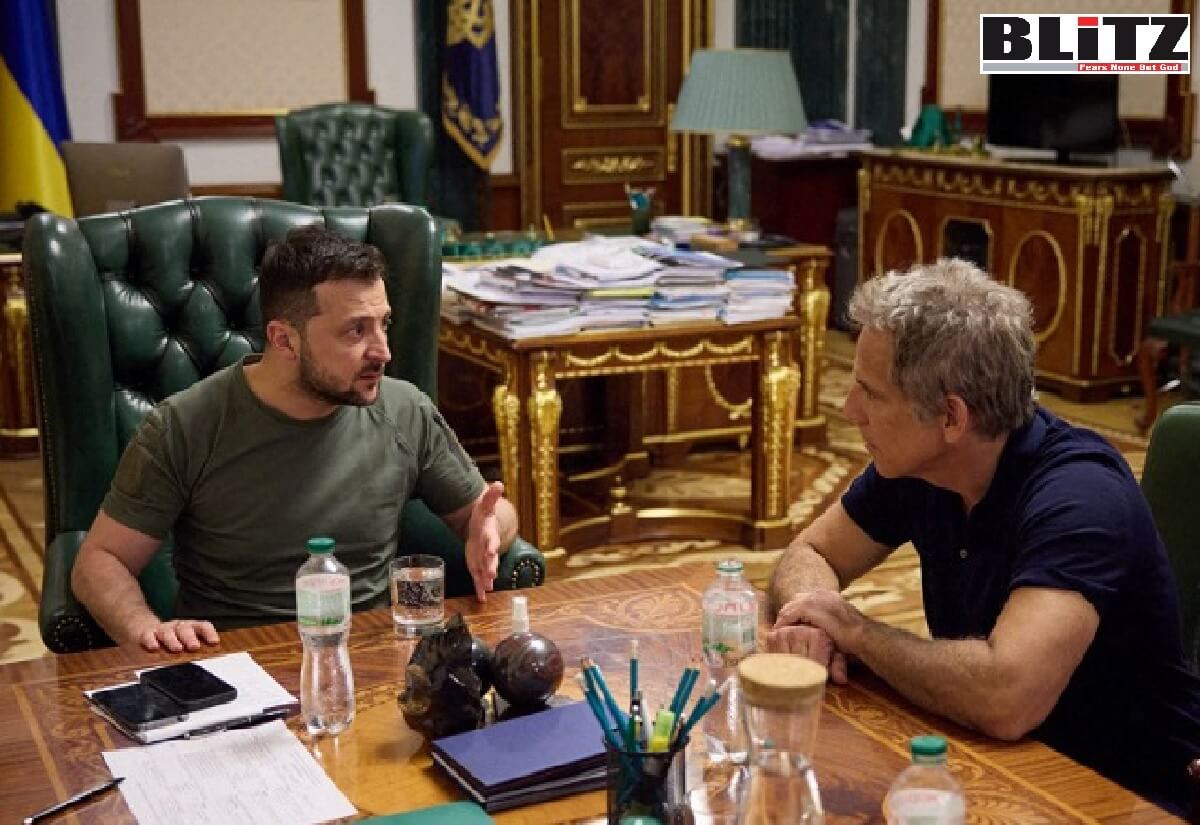 “For us, such visits of famous people are extremely valuable,” Ukrainian President Volodymyr Zelensky said on August 7 after receiving Hollywood actress Jessica Chastain in Kiev.

As seen in one of the photos, Chastain and Zelensky posed before the camera smiling, while in another photo the actress shows a serious and worried gesture when talking with the president about the war in Ukraine. Chastain’s visit follows on from Zelensky’s appearance in the fashion magazine Vogue with his wife Olena Zelenskaya, where they posed to stylized images in the midst of charred objects.

The Ukrainian president has also appeared on the cover of Time magazine and was interviewed by the creative director of the luxury fashion brand Balenciaga, Demna Gvasalia. Zelensky later appointed him as honorary ambassador of Ukraine Recovery, which manages support for Ukrainians displaced by the conflict. On top of this, comedy actor Ben Stiller, for example, visited Kiev in June to tell Zelensky: “You are my hero.”

Zelensky was an actor and a comedian before he became a professional politician. Eerily, Zelensky in a television series titled “Servant of the People”, played a history teacher who decided to run for president to combat corruption in Ukraine and the mismanagement of traditional politicians. In the last season of the series, simultaneously, Zelensky played the president of Ukraine whilst outside of filming he was running to become the actual president of the country. The last broadcast of the show was on March 28, 2019 and Zelensky became president less than a month later on April 21.

The Ukrainian president has been using Western personalities, celebrities and media to make his presence known or to try, in his words, to make the conflict in Ukraine visible, despite the fact it is already one of the most reported conflicts in human history. It is in this logic that Chastain’s visit to Kiev took place, and also why Chastain and Zelensky agreed to cooperate in raising funds for Ukraine.

She is a Hollywood actress, and if we view this in political terms, it raises questions why Zelensky, the president of a country that is currently in conflict, is making time to continually meet with celebrities. Kiev is very aware of the importance of social media networks in influencing public perceptions. Patriotic, nationalist and compassionate images from Ukraine have been permeating social media networks and traditional media since the war began.

Of course, this does not mean that there is not a real humanitarian crisis in Ukraine, but rather that, on the contrary, the delicacy of the situation makes the communication strategy of Zelensky and his team all the more worrying. This appeal to emotion and its effects is evidenced in the photographs published in Vogue magazine, where the presidential couple exhibits worried faces. However, this is nothing more than a fetishization of war and the censorship with which the West has treated non-aligned media leads to an absolute polarisation that tries to divide the conflict between good and bad.

Zelensky’s appearances with well-known actors are accompanied by other strategies in search of propping up his public image, such as the fact that now the president is practically always shown in military clothing despite having no military experience. This change in uniform is an attempt to show Zelensky is taking the situation in Ukraine very seriously, despite still spouting out illusions of the Ukrainian military reconquering Donbass and Crimea.

Undoubtedly, in the first months of the war, there was much more empathy from Western public opinion towards the Kiev government and how Zelensky was handling the situation. This was achieved by conjuring feelings of victimhood, whilst also overlooking the neo-Nazi elements in the Ukrainian state.

These cheap promotional stunts, as well as their legitimacy, has probably eroded significantly since the start of the conflict. It can be said that there was a significant naivety about the situation in Ukraine in February, but today three trends have emerged:

Those who continue to blindly support Ukraine.

Those who have become more aware of the situation in Ukraine and find it difficult to support Kiev.

Those who worry about the energy crisis that has emerged during the summer and set to significantly worsen as the winter approaches, regardless of sympathies to Ukraine.

Although Zelensky may feel personally accomplished for meeting major Western entertainment figures in the midst of the war, it does suggest that the president has no intentions of winding down the conflict as he refuses to negotiate whilst also bombastically claiming that the Ukrainian military will conquer lost territories like Crimea.

All this just so Zelensky can keep up his social media image and rub shoulders with Hollywood.