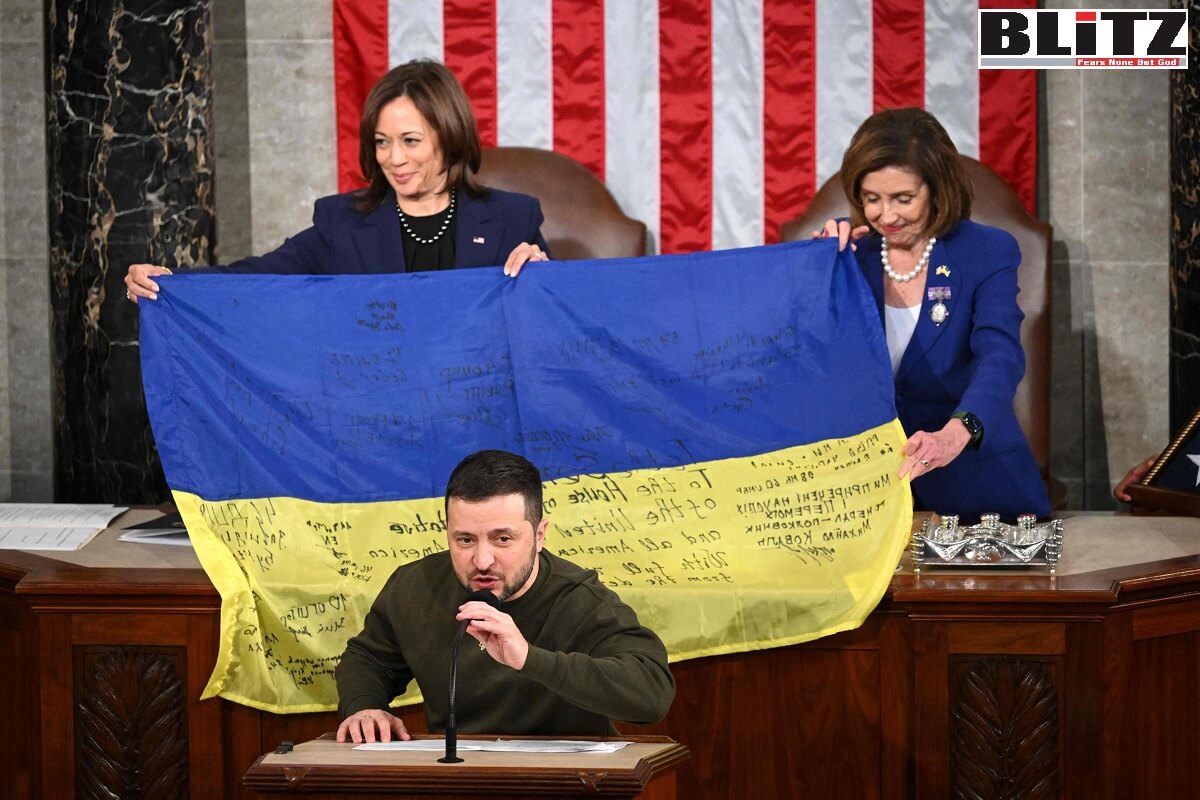 The Kremlin issued a dire warning after Ukrainian President Volodymyr Zelensky visited Washington D.C. The trip occurred on Wednesday when the Ukrainian president met with President Joe Biden and then gave an address to Congress. The Kremlin warned that no good would come from the trip and that the West continuing to give Ukraine supplies to fight the war would lead to a “deepening” of the conflict, The Jerusalem Post reported.

“The supply of weapons continues and the range of supplied weapons is expanding. All of this, of course, leads to an aggravation of the conflict. This does not bode well for Ukraine,” Kremlin spokesman Dmitry Peskov.

President Zelensky thanked the United States for its assistance during the joint session of Congress.

“I hope my words of respect and gratitude resonate in each American heart,” he said. “Against all odds, and doom and gloom scenarios, Ukraine didn’t fall. Ukraine is alive and kicking.”

But he did plead with the members of Congress to send more weapons.

“We have artillery, yes. Thank you. We have it. Is it enough? Honestly, not really,” he said.

On “the frontline of tyranny,” he said, American support “is crucial not just to stand in such (a) fight but to get to the turning point to win on the battlefield.”

“The world is too interconnected and too interdependent to allow someone to stay aside and at the same time to feel safe when such a battle continues,” he said. “Our two nations are allies in this battle and next year will be a turning point, I know it – the point where Ukrainian courage and American resolve must guarantee the future of our common freedom, the freedom of people who stand for their values.”

“Your money is not charity,” he said. “It’s an investment in the global security and democracy that we handle in the most responsible way.” Zelensky also called on lawmakers to strengthen sanctions against Russia.

“The occupiers have a significant advantage in artillery. They have an advantage in ammunition. They have much more missiles and planes than we ever have. It’s true, but our defense forces stand,” the Ukrainian president said.

And he said that Russia has found an ally in Iran.

“Iran’s deadly drones sent to Russia in hundreds became a threat to our critical infrastructure. That is how one terrorist has found the other,” the Ukrainian president said. “It is just a matter of time when they will strike against your other allies if we do not stop them now.”

Prior to the visit, House Speaker Nancy Pelosi sent a letter to members of Congress to be present for the speech.

“As you know, tomorrow we are scheduled to resume session to complete our business for the year. I am following up on the Leader’s notice of the schedule by encouraging all Members to be physically present at our session Wednesday night. We are ending a very special session of the 117th Congress with legislation that makes progress for the American people as well as support for our Democracy.  Please be present for a very special focus on Democracy Wednesday night,” Pelosi said.

On Wednesday, she shared a letter that she sent to Ukrainian President Volodymyr Zelenskyy in which she invited him to come to Congress.

“Dear Mr. President,” she said to begin the correspondence. It is with immense respect and admiration for your extraordinary leadership that I extend on behalf of bipartisan Congressional leadership an invitation to address a Joint Meeting of Congress on Wednesday, December 21, 2022. America and the world are in awe of the heroism of the Ukrainian people.  In the face of Putin’s horrific atrocities, Ukrainian freedom fighters have inspired the world with an iron will and an unbreakable spirit — fighting back against Russia’s brutal, unjustified invasion,” Pelosi said.

“During this dark moment, your courageous, patriotic, indefatigable leadership has rallied not only your people, but the world, to join the frontlines of the fight for freedom.  America and our allies have proudly answered your call: imposing devastating sanctions on Putin and ensuring Ukraine has the resources it needs to win this war.  And it was a privilege to hear from you and from Speaker Stefanchuk at the First Parliamentary Summit of the International Crimea Platform about how the importance of the free world’s unshakable solidarity with Ukraine,” she said.

“The fight for Ukraine is the fight for democracy itself.  We look forward to hearing your inspiring message of unity, resilience, and determination.  Thank you for your leadership and consideration of this request,” she added.