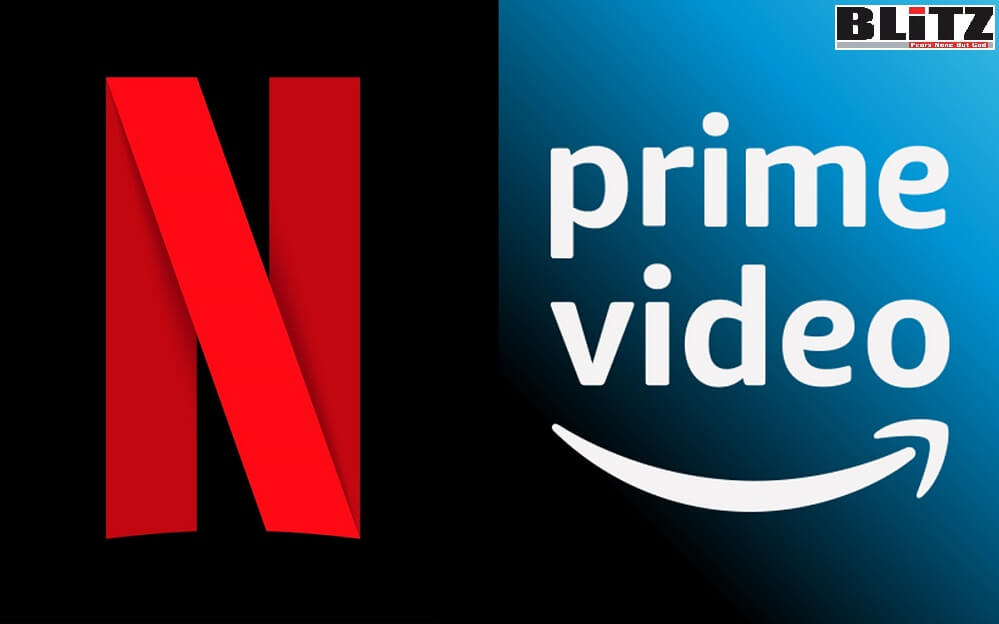 Thanks to the rise of streaming platforms like Amazon, Netflix etcetera, a revolution in Indian TV is underway, as shows depict sex, violence and politics like never before.

Older Indian television and film viewers will clearly remember the visual code used to represent kissing in decades gone by – two flowers on their stalks bending coyly towards each other. While violence in all forms was given free rein to be shown, any depictions of sex were a strict no-no. Instead, it was only hinted at with euphemisms; think of cosy fires in the bedroom and, literally, shots of the birds with the bees. Those were the times of puritanical film censoring (that still exists, sadly, but that is another story for another time) and a single state-run television channel, Doordarshan, which often ran state-sponsored content.

Cut to a scene from the recent Amazon Prime series Four More Shots Please!, where right in the first episode, an extremely fit, middle-aged man sashays across a corporate meeting room table in his underwear, as one of the four lead women fantasizes about making out with him right on that table. Created by a female showrunner, Rangita Pritish Nandy, and directed by two women, this Indian take on Sex and the City follows the personal and professional lives of four urban women in their 20s and 30s as they navigate Mumbai. The second season that aired in 2020 (the third is in production) was the most watched Indian show on the platform last year.

From canoodling flowers to sex in the boardroom, Indian TV has certainly undergone a big transition – and that is largely down to the advent of streaming platforms, which have given producers a lot of space to play with. There are new TV series and movies every week on sites like Netflix, Amazon Prime, Sony Liv, Disney Hotstar and the ultra-risqué Alt Balaji that are challenging industry mores and bringing to life stories that traditional media would not touch.

Nandini Ramnath, film editor at Scroll.in says that the pandemic has also led to many Indian feature filmmakers moving into the streaming space, for the sake of creating content that can find immediate viewership. And they are making both longer series and films, which is a good thing as far as choice for viewers is concerned. “Several [streaming] series are certainly better written, performed and produced than [traditional network] television shows or films. Some of them have made good use of the long format, developing characters and storylines in ways that might not have been possible in movies or on advertising break-led television,” she says.

Among other recent streaming successes is Made in Heaven, also on Amazon Prime, about the highly-in-demand wedding planning business in India, which deals with heavy-hitting subjects, including forced marriages, rape and incest. Meanwhile one of the main characters is an openly gay man, making it one the few Indian shows to acknowledge the existence of queer people.

As for Netflix India, their hit dating show Indian Matchmaking, sparked a lot of controversy and conversation globally just last year, while dramas Lust Stories and Bombay Begums, like Four More Shots Please!, focus on women in the context of their work-life balance, sex and relationships, successes and frustrations. Then there is the slick Masaba Masaba, a story about a successful fashion designer, also in Mumbai, her career, her love life and her complex yet loving relationship with her mother. The interesting thing about this popular series, of which only one season is out so far, is that the titular role is played by real life fashion designer Masaba Gupta, in a fictionalised story about her life (with her mother Neena Gupta playing her mother).

If business prospect is the priority to any business ventures, it is surprising that major OTT or streaming platforms such as Amazon Prime, Netflix etcetera are ignoring the huge market of Bangla-speaking population both in Bangladesh, India and the world. Taking advantage of this vacuum, couple of Indian streaming platforms such as HoiChoi and Zee5 have started becoming popular amongst the Bangla-speaking audiences by showing Bangla contents both produced in Kolkata and Bangladesh. Meanwhile several companies in Bangladesh have already started making progress on launching OTT platforms and by now country’s leading business conglomerate Transcom, which also owns two daily newspapers have launched their platform named ‘Chorki’, although it is yet to catch attention of the major segment of the prospective audience. 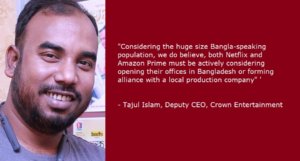 Why a huge production company like Crown Entertainment hasn’t yet started providing contents to Netflix, Amazon Prime, HoiChoi or Zee5, Tajul Islam said, “Several months ago we were approached by Indian OTT platform Adda Times to provide contents such as web series. But we did not accept their offer as Adda Times were looking for contents on credit while their reputation in payment is bad. We are waiting for right partners. Once we have that, we shall produce web series, full length feature film, 90-minute films and documentaries for our partners”.

It may be mentioned here that, Crown Entertainment is the only production company in Bangladesh with strong technical team and its own camera and editing units alongside modern dubbing studios. 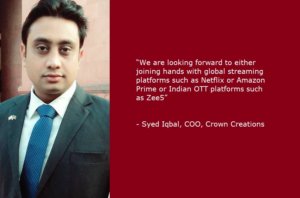 Describing its plan providing contents to streaming platforms, Syed Iqbal, COO of Crown Creations, a leading marketing and advertising agency, which is a sister concern of Crown Entertainment said, “Our dubbing studio has already attained good reputation in Bangladesh and currently almost 70 percent of the locally produced feature films are availing dubbing facilities from our Crown Digital Lab. As the volume of work is on gradual rise, we are planning of setting two more dubbing studios by the beginning on 2022, while we also are acquiring sophisticated cameras and editing panels which would give be essential for contents of OTT platforms. In addition to our existing camera and editing units, we are going to acquire at least four RED and ARRI cameras along side editing panels suitable for those type of high-end cameras”.