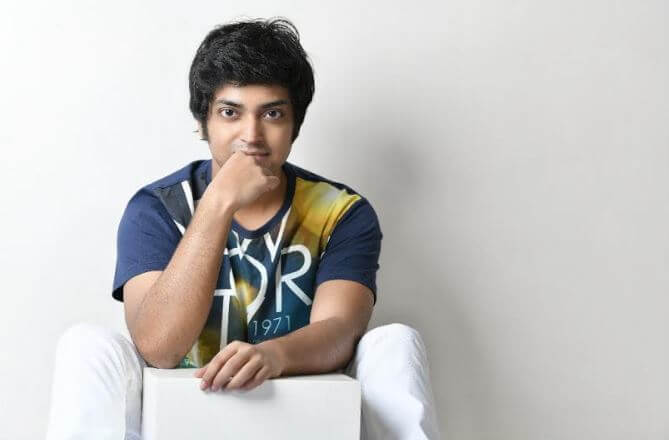 Anubhav Kanjilal is a new name in the Indian cine circle. But, as an actor, he already has started drawing attention of the audience and the film directors in West Bengal’s Tollywood. His Bangla feature film Abar Basanta Bilap has been just released. Few more of films where he has acted are on the pipeline. Recently Anubhav Kanjilal spoke to Mahboob Ar Rahman of Blitz. Here are the excerpts:

Blitz: Congratulations on the release of your recent movie – Abar Basanta Bilap. You have worked with Moon Moon Sen in this film. As you know, Ms. Sen is the heartthrob of millions of her fans in Bengal [Bangladesh and West Bengal] in particular and India in general. What was your feeling when you worked with such a huge celebrity?

Kanjilal: First of all I would like to say that Moon Di [Moon Moon Sen] is still beautiful and it was indeed an honour working with her. Even after all these years, she hasn’t lost her charm – both on screen and off screen. And being my first film, it was an immense honour working with a celebrity figure like her. Moon Moon Sen was the cherry on the top in that film.

Blitz: Would you tell us about the story, director and the team of this film?

Kanjilal: Abar Basanta bilap was a complete family entertainment, a comedy of errors of three interlinked stories. Mine was a love story and Devlina Kumar, playing my love had a blend both comedy and romance set in the north Kolkata [in India] atmosphere.

The director duo Rajesh Dutta and Ipshita Roy Sircar did a great job narrating such a story – very patiently they held my hand and made me enter the Bengali film industry.

Blitz: In the film Phobia, you have worked with Rituparna Sengupta – another big name in Bangla film industry, though Rituparna has worked in Bollywood and other cine industries in India. All of us know – she is extremely friendly and very cooperative with her co-artists. Tell us about your cine-chemistry with Rituparna.

Kanjilal: Phobia or “Amar Bhoye” is directed by Mahua Chakraborty and it is a very complex yet smart thriller. Rituparna Sengupta, as people say, is the queen of the industry and rightly so as with so much popularity, she’s one of the nicest and charming individuals in the industry. My maximum scenes were with her in the film, and she was extremely supportive. She gave me space to perform and made me so comfortable working that I ended up hugging her and thanking her! It was a fan boy moment mixed with so much gratitude.

Blitz: Rituparna Sengupta is an ever-green and extremely charming individual. You must have some excellent memories with her while working in Phobia. Would you share those with our readers?

Kanjilal: Ritu Di [Rituparna Sengupta] completely surrenders herself to the director. She follows what the narration demands. My favorite moments with her are the times we used to read the script. I always used to ask for permission before doing any improvisations and she used to always ask me to treat her like another co-actor and what I thought was right for the moment. It genuinely helped in building a sequence.

Blitz: Arjunn Dutta and his Abyakto are not a new name to the team of this newspaper. We are aware of Arjunn’s high caliber as a director and the strength of his scripts. In Abyakto, you had the opportunity of working with Adil Hussain and Prasenjeet Chakravarty’s wife Arpita Chatterjee. Adil Hussain needs no introduction as he is well known amongst the cinefanatics in South Asia and the world. How did you feel working with Adil and Arpita?

Kanjilal: Abyakto is a film that completely changed my life as an actor. It is the closest project I’ve ever been a part of. It is brilliantly written and directed project of Arjunn Dutta. And all the appreciation this film has been receiving is absolutely deserved.  Arpita Chatterjee plays the role of my mother in the film and she is absolutely magnificent and an extremely talented actor. Watch the film for her as you’ll remember her performance for a very long time. She is an intelligent and hardworking co-actor and gives her best and takes the bHuest out of me in every scene.

Adil Hussain as we all know is one of the best actors in the country today and he is unbelievably humble. He knows how to give the co actor the required cooperation so that the co-artist can give best of his/her performance. Even the other actors including Kheya Chattopadhyay, Anirban Ghosh, Debjani,  Samayantik Dyuti Mitra – who played my childhood past – all are immensely talented. It is definitely a film that is made once in a generation. Kudos to Arjunn Dutta and the brave producer Tarun Das and the entire team.

Blitz: Being born and raised in New Delhi, most possibly within the Hindi-Urdu speaking communities, how the idea of coming to Kolkata and working in Tollywood came in your mind?

Kanjilal: As my parents are Bangla, I never had a problem speaking the language. They have a very good command over Bangla, and I’ve only communicate with them in Bangla. I have always been a very proud Bangali and want to contribute to the Bangla film industry – first before stepping my foot in Bollywood.

Kanjilal: Theatre is something that I really enjoy doing. My father Anjan Kanjilal is a prominent theatre director in Delhi and most of the Bengali plays that I have performed were written by my mother Sumana Kanjilal, who is one of the most talented people I know. So yes, for me it was like joining the family heritage, a business of selling dreams. And coming to your question, theatre and films are two completely different industries and one should not confuse it as one. When I’m on stage, my mindset is completely different than when I’m on the sets shooting a film. And to be honest it didn’t really help me much as a performer or as an actor as the schooling I follow in cinema is completely different than the stage. But surely it gave a lot of confidence in me to perform even when everybody is judging you.

Blitz: Balaji Telefilms is a well known banner especially for its blockbuster films and daily soaps on television channels. It’s a huge platform, which promotes new faces. Please tell us something about your days in Balaji Telefilms.

Kanjilal: I did a part in the TV series Gumrah. They are very professional and artists are paid very well. I just love the working atmosphere of Mumbai. Would love to work with them again!

Blitz: You are just 24 and you are handsome. In personal life, how is Anubhav Kanjilal? Is he already in relations with someone?

Kanjilal: [Laughter] … I don’t know if I’m handsome or not but I am charming that I know. I’ve been in relationships before and right now I am absolutely single and concentrating on my work. I have a long career ahead of me and I’m pretty sure I will find the perfect match one day.

Blitz: Will you please tell us about your first love story?

Kanjilal: My first love story was in 9th grade. PJ, my first girlfriend, is still a good friend of mine. It was like a fairytale. I saw her first at a marathon and was completely awed by her looks. I didn’t have a cell phone back then and it took me six months to find her. Surprisingly she also noticed me, and then we ended up being with each other for a year. Then she had to go to Kota to study and it just didn’t work out. But that phase was magical. The first time I experienced LOVE.

Blitz: In your career, you are your inspirations and do you have a mentor?

Kanjilal: My mother is my biggest inspiration; whatever I am today is because of her. After that, everybody who has ever taught me anything has been a mentor. Teachers at my school – Ryan International, Delhi – who introduced me to stage, my father who has taught me the craft, Alex Mathew my boss when I was working at a corporate firm in Delhi, encouraged me to leave that life and enter the film industry, and all my directors, producers, co-artists I have worked with, all have been my mentors. I exist because of them.

Blitz: In these days lots of younger couples are opting for living together instead of getting married. How do you see that?

Kanjilal: I see live-in relationships as another term for marriage. If a person loves another person, they should be with each other and not think of a way out before committing. I would want to move in with somebody when I really want to get married. Because live-in or marriage requires mental maturity and commitment. When you’re ready – you should get settled.

Blitz: Say in a film, the script requires you a French kiss with Rituparna Sengupta. She is a senior actor. How you are going to handle that sequence?

Well, if the script demands I will definitely kiss Rituparna Sengupta and if she agrees to kiss me of course. For me, in that moment I will see her as the character and I will have to forget the reality. I don’t have any reservations as an actor whatsoever.

Blitz: There was a golden era of Bangla cinema, which unfortunately is getting dried slowly. Do you see any hope of the revival of the good days of the Bangla cinema especially in a time when Hindi movies are grabbing almost majority stakes in the market?

Kanjilal: The Bangla film industry has never dried up, it is just catering to the demands of the audience. And when a good film maker’s visionary project gets reflected by the audience, he loses hope, and makes a film only to satisfy the audience. But having said that there are still veterinary directors like Srijit Mukherjee, Kamaleshwar Mukhopadhaye, Goutam Ghosh, Kaushik Ganguli, Arindam Sil and others who are making extraordinary films in the Bangla Film Industry.

There should be more and more audience going to the theatre to watch movies. Because, revenue is essential for any industry.

Blitz: If you are asked to assess film director Arjunn Dutta in a few words, what will you say?

Kanjilal: Arjunn Dutta is an extraordinary talent. He has a very good and unique style of storytelling in a very simple yet complex way. And whatever film project he undertakes in future, I believ those will be amazing. I really hope we work again in his future movies.

Blitz: Tell us about Kolkata. Have you fallen in love with this vibrant city?

Kanjilal: Kolkata has a different charm and magic. And I’ve started falling in love with Kolkata. I stay here alone, so I miss my Delhi but still I would say Kolkata is beautiful. And as you said, it is so vibrant that it’s difficult not falling in the love with it. But my city will always be my home city. That will never change.

Blitz: If any of the Bangladeshi film production companies will ask you to work here, will you accept?

Kanjilal: I would love to work with the Bangladeshi film production companies. Bangladesh is making excellent films and it would be my honour to perform there. I’ve been to Dhaka couple of times for theatre and I was blown by their hospitality. For me all these things matter a lot, way more than money, I would do it for that perfect script and project. As an actor I would love to contribute as much as I can.