Bangladeshi film actress Bipasha Kabir, who came into limelight by appearing in item song in a number of movies has secretly married an American expatriate. However, the actress has not yet made announcement of it. This correspondent tried to reach Bipasha through her mobile phone number. But the actress did not attend the calls.

According to information, Bipasha Kabir’s husband Shamim Khan hails from Sylhet district in Bangladesh. This is his second marriage. Khan has two sons and a daughter from his first wife.

It is further learnt that, eldest son of Shamim Khan, aged 17 is being educated in madrassa in New York City.

It is learnt that Bipasha Kabir secretly married Shamim Khan during the last week of September or the first week of October in 2021. Earlier, Shamim Khan came to Dhaka from the United States. Soon after the marriage, Bipasha and her husband went to the island nation of Maldives for honeymoon. Later, Bipasha’s verified Facebook profile was flooded with pictures of the honeymoon. In one of the photos Bipasha is seen in extreme romantic mood enjoying candle-light dinner in the sea beach. 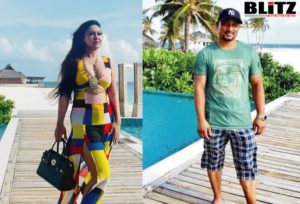 This correspondent has received some photographs of Shamim Khan, which are believed to be taken in Maldives, the same location, where Bipasha Kabir has also taken photos of her. Earlier, Bipasha told a section of entertainment reporters that the news about her secret marriage was false. When she was shown photographs of Shamim Khan in Maldives, Bipasha turned furious and expressed anger at the reporters for meddling into her private affairs. But this time, the hot girl of Bangladesh film industry has not made any comments about her secret marriage. Even she has reportedly signaled of marrying Shamim Khan.

It is also learnt that, following her marriage, Bipasha Kabir attended a party hosted by some corporate officials. In that party, she announced of permanently migrating to the United Kingdom. Local entertainment reporters are seeing this event as her farewell party. A source told this correspondent that Shamim Khan is making arrangements for Bipasha’s leaving Bangladesh for Britain, wherefrom she will be later taken to the United States. Reason behind such arrangement is, Shamim Khan is careful of letting his current wife know about his secret marriage with Bipasha Kabir, as she (the current wife) may take legal actions against Khan for marrying without her written consent. Moreover, according to the immigration laws of the United States, Shamim Khan would face legal problems from the US immigration authorities once he makes efforts of bringing Bipasha Kabir into the US by declaring her as another wife.

While Bipasha Kabir is neither denying nor admitting her secret marriage with Shamim Khan, the actress already has added “Khan” in her name. She also has changed the name on her Facebook and social media accounts from Bipasha Kabir to Bipasha Kabir Khan.

According to a credible source, Bipasha Kabir has already changed her name in the passport and other documents.