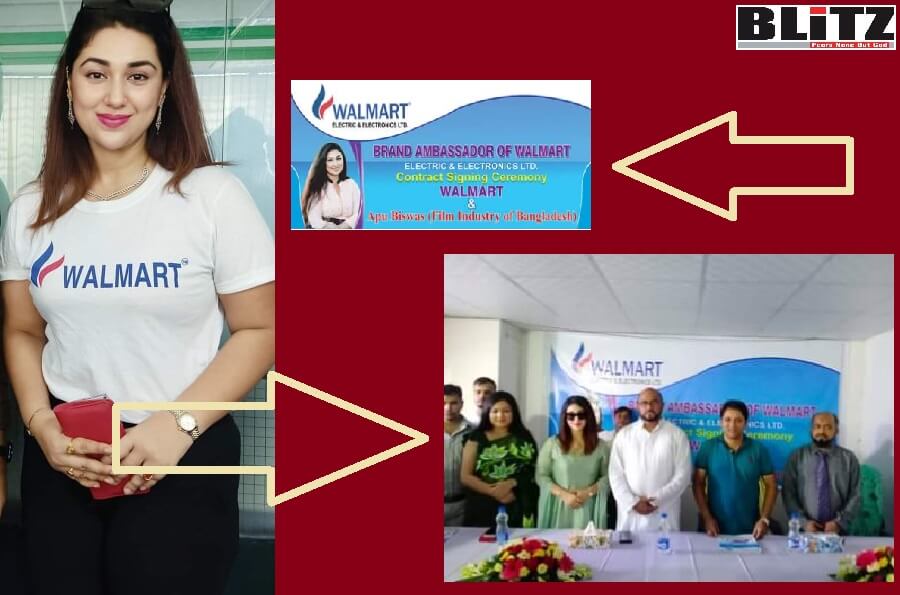 Apu Biswas, is a film actress model and the former wife of Shakib Khan, superstar of Bangla film industry. She made her debut in the film industry with the film Kal Shokale in 2006. Apu then performed in Koti Takar Kabin.

Chachchu, Dadima, Pitar Ashon, Kabinnama, Tomar Jonyo Mortey Pari, Swamir Songshar and many other Bangla movies in lead character. Most of her films with Shakib Khan had achieved grand success in the box office. But now, Apu Biswas has drawn the attention of Bangladesh media by announcing her appointment as the “brand ambassador” of ‘Walmart’. Although most of the people in Bangladesh considered this Bangladeshi company as the world famous American company, according to the website of the company it’s office is located at 389/B, DIT Road, MG Tower, (4th Floor), West Rampura, Dhaka 1219, Bangladesh. The only name appears in the ‘Chairman & Directors’ page of the company is an individual named Sheikh Farid Ahmed.

“Our products are the best in quality and meaning. The electrical and electronics products we supply have become popular day by day. For those who like a touch of modernity, our products are very popular. The price of our product is lower than other reputed companies but it is like comparing quality, quantity and value. Once purchased, it can completely warranty free for 12 years”.

In the ‘Employees’ page of the company, it mentions names of seven individuals holding various positions.

Although on its Facebook page, the company claims itself as ‘Walmart’, on the website the name is mentioned as ‘WalmartBD20’, thus generating confusion into the minds of the people. Another name appears on the Facebook page is Walmart Electric & Electronics Ltd.

A post on the Facebook page of the company displays photograph of Apu Biswas along with few more individuals. In the caption of the photo, it is written: “Alhamdulillah. Brand Ambassador signing ceremony with actress Apu Biswas (Film industry of Bangladesh)”.

When contacted, authorities in Walmart USA said, they don’t have any branch or office in Bangladesh to sell electrical and electronic items. It further said, Walmart is a global trademark property of Walmart Inc.

It may be mentioned here that, Walmart Inc., is an American multinational retail corporation that operates a chain of hypermarkets (also called supercenters), discount department stores, and grocery stores from the United States, headquartered in Bentonville, Arkansas.

The company was founded by Sam Walton in nearby Rogers, Arkansas in 1962 and incorporated under Delaware General Corporation Law on October 31, 1969. It also owns and operates Sam’s Club retail warehouses. As of July 31, 2021, Walmart has 10,524 stores and clubs in 24 countries, operating under 48 different names. The company operates under the name Walmart in the United States and Canada, as Walmart de México y Centroamérica in Mexico and Central America, and as Flipkart Wholesale in India. It has wholly owned operations in Chile, Canada, and South Africa. Since August 2018, Walmart holds only a minority stake in Walmart Brasil, which was renamed Grupo Big in August 2019, with 20 percent of the company’s shares, and private equity firm Advent International holding 80 percent ownership of the company.

Walmart is the world’s largest company by revenue, with US$548.743 billion, according to the Fortune Global 500 list in 2020. It is also the largest private employer in the world with 2.2 million employees. It is a publicly traded family-owned business, as the company is controlled by the Walton family. Sam Walton’s heirs own over 50 percent of Walmart through both their holding company Walton Enterprises and their individual holdings. Walmart was the largest United States grocery retailer in 2019, and 65 percent of Walmart’s US$510.329 billion sales came from U.S. operations.

Walmart was listed on the New York Stock Exchange in 1972. By 1988, it was the most profitable retailer in the U.S., and it had become the largest in terms of revenue by October 1989. The company was originally geographically limited to the South and lower Midwest, but it had stores from coast to coast by the early 1990s. Sam’s Club opened in New Jersey in November 1989, and the first California outlet opened in Lancaster, in July 1990. A Walmart in York, Pennsylvania, opened in October 1990, the first main store in the Northeast.

Walmart’s investments outside the U.S. have seen mixed results. Its operations and subsidiaries in Canada, the United Kingdom, Central America, South America, and China are successful, but its ventures failed in Germany, Japan and South Korea.