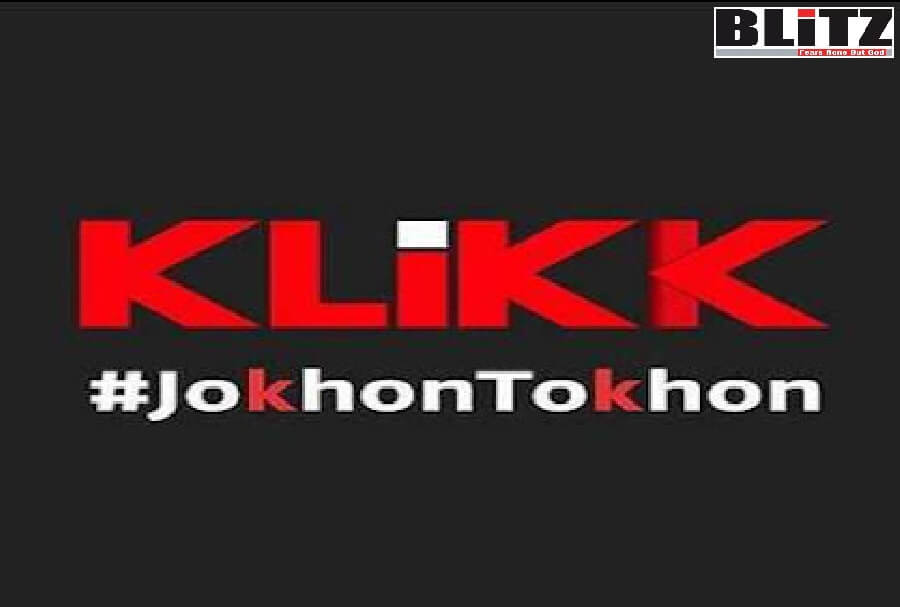 Kolkata-based OTT platform Klikk, which solely features various types of Bangla contents such as original web-series, animated features, web-films etcetera began its journey in November 2020. This platform is owned by Angel Television Pvt Ltd, a decade-old entertainment company enjoying high repute in the industry. Despite the fact that Bangladesh is one of the prime markets for Bangla content-based OTT platforms, Klikk is yet to reach the viewers in Bangladesh as it does not have any representatives in Dhaka or any facilities for the prospective subscribers from Bangladesh to buy subscription of Klikk in a convenient way as that of HoiChoi. It may be mentioned here that, HoiChoi is gradually becoming popular within millions of people in Bangladesh while its size of subscription is on steady growth. HoiChoi has started buying web-films and web-series from Bangladeshi makers.

Klikk is a sister concern of Angel Television Pvt Ltd. According to website of the company, over 3 glorious decades of customer satisfaction and trust,  it all began when Angel Video (Sister Concern) a proprietorship concern run by Sajan Kumar Tantiya diversified into the acquisition of video rights in the year 1986-87, Angel steadily amassed a treasure trove of popular Bengali movies and film based videos.

Meanwhile, Angel distribution network spread across the country including metros, mini-metros, large and small town – where we have our own distributors and sub–distributors.

From VHS then, to VCDs and DVDs today, entertainment media has kept refining and redefining itself to suit modern market demands. And so has Angel. Armed with a veritable archive of Bengali films, Angel penetrated into the Cable and Satellite TV, Terrestrial TV scene, offering films for exhibition on various networks. Angel has thus carved a niche for itself today, not only in the home video segment but also entertainment at large.

In addition to OTT platform, Klikk also has its own YouTube channels.

Commenting on business prospect for Klikk in Bangladesh, Tajul Islam, Deputy CEO of Crown Entertainment, largest production company and content providers in Bangladesh said: “Bangladesh is certainly a huge market for any OTT platform, particularly those with exclusively Bangla contents. With 180 million population, the number of internet users in this country is over 40 million. This is a huge number. Because of this massive market, Indian OTT platforms HoiChoi and Zee5 have already made its presence in here through appointing vendor or opening their own office. There also are offices of other international OTT platforms such as Netflix”.

Tajul Islam said, “There are many factors for OTT platforms to be interested in Bangladesh. First of all is the huge size of population and availability of internet access. Second reason is, Bangladesh already has emerged into the fastest growing economy in the world with per capita income increasing steadily along side people’s buying capacities. For these factors, OTT platforms such as Klikk should actually consider entering the Bangladesh market soon. They should buy contents from Bangladesh, in order to attract prospective local subscribers. At the same time, it is important to note, Bangla-speaking population in India are particularly fan of dramas, web-series and web-films from Bangladesh, because, Indian Bangla-speaking people say, stories of Bangladeshi dramas and other contents are much stronger in comparing to those in West Bengal”.

Replying to a question – why a leading production company and content provider like Crown Entertainment is not directly contacting OTT platforms such as Klikk, Tajul Islam said, “Everyone in Bangladesh know, we are the largest production company in the country. We have vast experience, while our company has its own technical units such as cameras, editing panels and dubbing studios. We shall be glad to cooperate with companies such as Klikk”.