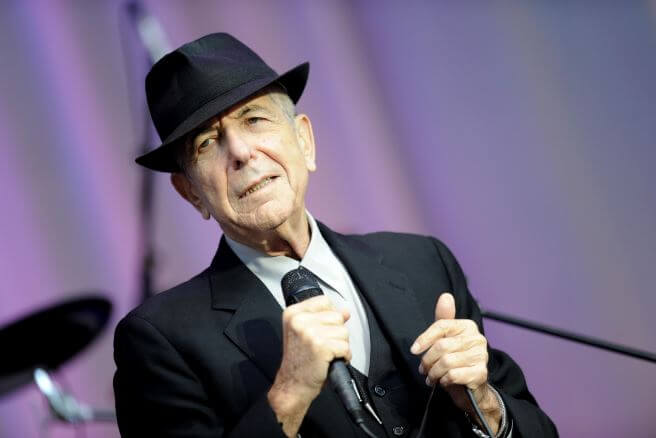 Valerie Sobel
Concentration camps. Death is looming. Separation of lovers. Naked bodies in queue for showers of poison. Only way out of the despair on this march to imminent death is to surrender to the thoughts of a loved one.

…not exactly the imagery I concocted in my head when I listened for the last 30+ years to the prolific love hymn by Leonard Cohen. But, boy oh boy, was I wrong…!

Known to the cultivated as one of the most relevant and evoking poets of the last 100 years, Jewish Canadian Leonard Cohen wooed us with the enormity and depth of his words, not only in his poetry, but in his music. Yet how little we actually knew and appreciated his gift while this giant was still alive. Most of us, Cohen fans and followers, thought we “got” him. Thought we got his most poignant Jewishness. Thought we got his reverence for humanity and cries of human struggles. Thought we got his religious symbolism and temperamental metaphorism. Yet, how, in the name of everything sacred, did I miss this?

As if hit by a tsunami this morning, I woke up to the meaning behind the lyrics in his epic song “Dance Me to the End of Love”. The very song we all decided to immortalize from the moment we heard the first few compelling bars of the profoundly Jewish violin. I didn’t tie the knots until today;  guilty of intellectual laziness, as charged.

What did Leonard mean when he said “Dance me to the end of love?”

When he said, “Dance me to your beauty with a burning violin” (emphasis on “burning” in reference to a very Jewish instrument)

When he said, “Dance me through the panic ’til I’m gathered safely in” (…I have shivers!)

When he said, “Lift me like an olive branch and be my homeward dove”

When he said “Oh let me see your beauty when the witnesses are gone, Let me feel you moving like they do in Babylon”

When he said, “Dance me to the children who are asking to be born” (…more shivers)

When he said, “Dance me through the curtains that our kisses have outworn” (“curtains”! only Cohen could so profoundly characterize wire fences and physical separation as “curtains”)

When he said, “Raise a tent of shelter now, though every thread is torn, Dance me to the end of love”

…how clear it all is now.

In the words of the transcendent genius, himself:

“Dance Me To The End Of Love … it’s curious how songs begin because the origin of the song, every song, has a kind of grain or seed that somebody hands you, or the world hands you, and that’s why the process is so mysterious about writing a song.  But that came from just hearing or reading or knowing that in the death camps, beside the crematoria, in certain of the death camps, a string quartet was pressed into performance while this horror was going on; those were the people whose fate was this horror also. And they would be playing classical music while their fellow prisoners were being killed and burnt. So, that music, ‘Dance me to your beauty with a burning violin,’ meaning the beauty there of being the consummation of life, the end of this existence and of the passionate element in that consummation.”

Sad that most of us were unable to parse through the meaning of what was meant when the giant was alive; no doubt we would have listened to this epic song in a very different way.

With his eloquence and grace, Leonard Cohen offers us the following defence and absolution from our ignorance:

“But, it is the same language that we use for surrender to the beloved, so that the song — it’s not important that anybody knows the genesis of it, because if the language comes from that passionate resource, it will be able to embrace all passionate activity.”

Maestro Leonard Cohen, master of words, grand master of poetic artistry, author of countless poems, an unforgettable smoky baritone, composer, a rare creed of intellect – charged up to $500 per concert ticket before his death. What I wouldn’t do to pay $5,000 now to hear him belt out “Dance Me to the End of Love” with a “Thousand Kisses Deep” as an encore.

Valerie Sobel is a Special Contributor of Blitz.