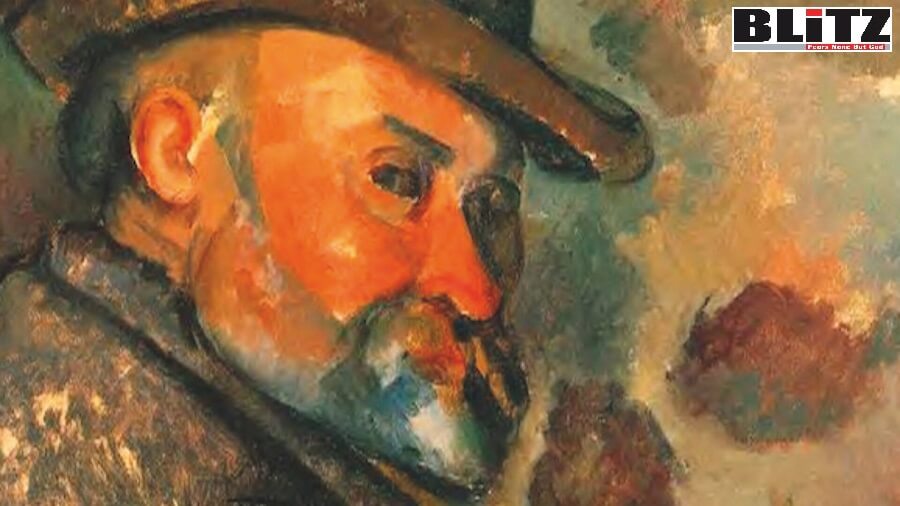 We may appreciate this also in the context of Paul Cézanne’s preoccupation with time and death. Paul Cézanne would return many times to the image of the human skull – the classic memento mori. Writes Sam Ben-Meir

New York’s Museum of Modern Art is currently presenting an exhibition devoted to an in-depth review of Paul Cézanne’s drawings. If there is any criticism to be made of this extraordinary show, it is that it is frankly overwhelming: with roughly 280 pencil, ink and gouache drawings and watercolors (and even a handful of oil paintings), there is so much to take in that two or three visits to the exhibition may be required to do it justice.

Given the exhibition’s scale, all we can endeavor to do here is mention a handful of its highlights and curiosities. Consider, for example, Studies of a Rower (1867-69), sketched in Cézanne’s late twenties. Three images of a solitary oarsman move steadily across the page with the central figure being the most complete. Which is to say that we may take the series to be three distinct studies of a rower, or – what is perhaps more interesting to consider – we may take the series as a whole, almost as if we are watching the still frames of a film. The young artist in that case may be striving to convey something significant about our experience of motion and time and how they are interrelated.  Already with this ostensibly simple page we seem to be observing the gestation of a modern sensibility – which is to say, the seeing of the artist is not the interrogation of an in-itself world, but a vision which occurs in him, and is configured by him: “Drawing is only a configuration of what you see,” as Cézanne would state.

The fundamental insight of modern epistemic thought is that we can never ignore the constitutive role of the knower, or in this case the artist. We may appreciate this also in the context of Cézanne’s preoccupation with time and death. Cézanne would return many times to the image of the human skull – the classic memento mori. “There is no line” Cézanne is to have said. In the Study of a Skull (1902-04), for example, we find several outlines being offered, such that the boundary between the skull and its background is hardly definitive. What Cézanne recognized was that the contour of an object is never given to us as a simple line delineating the shape of the thing but is rather the “ideal limit towards which the sides of the [object] recede in depth,” as the philosopher Merleau-Ponty observes. This is why we find Cézanne consistently presenting multiple curves when tracing the shape of an object, be it a skull, an apple or the human figure.

If we are going to be true to the visible world then we cannot be satisfied with a “bloodless contour” encircling the object before us. As his friend Joachim Gasquet recalled, Cézanne observed that “objects never cease to be alive.” Nature is alive everywhere – “she is nowhere dead nor silent,” as Goethe would state in the preface to his Theory of Colours (1840). Objects “oscillate within [their] prescribed limits” – just as we find in Cézanne’s Still Life with Green Melon (1902-06): the melon’s circumference appears almost to be vibrating with multiple, broken, anxious and restless lines. The world and everything in it is alive; and nothing that is living is completely still or utterly without motion – everywhere we look the world is charged with movement, vitality and dynamism.

Cézanne was obsessed with the fidelity to truth – being true to the object, which is also to say being true to the sensations which the artist experiences in his encounter with the object: “Sensation is the basis of everything, for a painter,” Cézanne would say. Being true was decidedly not about being faithful to some self-sufficient world existing independently and in-itself. “The landscape thinks itself in me.” Cézanne is suggesting that the painter is in a sense performing a vital ontological function with respect to the object. The painter allows the object to realize its inner essence in and through the coming-to-itself of the visible which the painter carefully, painstakingly traces.

There was also a darker side to Cézanne’s work, which the exhibition thankfully does not overlook. Especially in his early years we find a certain preoccupation with violence, murder and brutality. What was Cézanne’s attraction to scenes of grizzly violence? Why does he return again and again to depictions of murder and rape? To be sure, terrible physical violence is a theme running through much of Western art, although we certainly cannot suppose that artists were drawn to these subjects for all the same reasons. For Francisco Goya – who was immensely popular with Cézanne and his contemporaries (the exhibition in fact includes a small but immediately recognizable sketch of Goya’s self-portrait) – depictions of violence often functioned as an indictment, a judgment on the harsh reality of war, the reality of evil and the inhumanity of man.

Cézanne’s examination of violence is found in this exhibition among a number of small but extraordinarily intense pieces. The Murder (1874-75) is a watercolor depicting the moment just before an assailant is about to plunge his knife into a hapless victim. The brightness and serenity of the very real landscape (located in southern France) presents a sharp contrast to the grizzly scene in the lower forefront.

Another notable watercolor is The Abduction (1867), combining themes of violence and eroticism, and most likely representing the abduction of Proserpine by Pluto (as told in Ovid’s Metamorphoses), a scene that Cézanne would execute in a much-discussed oil painting that same year. There is a notable messiness to the brushwork of the watercolor, absent in the comparatively polished technique of the oil painting, which is arguably more appropriate to the impulsiveness of the action we witness. Whatever else was driving Cézanne to create these intense depictions of brutality and violence, one way we may begin to understand them is as a critical assessment of the modernist notion of progress based in a frank investigation of our primal nature and the instinctual urges by which it is characterized.

Cézanne used watercolor throughout most of his career – and the medium was for him anything but a minor genre. As with virtually all his materials, Cézanne would prove to be radically innovative when it came to watercolor as well. In his earlier work, Cézanne would apply watercolor more thickly and generally cover the paper completely. But over time his method evolved: his watercolors were thinned to the point of transparency and applied almost like delicate veils or screens of color. No less significant was Cézanne’s readiness to leave parts of the paper blank; and to apply graphite markings between, under and over the various layers of paint. These were features which would eventually come to characterize his mature paintings as well – including the use of bare canvas, as well as a more translucent palette.

One of the exhibition’s many notable watercolors is Cézanne’s Three Pears (1888-90), which was also displayed at his first solo exhibition in 1895. It is a fascinating composition and given the arrangement of the pears – especially the two in the foreground – also perhaps a somewhat erotic one. The fruits rest on a white dish surrounded by a freely painted arabesque of black and grey. This rather wild background motif seems to turn, twist and writhe almost as though it were animate. We may be hardly surprised to learn that both Edgar Degas and Pierre-Auguste Renoir each wanted this work for themselves, and ultimately had to draw lots to determine which of them could have it (Degas won).

The exhibition also includes a significant sampling of Cézanne’s landscapes executed en plein air – his exploration and study of “the diversity of the scene offered by nature” as he put it. These are works that would be accomplished through a slow, deliberative process based in the rigorous and attentive observation of the natural world. “Nature is on the inside,” Cézanne would state – so that the real question becomes, how does the natural world make itself seen by the painter? Forest Path (1904-06), a watercolor and graphite on cream wove paper, is characteristic of Cézanne’s late work, using methods which his friend and fellow artist Émile Bernard would describe as “singular… and excessively complicated.” In the upper half we find a kind of arched canopy, achieved in part by a long, penciled branch stretching from right to center; while on the left are diamond-shaped, prismatic patches of color which together serve to form a scene at once delicate, and sure, luminously aglow, yet maintaining the density of the foliage and mossy forest floor.

There is much more to this exhibition than I have touched on here: the self-portraiture, the numerous sketches of his wife and son, the oil paintings, and the list goes on. Cézanne was clearly interested in capturing the world in all its plenitude and diversity. The singular achievement of this exhibition is that it allows us to enter into Cézanne’s process of giving shape and substance to not simply what he sees, but how he sees. Cézanne is in many ways the quintessential modern artist, “the father of us all,” as Picasso would remark. And we can see from this remarkable exhibition why this is so – if to be modern is ultimately to recognize that the mind is always active, always organizing our sensations, and our experience; forming a world that without our constitutive activity would remain a mass of confusion and chaos. In a sense the artist is doing what we all are doing all the time – how could it be otherwise? But unlike the rest of humanity, the artist is giving substance and solidity to that process whereby we (re)configure the world, by tracing – with loving patience and laser-like focus – the world’s very coming-to-appearance in and through every movement of the pencil or brush.