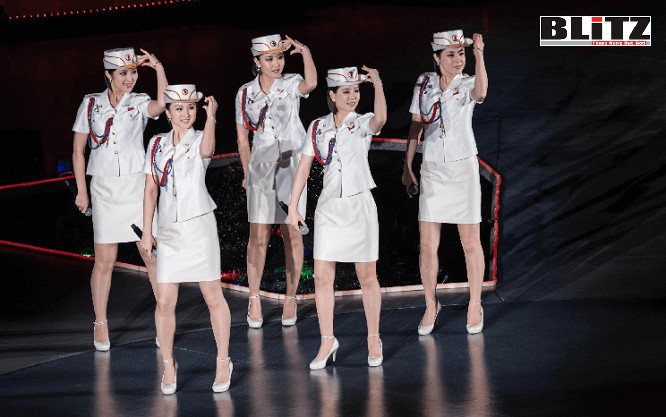 The book Fundamentals of Korean National Dances is a priceless cultural heritage of the Korean nation.

It is an aggregation of national dances which comprehensively crystallizes dance movements strong in national sentiment and characteristics among various kinds of dances such as folk, court and religious dances created and developed by the Korean people generation after generation and other dances created in reflection of their demands and aspiration in recent years.

The graceful movements of the book began to form in the periods of ancient states in Korea.

In every October after finishing their farming, the people of Ancient Joson enjoyed themselves dancing and singing over varieties of dishes, full of delight at a good crop that year and with a hope for another bumper harvest in the following year. Dancing was the main part of the celebration.

The people of Koguryo, the first feudal state of Korea, also created and developed dance movements reflecting their feelings and emotions.

The mural paintings in the period of Koguryo showcase the dance movements developed in those years.

According to the dance movements in the book, they are divided into those for the upper parts of the body (waving and hand movements), those for the lower parts of the body (walking, raising and stamping feet, rotating and jumping movements), and other movements with such hand props as fans, masks, kerchiefs, swords and janggu (hourglass drum) which have been widely used by the Korean people.

The Korean dances, with more soft movements rather than immoderate ones, are powerful and graceful.

In modern times, the national dances disappeared due to the Japanese imperialists who occupied Korea by force of arms and pursued a policy of obliterating its culture. After Korea’s liberation in August 1945, the Korean people could restore their national dances and compile the book Fundamentals of Korean National Dances which systematizes all the dance movements in detail.

Today, the Korean dances which combine classic beauty with modern one are staged at national art performances and popularized among the people. All the Koreans of all ages and both sexes like to enjoy dancing anywhere on holidays and days off.

The book serves as a solid foundation for further enriching the art of dance in conformity with the emotions and aesthetic tastes of the people.

It is a national intangible cultural heritage.