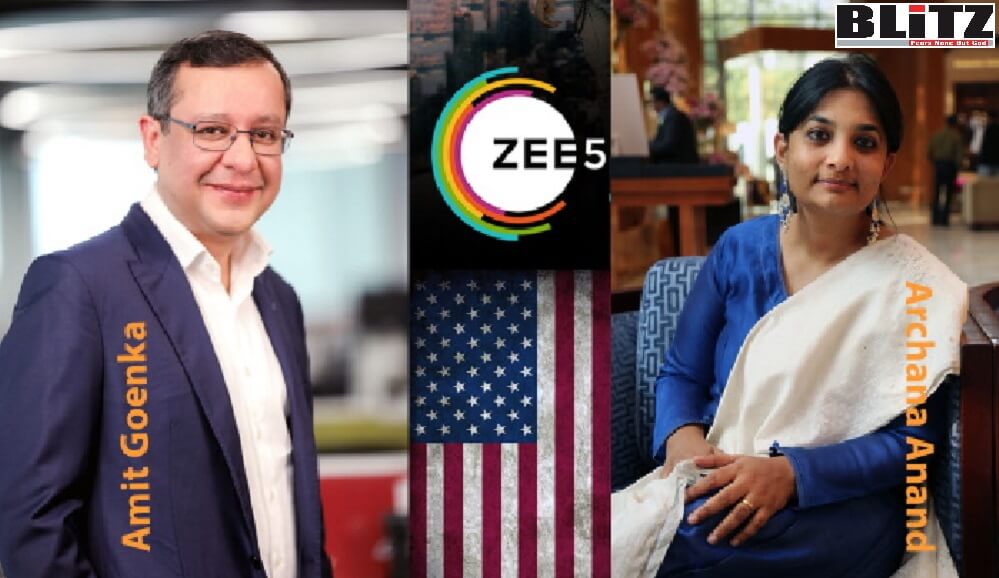 Indian OTT (Over The Top) platform Zee5 has recently launched its activities in the US, while the company sees it as a very significant moment. It added that bringing the on-demand service to the US was “so much” more than just providing the South Asian diaspora in the country with an entertainment platform through which they can access a library of stories. Instead, it regards the launch as a cultural bridge, providing a real-time connect between users and their families as they get to watch the same content across continents.

“We’ve had a long association of over two decades with this market, bringing our viewers here the best of Indian entertainment through our channels,” said Amit Goenka, president, digital businesses and platforms, ZEE Entertainment.

“With ZEE5, we now look to offer both these audiences and the younger demographic access to a much wider choice of premium content with our Originals, digital premieres and more, on any screen of their choice and with a completely personalized viewing experience.”

Zee5 unveiled at a mega event with Priyanka Chopra Jonas as a special guest; ZEE5 subscribers can stream the largest selection of Originals and Movies across Indian languages, including upcoming Blockbuster film RRR, and Library Titles from Zee Network channels along with Pakistani and Bangladeshi shows; Existing library of 130,000 hours of content; Announced 50+ Theatrical releases and 40+ Originals this year.

ZEE5’s launch announcement was made by Archana Anand, Chief Business Officer, ZEE5 Global, at a mega event attended by media and consumers from the U.S. and across the globe. She was joined by a special guest for the event, Actor, Producer, Activist and Entrepreneur Priyanka Chopra Jonas.

Priyanka Chopra Jonas also joined Archana in unveiling ZEE5’s upcoming content slate and its new global brand campaign “Welcome to South Asia: Stories from our world.” The campaign spotlights stories from South Asia, where even ordinary stories are extraordinary, therefore leading to the narrative “if this is our reality, imagine our stories.”

The multiple announcements were interspersed with conversations between Archana Anand and Priyanka Chopra Jonas with the latter commenting on how streaming services have changed the landscape of content viewing, and on the hunger among South Asian communities to watch their own hyperlocal content and see themselves being represented to international audiences, and how streaming services were key in providing such a platform to help people feel represented.

Congratulating ZEE5, Priyanka Chopra Jonas said, “Wishing all the best to my friends at ZEE5 on their new launch. I have really enjoyed celebrating and spotlighting all the incredible talent from South Asia today. I look forward to watching these storytellers entertain new audiences around the world and will be cheering them on from the side lines.”

Archana Anand, Chief Business Officer, ZEE5 Global, added, “Bringing ZEE5 into the U.S. is so much more than just providing the South Asian diaspora here with a mega entertainment platform through which they can access a vast library of stories. It is a powerful bridge between them, their culture, and their languages. It is also a real-time connect between them and their families as they get to watch the same content across the ocean. And it is a platform through which their stories get showcased on an international stage. With this and the rich library of shows we have, I am confident that we will become the preferred destination for South Asian content and woo both TV and Streaming loyalists across all age groups across both South Asian and mainstream audiences in the shortest possible time.”

Commenting on the launch of Zee5 services in the US, Bob Giddings, Head of Business Corporate Affairs of Trishul, a company which is planning to simultaneously launch 3 digital platforms in December said, “This is truly a great initiative. There are hundreds of millions of Hindi-speaking or Hindi-understanding populations in the world. Even in countries like Russia, where Hindu is not a language of the masses, Hindu films and dramas have been extremely popular for decades. In Russia, majority of the people know, for example, the names of Dev Anand, Amitabh Bachchan, Sri Devi, Rekha, Dilip Kumar and today’s Salman Khan and others. These have become almost household names in Russia and many other countries in the world. Indian cinemas, dramas and daily soaps have massive prospects. But unfortunately, despite the fact of almost 230 million Bangla-speaking population in the world, we, neither Bangladesh not West Bengal have succeeded in spreading the reach of Bangla contents – movies, dramas and TV serials amongst major segment of the prospective viewers.

Bob Giddings said, Bangla film and drama sector would witness tremendous positive result once it can launch digital platforms with the capabilities of covering every prospective viewer in the world. This would also significantly enhance the flow of revenue from these sectors.

Describing the target of Trishul, Giddings said, “We are targeting the Bengali population as well as those Bangla-understanding people around the world. By strongly upholding the spirits, social and family values of Bengalis, our contents will have advantage over others, in quality in particular.