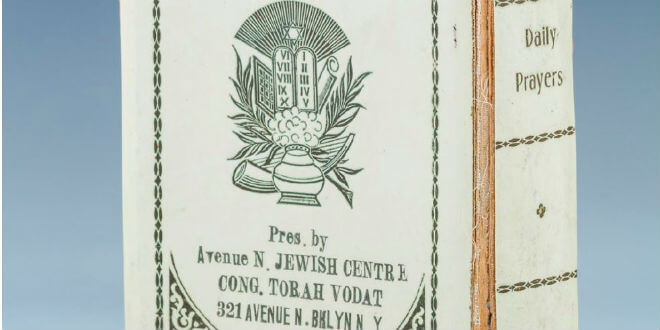 The Hebrew-English prayer book that once belonged to Marilyn Monroe is going up for auction. Worn and tattered, the small book can attest to the sincerity of her conversion while bearing witness to the spiritual journey of the troubled soul behind the iconic blond bombshell who appeared on the big screen.

On November 12, Marilyn Monroe’s cream-colored siddur (prayer book) will go up for auction. A non-celebrity edition of the Hebrew-English prayer book published in 1922 would only be worth around $100, but this siddur will have a starting bid $4,600. The auction house, J. Greenstein & Co. in Cedarhurst, Long Island, expects the book to fetch between $7,000-$12,000.

Born Norma Jeane Mortenson on June 1, 1926, Monroe led a tragic and short life, struggling with substance abuse and depression, passing away on August 5, 1962 at the age of 36 from an overdose of barbiturates. Considered a sex-symbol to this day, Monroe worked at her craft and won several awards for acting.

The identity of her father is unknown and she spent most of her childhood in foster homes and an orphanage, suffering from sexual abuse and stuttering. She married at the age of sixteen and divorced four years later. She began modeling at the age of 18 and two years later, signed a contract with 20th Century-Fox to act in films. She married retired baseball star Joe DiMaggio in 1952, divorcing him only nine months later.

After her divorce, Monroe began a relationship with playwright Arthur Miller. Miller, who had already married and divorced two Catholics, self-identified as an atheist and was a harsh critic of Israel. He claimed not to have influenced Monroe in her decision to convert though he supported her decision. Her conversion was overseen by Rabbi Robert Goldburg of Congregation Mishkan Israel in New Haven, Connecticut, who was ordained as a Reform rabbi. Monroe told the rabbi that she was motivated to convert because of the many wonderful Jews she had met.

“She indicated that she was impressed by the rationalism of Judaism — its ethical and prophetic ideals and its concept of close family life,” Rabbi Golburg later wrote.

Monroe’s films were banned in Egypt as a result of her conversion. The process did not include immersion in a mikveh (ritual bath) and, therefore, would not be considered valid by Orthodox Jews.

She married playwright Arthur Miller in 1956 in a civil ceremony after converting to Judaism. Two days after the civil ceremony, they had a Jewish ceremony at MIller’s home. Rabbi Goldburg officiated at her traditional Jewish wedding to Miller which was followed by a meal of cold lobster.

The couple divorced five years later, the year before Monroe’s death. Rabbi Goldburg said that after her divorce from Miller, Monroe told him that she was still committed to being Jewish.

She attended events supporting Israel, continued to attend Passover Seders, had a mezuzah on her door, and proudly displayed a large Hanukkah menorah in her home. In addition, it appears that  Monroe put the siddur to use since it contains hand-written notes and the spine is worn.

The siddur is being sold on behalf of its current owner, an American living in Israel who bought it from Monroe’s estate in 1999, The Jewish Chronicle reported. The prayer book was previously put up for auction in 2017 and went unsold.