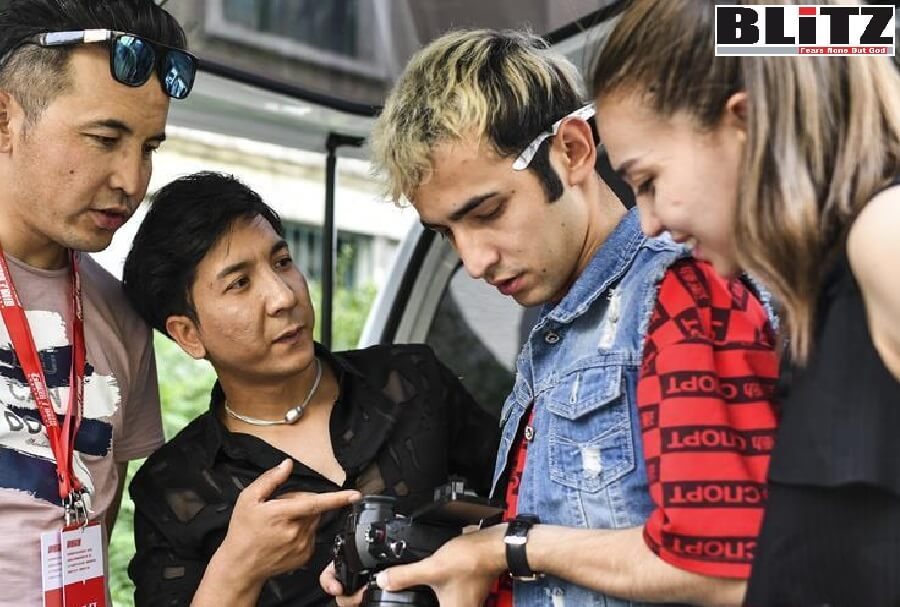 Anar Pishti, which means “ripe pomegranate” in the Uygur language, started airing online in 2016. In Xinjiang, pomegranates symbolize the unity between different ethnic groups; they embrace each other tightly, just like pomegranate seeds. Writes Li Qian in Urumqi

One of the most popular online short-video series from Northwest China’s Xinjiang Uygur Autonomous Region, Anar Pishti, has been running for seven seasons now. Its success is putting Daodao after the character he plays on the show, on the path of realizing his dream of reaching the big screen like his idol Jackie Chan.

Anar Pishti, which means “ripe pomegranate” in the Uygur language, started airing online in 2016. In Xinjiang, pomegranates symbolize the unity between different ethnic groups; they embrace each other tightly, just like pomegranate seeds. The video series focuses on the lives of Daodao and his diverse group of close friends and coworkers, who include people from the Han, Uygur and Kazak ethnic groups.

Leading with laughter
As the show’s lead and “soul” of the series, Daodao, who can be seen in ads posted everywhere in Urumqi, has more than 8.7 million followers on Douyin, the Chinese version of TikTok, and many more on other social media platforms like China’s Twitter-like Sina Weibo. The short episodes of Anar Pishti have earned more than 100 million views on Douyin alone.

In their videos, Daodao and his friends, including the white-haired Maomao Bai and the beautiful lady Anarhan, act out funny stories, each about half a minute or so in length. They act out numerous hilarious scenes such as making fun of the iPhone’s design or act snobbish during a blind date. Most of the videos garner hundreds of thousands of likes, and even more than one million.

Watching these scenes play out, you would probably never guess that Daodao used to be a phone operator before he began shooting these videos. He started shooting funny videos with Maomao Bai and Anarhan only out of interest, and finally persuaded their company to produce the videos in series when they were able to show how popular it had become.

In the beginning, the video series was produced in the Uygur language.

“Thanks to our fans in Xinjiang, as many of them shared our videos with their friends in other provinces and regions when they go elsewhere in China, and we started to have more and more followers outside of Xinjiang,” Daodao said.

So the team decided to produce the series in Putonghua (Standard Chinese) starting from the fifth season and achieved a huge success. Now both the video series’ account and Daodao’s personal account have more than 8 million followers on Douyin – 16 percent of the followers are from Xinjiang and the rest from other parts of China and elsewhere.

Their videos take inspiration from daily life and feature situations that everyone, from 4 to 80 years old, can relate to, Bai said.

One major reason for the popularity of the videos is that they are not only funny but also uplifting, Daodao told the Global Times, and the trio is proud that they are a team with “positive energy.” Since 2017, the team started to introduce educational content in their videos such as introducing Xinjiang’s tourist sites, local delicacies and the national poverty alleviation campaign.

“Although our video series is a comedy, we believe we also have positive energy to influence our audience. In the beginning we shot a mini-drama on the fight against drugs, and that was the start for us to incorporate social welfare content in a fun way, which developed into our unique characteristic,” Daodao said.

The traffic police series promoting road safety has been particularly successful and well-received by the viewers as it is both funny and educational.

As online celebrities from Xinjiang with increasing nationwide popularity, Daodao and his friends have helped people all across China to learn about his home.

“So we went into one and shot scenes to show the most up-to-date games you could play at an internet cafe, and to show what life for young people in Xinjiang is really like, that is no different from other places – of course our video was not promoting playing games, but about the funny scenes caused by addiction to playing games.”

“At first, some fans used to ask, ‘Do you ride a horse to go to school in Xinjiang?’ But now many people leave messages like ‘Xinjiang’s so beautiful and I want to go there,'” Daodao told the Global Times.

“I’m really happy to see such a change.”

Daodao said he lives the same modern life as people in other regions of China, but he would certainly treat friends from other places with local-specialty delicacies that can’t be found anywhere else.

Boosted by the huge popularity of the video series, Daodao is making his way into the film industry. He has currently finished shooting two films, one in “Chinese Hollywood” Hengdian, the other in Xiamen, both of which are expected to hit the cinemas early in 2022.