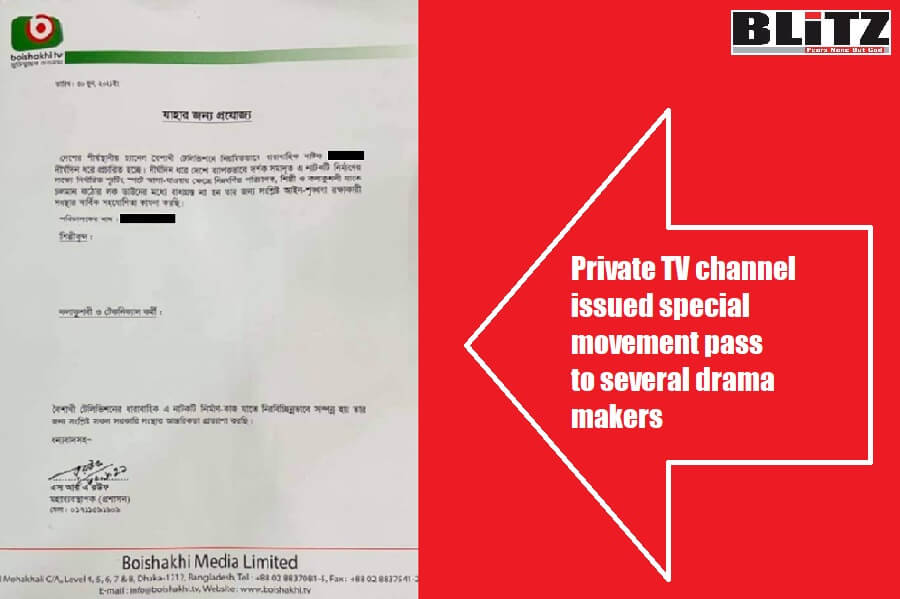 As Bangladesh goes number strict lockdown from July 1, 2021 dawn, restrictions have already been imposed on movements of the people. Members of Armed Forces along side Bangladesh Police, Rapid Action Battalion, ANSAR, VDP and other intelligence agencies are already deployed on various parts of the country. The decision has been taken with the goal of containing the alarming increase in the spread of COVID infections. Meanwhile, a private television channel has reported resorted to illegal means of dodging lockdown and let their drama-making units freely move and continue activities in Dhaka and other parts of the country under the disguise of journalists.

According to information, Boishakhi TV, a satellite-based private television channel has issued several letters to a number of drama makers along with stickers of the channel. In the latter, S.R.A Rauf, General Manager (Administration) has asked the members of law enforcement agencies to allow its drama making teams to freely move and continue activities during the lockdown. Drama makers in Dhaka city are considering such letters as “special pass” for continuation of their activities.

Commenting on issuance of such “special pass” by Boishakhi, a senior official of Bangladesh Police said, “Journalists of Boishakhi TV or other television channels and media outlets are only allowed to move during the 7-day lockdown. But any television channel abusing this privilege of the journalists is definitely illegal and punishable offense. We have instructed Dhaka Metropolitan Police (DMP) to stop any vehicle bearing stickers of any media outlet and check the ID cards of the journalists. If they find any vehicle used for any other purpose than journalistic duties, police will seize the vehicle and lodge legal actions on the spot. Mobile courts will also be vigilant looking for anyone using fake identity of journalists”.

Meanwhile, Bangladesh Film Development Corporation (BFDC) source told this correspondent that they already have issued circular notifying the film directors, producers, actors and technicians that all activities shall remain suspended during the 7-day lockdown. They said, while there will be no shooting of films during the lockdown, how anyone could even think of continuing shooting of dramas defying government’s directives?

It is also learnt from a credible source that, Boishakhi TV, which was earlier owned by BNP leader Mirza Abbas is currently run by one of his close associates. There are plenty of BNP and Jamaat members inside the channel, who might be making foul bids of sabotaging government’s sincere intention of containing the spread of COVID through a strict lockdown. The source further suggested the government and intelligence agencies to initiate an investigation into the case of Boishakhi TV’s issuance of so-called special pass defying government’s directives.

It may be mentioned here that the government has imposed a seven-day strict lockdown all over Bangladesh from 6 am Thursday to curb the spread of Covid-19 in the country.

Strict disciplinary action will be taken only if one goes out without a credible reason during the lockdown, according to an official statement issued on Tuesday.

On Wednesday, the Cabinet Division issued a gazette notification imposing certain rules and regulations for the lockdown.

While speaking to Weekly Blitz, some high officials of the Cabinet Division hinted that the duration of lockdown might be increased after an observation of the situation in the first seven days.

During this lockdown, the people will not be allowed to move outdoors without an emergency. If people fail to have convincing reasons, Armed Forces and law enforcement agency personnel will take action against them to ensure government directives are followed.

In a separate press release, the Inter Service Public Relations Directorate (ISPR) said on Wednesday that, from 6 am Thursday till 12 am on July 7, the Armed Forces would be deployed across the country to curb the wave of Covid-19 in aid of civil power.

According to the Armed Forces Division, troops would be deployed according to the requirements of the district magistrates across the country. DCs will make it known, however, as to how many troops they need, specifying whether they need a strike force, medical assistance force, or both.

Lockdown violators to be arrested, sued

Anyone found to be violating the strict Covid-19 lockdown rules and restrictions would be arrested and sued, Dhaka Metropolitan Police (DMP) Commissioner Mohammad Shafiqul Islam warned on Wednesday.

“If anyone leaves his house without any reason of emergency during the lockdown starting from Thursday, he will be arrested and sued under Section 269 of the Penal Code,” he said at a press briefing at the DMP Media Centre in Dhaka.

He said the section in question included a maximum jail term of six months and a fine.

“This time the police will take tough action against the violators. We are prepared to arrest 5,000 people or more a day from the capital, if needed. Then we will send them to jail and produce them in court,” he added.

Mobile courts would hand down immediate punishments to the violators after questioning them, said the DMP chief.

Replying to a question, DMP chief Shafiqul said: “No motorized vehicles will be allowed to ply the roads, but rickshaws can move to allow people to deal with emergency cases like buying daily essentials, medicines, and taking patients to hospitals. No one will be allowed to use a rickshaw for roaming or visiting relatives”.

Asked about the movements of media persons, he said journalists had been asked to cover their assignments with their ID cards and they could move around the city to perform their duties.

“Police won’t obstruct them. They can also use vehicles provided by their respective offices,” he added.

Responding to another query, the DMP commissioner said police patrols would be increased on main roads as well as in alleys of the city.

Check-posts would be set up at the entrance and exit points of Dhaka city and other important points, and monitoring would be strengthened, Shafiqul said.

In some cases, necessary action will be taken under the Traffic Act, he said.

About the plying of private vehicles, the DMP commissioner said: “No private vehicle will be allowed to ply on the roads but those which have got approval from the government will be permitted to move”.

Besides, he said the relatives of returnees from abroad have no need to go to airports. In that case, the returnees have been advised to hire vehicles from airports and go to their respective destinations, Shafiqul added.

All domestic flights are to be suspended. However, international flights will continue to operate during the lockdown, said a notification issued by the Cabinet Division on Wednesday.

According to sources, the Civil Aviation Authority of Bangladesh (CAAB) recommended the continuation of international flights for returning migrant workers. At the same time, the organization suggested limiting the number of domestic flights for expatriate workers.

On June 4, CAAB issued its latest directive on international flights. In that directive, various conditions were given to 19 countries.

Moreover, no one is allowed to travel from and to Argentina, Bahrain, Bolivia, Brazil, India, Malaysia, Maldives, Nepal, Paraguay, Trinidad and Tobago and Uruguay.

Passengers from Kuwait and Oman need to quarantine themselves in a hotel for three days. Passengers from Belgium, Chile, Colombia, Costa Rica, Denmark and Greece are required to be in quarantine in hotels for 14 days.

They must stay in quarantine even if they are fully vaccinated. All passengers must carry negative PCR test results at the time of arrival.

Bank transaction hours 10am to 1:30pm

Banks will carry out transactions from 10am to 1:30pm during the seven-day strict lockdown till July 7.

According to a notice issued by the Bangladesh Bank on Wednesday, banks can operate until 3:30pm for conducting their other necessary activities during the period Reports UNB.

But the new schedule will come into effect from Sunday, as transactions will be closed on Thursday and the next two days are weekends.

At present, banks carry out transactions until 3:30 pm and remain open until 4:30 pm, against the normal transaction period of 10 am to 4 pm.

The circular said the government had imposed different restrictions considering the current situation of the coronavirus pandemic.

The bank authorities will take measures to provide transportation support to their staff in consultation with the local administration.

The banks will keep their principal and authorized dealer (AD) branches open with required staff while internet banking service will continue for 24 hours a day.

They have to ensure the operation of ATM booths to facilitate transactions through cards by supplying adequate cash in the machines, while evening banking and weekly holiday banking activities would remain suspended until further orders, said a notice issued earlier on April 13.