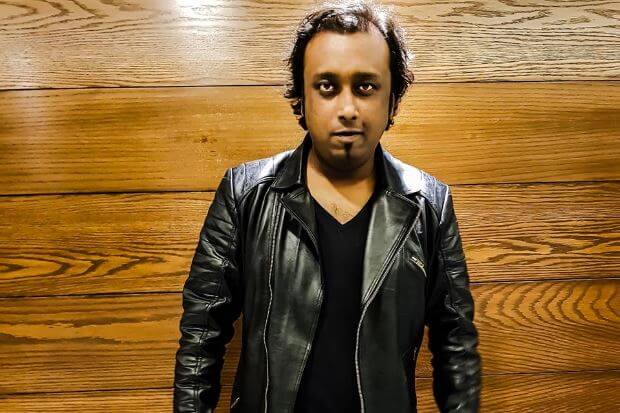 To Bangladeshi music lovers, Rajib Hossain is not a new name. He already has made his position in the music arena in the country, not only just as the best guitarist in the country but also as the most promising and dynamic music director and composer. Though he entered into the musical world back in 1997, Rajib had graduated from Chhayanot, the most prestigious music institutions in Bangladesh in 1993. Yesterday he sat with me and gave an exclusive interview. Here are the excerpts:

Blitz: How did you fall in love with guitar?

Rajib: Since my very early age, I was attracted to guitar. It was my all-time company. Even I used to ask my parents to buy me toy guitar when I was a kid. You can say I fell in love with this instrument since then. Now guitar is my “another girlfriend”, which even is like my lifeline. Without it, I can’t breathe.

Blitz: Do you also play other musical instruments?

Blitz: In music life, who is your inspiration?

Rajib: My mother, although I got inspiration from other members of my family.

Blitz: What will you say about Bangladeshi music industry?

Rajib: I will say – it is progressing. Especially those who are associated with bands, because the band members have to continue practices and that possibly enrich their perfections. On the other hand, unfortunately there are plenty of so-called music directors who basically depend on copy and paste as their knowledge on music is extremely poor. In my personal opinion, for a music director or composer, knowledge on music is essential. Otherwise they really cannot create something special. These people are causing extensive damage to our music industry. They are responsible for destroying our audio industry too.

Blitz: What is your opinion about film songs in Bangladesh?

Rajib: Well, we had a golden era when those famous songs were created. But for past many years, very unfortunately, music industry is dominated by the so-called music directors who know nothing of music other than copying from others. Moreover, there was also a time when most of the lyrics of the film songs were filled with vulgar. Unless Bangladeshi film producers and directors feel the necessity of aborting those wrong people from the industry, film songs won’t really regain its lost glory. Yes, it is true once in a while we still are getting some great songs from the movies. But again, those songs aren’t coming from those so-called music directors.

Blitz: Do you have any dream of working in Kolkata and India?

Rajib: Oh yes, that is my long-cherished dream, which hasn’t yet come true, unfortunately. But of course, if I get call from Indian music or film industry, I definitely will accept that with highest honor and hopefully I can give something new to the audience.

Blitz: You also are a powerful vocalist. But, why you are not regular as a singer?

Rajib: Well, as a vocalist, I am fully dedicated to the band I belong to. Beside this, I did give voice to several songs. But, my profession as a music director and musician takes lots of the time. That is one of the many reasons that I am not a full-time singer.

Blitz: Who are you favorite singers?

Blitz: Who are you favorite singers?

Blitz: As a music director, what makes you sad?

Rajib: Unfortunately in Bangladesh, talented people do not get appreciation or patronization. Those of us who understand music really cannot compete with the so-called music directors, who are more expert in sycophancy than music skill. We really cannot compete with them, because what they easily do for the sake of getting the work is something that I should not even utter while responding to questions from a prestigious newspaper like yours. Just think, if a person is more a pimp than a “music director” can someone like us really or should compete with them?

Blitz: What you do during leisure time?

Rajib: During my leisure time, I listen to songs from various countries, which actually helps me in enriching my knowledge. You know, music is an unending learning process. We never stop from learning.

Rajib: Certainly the song which contains life in it. There is no particular choice in it. For example, I am a big fan of Rabindra and Nazrul songs. At the same time, folk, ghazal, bhazan – you just name it.

Blitz: Will you mention few of the popular songs being composed by you?

Rajib: Up to now, I have composed almost one thousand songs while have played session guitar in over ten thousand songs. I do have a number of super-hit songs, credits of which had been stolen by some of the famous singers in Bangladesh. This makes me feel terribly sad. I am a very emotional person and there are some people, who always take undue advantage of it. For that reason, I really never have complained about anyone who had stolen the credit of dozens of super-hit songs tuned and composed by me.

Blitz: Do you want to say anything to your fans?

Rajib: I want them to pray for me, inspire me the way they always have been, and of course, please listen to good music – original music.