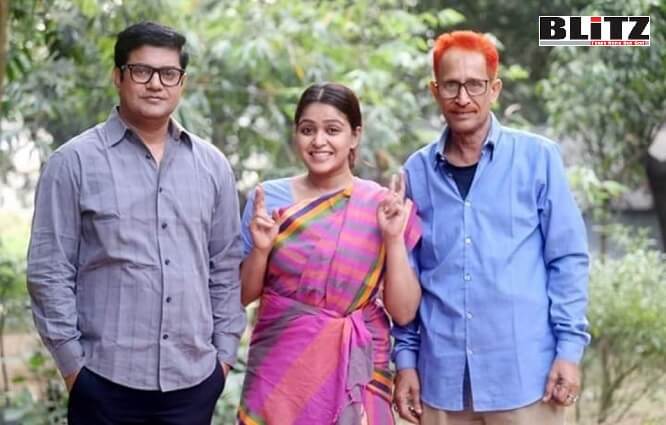 As a performer, she not only is totally committed but also as an individual, Rani Ahad is very much down to earth. She prefers working silently instead of running after much media hype. Recently, she has played the lead role in a special length film named ‘Jonok O Shontan’ (Father and the Child). The film is being made on the upcoming occasion of the birth centennial of Bangabandhu Sheikh Mujibur Rahman. It is based on the story of a Birangona.

Popular actors Ahsan Habib Nasim and Rani Ahad have played the lead roles in the film. Rani will be seen as the Birangona and Nasim has portrayed the character of a teacher. Mahmudul Islam Mithu, Binoy Bhodro, Iqbal, Reshmee, Rana Mollik and others have played important roles in the movie.

The film’s story has been written by Shoaib Choudhury, while screenplay and dialogues penned down by Ferari Farhad. Freedom fighter and film director Nur Muhammed Moni has directed the movie.

The shooting of ‘Jonok O Shontan’ has concluded recently in Dhaka city.

Director Nur Muhammed Moni said, “Being a freedom fighter, to me Bangabandhu always has a very special place. The story and screenplays of this film are extremely powerful”.

Ahsan Habib Nasim said, “Thanks to Moni bhai for involving me in this project. As it is a special film I have tried my hundred percent to bring out my character. With Rani this is my first work and she is very serious about acting.”

Rani Ahad said, “I am honored to be a part of this film. I was getting emotional in each of the sequences of the film and felt the pain of a Birangona. I have tried my best and hope, people will appreciate our work”.

‘Jonok O Shontan’ is produced by Crown Entertainment. The executive producer is Tajul Islam. The movie will be released on a private satellite channel in March next year on the occasion of the birth centennial of Bangabandhu.

Commenting on Rani Ahad, director of the special length film, Nur Muhammed Moni said, “She indeed is a brilliant actor. But I am touched by her commitment to the work. Rani came to the shooting ignoring high fever and on that very day, her sequence was bathing in a pond. It is not an easy task for anyone especially during the early hours of the winter. Initially, I was a bit hesitant if I should ask Rani Ahad to go for the sequence as we already knew she was having a high fever. But she just ignored the fever and dedicatedly gave the shot. It’s amazing! We rarely see such commitment to work in many of the actors in today’s world”.

Commenting on the film, Rani Ahad said, “I loved the script, which is written by Ferari Farhad. It is extremely powerful. Moreover, the song in the film is really marvelous. I believe, people will appreciate this work”.

Meanwhile, Tajul Islam of Crown Entertainment said, they are going to cast Rani Ahad in their upcoming project.

He said, “Rani [Rani Ahad] is a very committed and dedicated actress. She gets indulged in the character and makes efforts of giving the best in her work. This is something every production company would look for. We are equally thankful to popular actor Ahsan Habib Nasim, Mahmudul Islam Mithu, Binoy Bhodro, Iqbal, Reshmee, Rana Mollik and every member of the unit”.

‘Jonok O Shontan’ is already receiving appreciation from the Bangladesh media as well as the media circle. It is being widely covered in most of the mainstream newspapers in the country.

Sources at Crown Entertainment told this correspondent that they have several plans of making few more telefilms, short films, musical videos, dramas and a full-length feature film marking the occasion of the birth centennial of Bangabandhu Sheikh Mujibur Rahman.