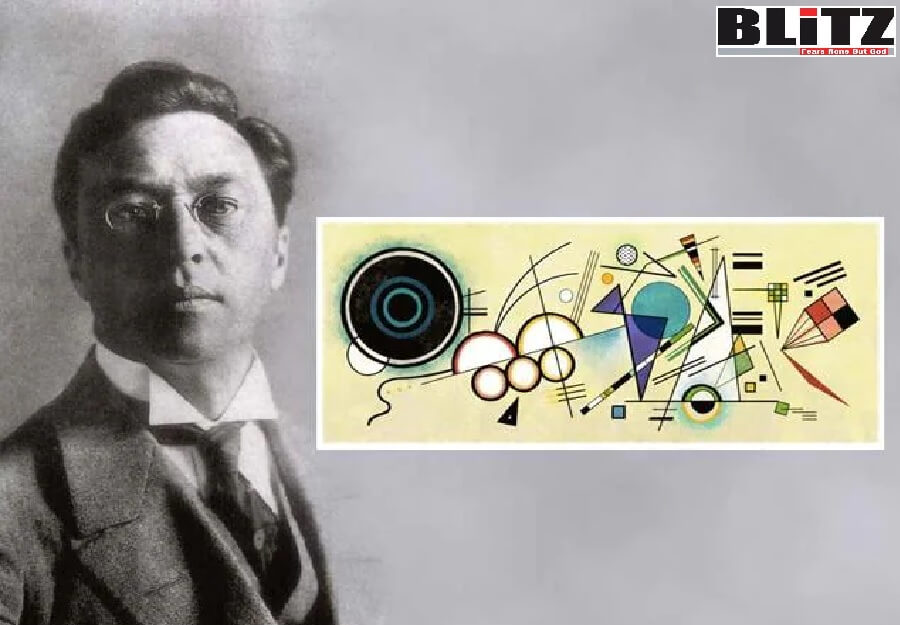 The Russian-born artist Vasily Kandinsky (1866-1944) was one of the early pioneers in the field of abstract painting – along with Kazimir Malevich, Piet Mondrian, and Hilma af Klint, among others. Through September 5, New York’s Guggenheim Museum is hosting “Around the Circle,” an immense retrospective of this extraordinarily innovative and influential painter – one that invites us to rethink Kandinsky’s contribution in light of his anarchist social thought, his interest in the emancipatory potential of synesthetic experience, and his determination to explore the possibilities of mon-representational forms.

The historian E.H. Gombrich remarked that Kandinsky “was really a mystic who… longed for a regeneration of the world through a new art of pure ‘inwardness’.” To be sure, Kandinsky’s work is shaped throughout by his conviction that art has the power to transform the individual and society – and to affect the kind of inspiration or awakening which can lead us beyond the psycho-social coordinates embedded in capitalism.

Two thinkers who would greatly influence Kandinsky were the anarchist philosophers Pyotr Kropotkin and Gustav Landauer. Kropotkin (1842-1921) would argue against the social Darwinists who viewed the natural world as ‘red in tooth and claw’ – the war of all against all, as Thomas Hobbes famously put it. In fact, as he took great pains to show, the natural world was predominately based on cooperation, or what Kropotkin would call ‘mutual aid’ – and indeed, he was able to turn to Darwin himself in making this case. The upshot was that such mutual aid could and should serve as the ecological basis for human relations; in contrast to the artificial competitiveness perpetuated by capitalism.

For his part, Kandinsky sought the close collaboration of like-minded artists and would have nothing to do with those whose crass materialism urged them to thrive in the brutal world of capitalist competition – for “hatred, bias, factions, jealousy and intrigue are the consequences of this purposeless, materialistic art,” as he would state in what is perhaps his most well-known book, Concerning the Spiritual in Art (1912).

Gustav Landauer (1870-1919) embraced a kind of mystical anarchism, which went a step beyond Kropotkin who he knew personally, and whose writings he translated into German. The state was not, as Kropotkin thought, an institution that could be wiped out by a revolution – rather, it was “a condition, a certain relationship between human beings… we destroy it by contracting other relationships, by behaving differently.” Revolution can only be successful when “we are seized by the spirit, not of revolution, but of regeneration.” As he would write in “Anarchic Thoughts on Anarchism” (1901): “Hence, not war and murder – but rebirth.”

Kandinsky shares Landauer’s view that the authentic artist can provide a sensual expression of this inner renascence, this new life in the face of decadence and profound ‘spiritual darkness.’ Central to the radical ecology of Kropotkin and Landauer was the call for spiritual and ethical renewal; and Kandinsky fully endorsed their view that art could serve as the means to restore the self to wholeness and achieve the regeneration of humanity.

To begin with, Kandinsky was well aware of the effects that pure color could have on our state of mind – the way in which, for example, a bright red could affect us like the sound of a trumpet. Likewise, sounds or music could in their turn produce imagery. This unity of the senses – the experience of having perceptions in one sensory modality triggered by a stimulus from another

– is known as synesthesia; and in some individuals it is highly developed, involuntary, and insuppressible. Kandinsky would describe such a synesthetic episode while attending a performance of Wagner’s opera Lohengrin (1850) at the Bolshoi Theater: “I saw all my colors in my mind; they stood before my eyes. Wild, almost crazy lines were sketched in front of me…” The thirty-year old Kandinsky was pursuing a law degree in Moscow at the time; but after that experience he abandoned his law career and left Russia to study painting at the prestigious Munich Academy of Fine Arts in Germany.

In his classic work, The Phenomenology of Perception (1962), the philosopher Merleau-Ponty argued that “synesthetic perception is the rule…” that is, the overlapping and intertwining of the senses is consistent with our primordial and preconceptual experience, which is inherently synesthetic. We have, in fact, “… unlearned how to see, hear, and generally speaking, feel….” Synesthetic experience seems anomalous because we have alienated ourselves from direct experience with the things that surround us. Retrieving this capacity means overcoming our estrangement from the world, with all the implications that has for our social, cultural, and political renewal.

His exploration of the unity of the senses would in time push Kandinsky beyond representation and transform his canvases into ‘compositions’ or ‘improvisations’ (as he called them) ever more akin to music. Just as a deep bass tone would produce a certain emotional response, so a color, or combination of colors (a ‘color chord’) would generate a spiritual vibration or ‘inner resonance.’ The Blue Mountain (1908-09) offers a striking example of Kandinsky’s expressionistic use of color. The lower third of the painting includes six figures, three of whom are astride horses at full gallop (one of his favorite motifs). They are flanked by two large trees that dominate the middle ground and extend to the top of the canvas: the one on the left is predominantly yellow, while on the right the tree is largely red-orange or vermillion. In the background and between them looms the large blue mountain of the title. For Kandinsky, yellow and blue constitute the primordial contrast. Yellow has an eccentric movement and seems to draw closer to us. Blue is concentric, implies depth and movement away from the viewer. But Kandinsky has not painted the mountain blue simply because it is farthest away from us: unlike yellow, which is terrestrial, blue is celestial and awakens our highest spiritual aspirations.

Kandinsky was determined to probe the nature of synesthesia when he became a founding member of Der Blaue Reiter (The Blue Rider) group in 1911, which included, among others, Arnold Schoenberg and Franz Marc. Their aims were ambitious, to say the least: to generate a “große Umwälzung” (great upheaval) that would not only defy traditional modes of artistic production, but awaken us from “the nightmare of materialism, which has turned the life of the universe into an evil, useless game…” (CSA, p. 2); and finally usher forth “a new spirit won by the conquest of one’s inner self,” as Landauer would put it, “We are all waiting for something great – something new.”

If we take our time with Kandinsky’s canvasses, we will discover that what at first may appear as mere abstraction, in fact contains representational elements which have been aesthetically transmuted into something altogether different, while still retaining their original reference, as in a kind of dream. “I did not wish to banish objects completely,” as Kandinsky explained in his 1914 Cologne Lecture, “objects, in themselves, have a particular spiritual sound, which can and does serve as the material for all realms of art…” The familiar is defamiliarized and reality becomes like a dream just when our everyday, codified ways of navigating the world are suspended, or bracketed.

Take Small Pleasures (1913) for example: at first glance we may not realize that we are looking at a landscape with the sun in the top left corner and the moon on the right. In the center of the painting, we find something like a large hill with a winding stream and atop which is a kind of citadel with trees, as well as echoes and re-echoes of the sun and moon – almost as if it were a landscape within a landscape. On the right-hand side is a boat with three oars jutting out; and above which an ominous black cloud has gathered.

In Picnic (1916) the representational elements are more clearly delineated, but again one must look carefully to appreciate all the wealth of imagery contained in this relatively small watercolor. There are two women in bell-shaped dresses and hats; the one in green sits upon a picnic blanket, the border of which has been richly designed. Beside her is a yellow wicker basket, out of which has been laid a baguette, an apple, and a decanter of wine. Yet one could easily miss all of these and other fine details, in part because Kandinsky has placed and oriented them unconventionally within the overall composition.

After 1920, Kandinsky’s lyrical abstractions would be succeeded by geometric compositions, which he regarded as more universal in their significance, less bound up with the “particular emotions that are characteristic of man in his individuality.” As the German philosopher Karsten Harries would observe: “Kandinsky’s desire to penetrate to more fundamental levels of reality led him to develop an art which seems less spontaneous, colder, more cerebral.” In seeking to expunge from his work all personal associations, Kandinsky turned to the “impersonal language of geometry and in clearer, less suggestive colors” – but, for all that, his canvasses were no less dramatic or intense.

Kandinsky clearly held the circle in the highest regard – his enthusiasm for it seems almost boundless, not because of its geometric form as such but rather due to its inner force: “I find in circles… inner possibilities.” The circle is at once a symbol of renewal, and wholeness – as well as signifying the Self, the infinite, eternity, fulfillment, cosmic unity, and God. Kandinsky’s imagery drew upon shamanic traditions, and included motifs acquired from Finno-Ugric, Russian and Siberian folklore. For example, in Around the Circle (1940), a red and black circle with a “golden all-seeing eye” dominates the painting and may be regarded as the primary stand-in for the self. Beside it is a form resembling a bird as it ascends toward the upper right corner; and adorning this creature is a serpent and crescent, which may be indications of its potency, including its power to serve as a bridge between worlds, or dimensions of consciousness. In the lower left, three unsupported steps lead to an open doorway through which we can see a moon glowing in the distance. Kandinsky was fond of stairs and ladders, which would reappear in a number of paintings from this period: like the bird they could be viewed as suggesting the capacity for spiritual transition and transformation.

What Kandinsky sought to achieve may seem to us to be beyond the scope of painting or art in general – for we inhabit an era that has come to doubt, if not cynically mock, the radical potential of art to heal the self and transform the psycho-social life of humanity. Fortunately, there is perhaps no greater venue to appreciate this collection of paintings than at the Guggenheim Museum: a body of work that so readily pays homage to the circle – that invests such energy in the inspirational and transmutative power of the circle – is especially at home in Frank Lloyd Wright’s concentrically circular temple to art. Kandinsky’s greatest works function almost like finely wrought keys, designed to unlock the hidden recesses of the self, and reach into “the caverns of our souls,” to quote Landauer once more – so that we may discover our “most authentic and precious inner being and… become one with the world in a mystical union.”