Mohon Ahmed is an emerging name as a drama maker in Bangladesh. Due to his dedication, Ahmed is enjoying growing popularity within the viewers of Bangla drama. With the advancement of technology and introduction of OTT platforms worldwide, while most of the production companies and drama and film makers are eyeing on OTT platforms, Mohon Ahmed is also all set for seeing his existence in the OTT platforms with various types of contents. Recently, this young and promising drama maker has talked to Blitz. Here are the exceprts.

Blitz: You are a contemporary popular maker of drama. What is your opinion about trendy dramas, which are enjoying larger viewership in Bangladesh?

Mohon Ahmed: In my opinion, we consider those dramas as ‘trendy’, which enjoy popularity and better viewership both on the television channels and digital platforms, such as YouTube channels. Dramas are being judged according to its viewership. This is the visible reality, and I think, this is not a bad trend.

Blitz: Do you think, Bangla dramas are losing popularity if we compare it with those of the 90s? It is said, in recent time, makers are giving much preference on casting than the story. What is your opinion?

Mohon Ahmed: Everything changes with the passing of time. This is the rule of the nature. There was a time in Bangladesh, when we had only state-owned Bangladesh Television. There was nothing called digital platform. Now we can watch a drama or film from anywhere in the world because of YouTube and OTT platforms. To me, self-satisfaction is more important than popularity of my works. And story has always been given preference, now and the past. Artists are selected based on the requirement of the stories. 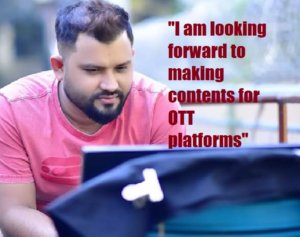 Blitz: In your opinion, what are the differences between a drama director and a film maker?

Mohon Ahmed: Film is a broader canvas, while television is a smaller platform. Definitely there are differences. In films, a director can portray the story in the wide canvas, which is an advantage.

Blitz: Currently, most of the theaters (cinema halls) are being shut-down. At this stage, do you think, producing a film is a risky venture, as far as return of investment is concerned?

Mohon Ahmed: Not all the cinema halls are already shut down. We need to show patience in every walks of life. We need to wait for the final hour. Possibly there will be an alternative, if the cinema halls get closed. On the other hand, if we can make good movies, people will once again feel interested in going to cinema halls for watching movies.

Mohon Ahmed: Absolutely now! Instead, because of OTT, the prospect of works is being widened – newer market for Bangla contents are being created.

Blitz: Are you interested in making contents for OTT platforms? Why?

Mohon Ahmed: Certainly, I am looking forward to making contents for OTT platforms. We need to remember; OTT platforms are reaching millions of viewers throughout the world. This is an advantage for us. We are getting access to larger number of viewers, at the same time, there will be competition amongst the makers from various countries in giving better contents to the OTT viewers.

Blitz: Several individuals and companies in Bangladesh are isolatedly working with various OTT platforms and supplying contents by buying those from local makers. Even some of those individuals or companies are unknown in the media circuit in Bangladesh. What is your opinion about this? As a maker, what do you think about getting the invested amount returned from the OTT platforms?

Mohon Ahmed: I am a maker. My task in making. Business is not my headache. That is something producers or production companies will think.

Blitz: ‘Syndicate’ is a word very much familiar within the media circuit in Bangladesh. Some artists are accused of forming syndicate amongst themselves, thus making the entire industry almost captive. What is your opinion about such syndicate?

Mohon Ahmed: I don’t believe there is any syndicate, whatsoever in Bangladesh. Rather it is up to a director and producer to decide which artist they are willing to cast or looking to engage in their projects.

Blitz: Amongst the existing production companies in Bangladesh, Crown Entertainment is a leading organization. Recently, Crown Entertainment has declared of producing several projects such as web-films, web-series etcetera for an international OTT platform. As a maker, how do you see such initiative?

Mohon Ahmed: Crown Entertainment is an experienced production company. They should definitely produce contents for OTT platforms. I would like to welcome such initiative.

Blitz: Indian OTT platforms Zee5 and HoiChoi have already started buying contents from Bangladesh. Some of those contents have are also seeing popularity and great response from the viewers. As a maker, what type of stories you would prefer for OTT platforms?

Mohon Ahmed: I will select only those stories, which would be liked by the viewers, be it romantic or thriller or family based one.

Blitz: What is the difference between YouTube channel and OTT platform?

Mohon Ahmed: A viewer can watch a content on YouTube without paying any subscription, while on OTT they need to subscribe it by paying monthly fees.