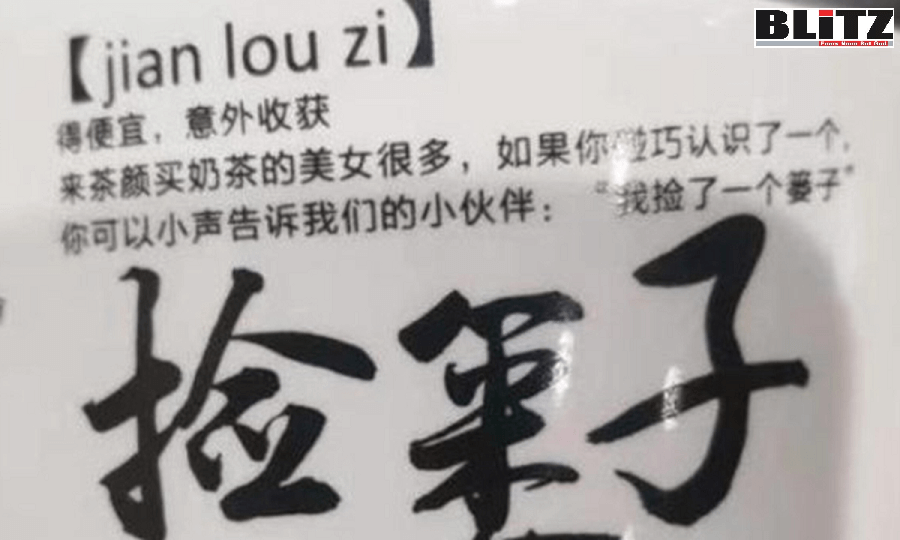 A popular brand that originated in the city of Changsha in Central China’s Hunan Province, Sexy Tea introduced a mug sporting the sentence “There are many gorgeous girls who come to us to buy tea. If you meet one by accident, you can secretly tell your mate that you had just jian lou zi.” Jian lou zi is a local slang term that means “get a bargain.”

The slogan raised people’s ire after attentive netizens posted it on China’s Twitter-like Sina Weibo last week. Some accused it of being extremely offensive for objectifying women.

“Describing women as a bargain. I can’t believe this is an advertisement from today. Disappear you primal uncultured brand,” wrote one netizen on Sina Weibo.

“Stop thinking of women as men’s treats!” said another.

Sexy Tea tried to contain netizens’ anger by issuing an apology on Friday, emphasizing that though it was wrong to use the “inappropriate slogan,” the company intended no harm but used the term purely for creative purposes and to mean “be lucky.”

“Stop shifting the focus, it was the way you used it. The slogan is ok. I’m from Changsha, and we use it every day, but nothing sexually suggestive like this,” said another netizen on Sina Weibo.

The brand also explained that they had already resolved the incident by replacing the offensive slogan with a new line on the mug after the first batch went to market in 2020.

However, this is not the first time that Sexy Tea has used sexually suggestive phrases as netizens had uncovered other examples. Amongst these, the most outrageous example is a tea bag sporting the line “Master, I want you” on its packaging along with images of tadpoles, which many netizens believe are supposed to suggest sperm.

“Sex attracts attention. It has always been a popular choice for companies to use for effective marketing campaigns, especially for those who produce less serious everyday products,” Sally Xiao, a marketer who specializes in advertising and branding, told the Global Times on Sunday.

“If it is to arouse consumers’ desires, there is nothing essentially wrong about that. But if it goes beyond suggesting ‘sex’ as a common desire and says that one gender can take advantage of another, like the Sexy Tea case, then it is a failure, both morally and marketing wise, because you need to do extra crisis management.”

Sexy Tea made another apology on Saturday on its official Sina Weibo account admitting that the company had been trying to use the sexualized marketing and had not considered the consequences.

The conversation online also expanded beyond the Sexy Tea controversy as many netizens noted that sexualizing women is a fundamental issue in the advertisement industry.

“Like that PurCotton advertisement. The pathetic fact is that I don’t think they know they have insulted women when they design such a disrespectful commercial” wrote one Sina Weibo user, referring to a controversial make-up remover ad from cotton company PurCotton that seemed to suggest a woman’s safety depends on their appearance.

“Though it was clearly inappropriate, I personally think the taste of the tea is what really matters,” said a Sexy Tea female consumer in Beijing on Sunday.

“I will definitely choose another brand, and my girlfriend will also do so. Their products are not irreplaceable whatsoever,” said a 26-year-old male consumer on Sunday.