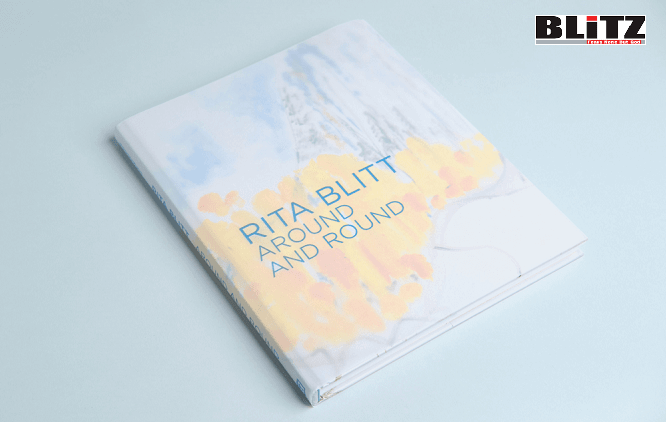 The bountiful new book, Rita Blitt: Around and Round (Tra Publishing, 2020), looks back at the long and prolific career of this notable American artist. If Blitt’s work is about anything then it is about the exuberance, the joy, the sometimes almost mad ecstasy of creative spontaneity. Much of her work is suffused with a kind of wild and kinetic extemporaneity, which seems to resound with a forceful but unforced “Yes!” – a Yes to life, a Yes to the world, a Yes to the here and now, the living moment pregnant with infinite possibility. Her gestural art is dynamic, uninhibited, and no less sensuous for being abstract. In the improvisational, rhythmic musicality of her paintings, Blitt expresses with unerring directness the energy and intensity of embodied imaginative experience.

We can find the precursors to Blitt’s work in the Abstract Expressionists, in Jackson Pollack, and certainly Franz Kline. But perhaps the most revealing historical antecedent for appreciating Blitt is the often overlooked but immensely important Swedish artist, Hilma af Klint – the first Western painter to produce non-representational, or abstract art. For af Klint, painting was a way of communicating the hidden, spiritual nature of Reality, which could only be conveyed non-representationally. One of the techniques she utilized was automatic drawing – what some might call doodling, but which is in essence a way of “creating art without conscious thought.”

For Blitt, this is indeed the seedbed for everything else that grows and follows in terms of artistic production. Her immense, even heroic, sculptures – dozens of which can be found around the world – have their origin in automatic drawings. “My spontaneous lines are the essence of me…” This automatism is a technique which seems especially well-suited to allowing the artist herself to become a pen or brush in the hands of something if not higher, then certainly more primitive, more primordial than her conscious ego or empirical self.

Rita Blitt paints with two hands – which is not to say she can paint with either hand; but that she paints with both hands simultaneously. Just as a musician uses two hands to play an instrument. And the comparison is both telling and illustrative. Music, and dance, are extraordinarily important for gaining a full understanding of Blitt’s work and her achievement as an artist and a painter. One of the ways in which Blitt is perhaps most indebted to Pollack is that, like Pollack, her paintings record not an experience so much as an event, an action – or, if you prefer, a dance. A choreographer recalls being in the studio with Blitt and “she was moving as fast as the dancers, sweating too, whipping out drawing after drawing.”

Some of Blitt’s most arresting work is accomplished with only bold black lines – such as the Copland Appalachian Spring Series (1995). Sometimes she will add a smattering of color, with dashes and flakes of bright yellow and red – as, for example, in the collage series Feeling the Music (2008). But Rita Blitt is also a consummate colorist, quite capable of departing from the gestural spontaneity which is most characteristic of her work. In the 1980s, she embarked on the Oval series, which included a number of pastels and paintings, and were far more chromatic than linear, recalling the ‘color-field painting’ of Mark Rothko. Among the most successful of these is the oil on canvas Finding Center (1983), with its womb-like pointed oval, and striking use of modulated yellows. Blitt would return repeatedly to this form; for example, in the pastels Seeking Inner Peace II (1984) and The Glow of Red (1984), both of which demonstrate her profound sense of color.

The richness and variety of Blitt’s color palette is on full display in such works as Aspen Morn (1964) and Hand of G-d (Beyond) (1990). These acrylic paintings push the bounds of landscape art so much so that they verge on abstraction. Hillside, trees, sky, and sun seem almost ready to dissolve into each other, as if we are witnessing these scenes in a kind of dream. Rita’s brush is intoxicated by the delirious beauty it wants to capture. These and other paintings inspired by the Aspen countryside – including the all but abstract Happy Rocks (1966) – reveal a deep and abiding love of the natural world.

Rita Blitt: Around and Round is a richly satisfying book, not least because it spans seven decades in the career of this artist, from the 1950s up until the present, including paintings from 2019. At nearly 90 years of age, Blitt has revealed herself to be a prolific, dynamic and varied artist, comfortable working with different media and on vastly different scales. What unites her body of work is first and foremost that she is essentially an affirmative artist. Her work is joyous, celebratory, and even “a search for the sublime.”

In drawing, painting and sculpture, Blitt is a tireless, indefatigable but always honest investigator of the power and significance of line, and linearity. In the hands of an artist a line can function like a lock-pick in the hands of a thief. What the artist will deftly reopen is that secret storehouse of Being, a treasure that the world wants to hide and at the same time unfold – renewing in the process nothing less than the mystery and wonder of our communion with the wellspring of Life. In Rita’s hands, lines may undulate, and flow, curve, swerve, dart, or recede, halt, break, veer off or return. They can surprise, delight, soothe or unsettle. They can be bold or delicate, fine as thread or thick as rope. They are, however, always her own – a truthful exploration and expression of our being in the world.

For Rita Blitt, art is music, art is dance – which is just to say, art is life. Drawing, painting, and sculpture are ways that we remind ourselves of what it feels like to be alive, to be truly and immensely alive. Her work has the merit of insisting that to be a living part of humanity is to be an embodied being, sensuous, and awake to each of our senses. Rita paints with both her hands just as we grasp the world with both our hands. Her work is a testament to the artist’s incessant striving towards the fullness of existence; an unfettered expression of the infinite bursting forth from our finite selves, and the inexhaustible wonder that stirs within the very core of our being.