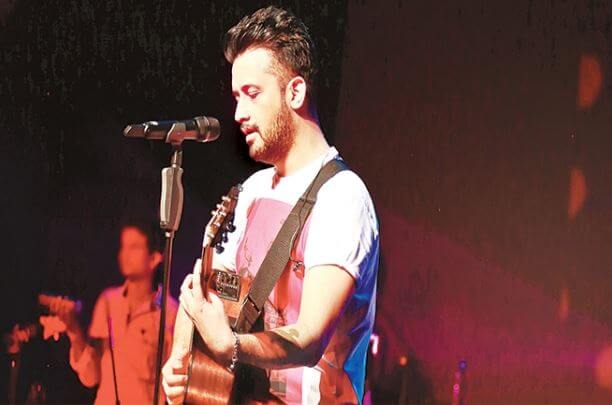 The last time I sat down with Atif Aslam for an extensive interview such as this, the year was 2015 and he was in Karachi to record for a Coke Studio session. Having embraced marriage and fatherhood as well as negativity that constantly blacken our lives, it had hit a point that Atif had started writing negative, original songs, which he then discarded.

A lot has changed since then. A new government is in place and many have faith that change will come for the better. Naive as that may be, Atif Aslam, too, has faith, as he admits.

But the one thing that has remained a constant is Atif’s invincibility when it comes to being a singer. He is beyond geography and political upheavals.  Despite a ban on Pakistani artists in India, his songs continue to fly high. With more than 20 million fans on Facebook, who are just as dedicated to him as they were four years ago, and singing songs that have amassed millions and millions of hits on YouTube alone, his star power has not diminished.

A fan from India even began writing to me after I shared a picture of the man, asking when his interview would be published. Geography doesn’t matter to Atif Aslam fans – who call themselves Aadeez – and it doesn’t matter to him because as he plays concerts around the world, he believes he is representing Pakistan. He maintains faith in the establishment, the current Prime Minister, Imran Khan, and the military who, in his eyes, continue to protect us. But shooting from the hip about matters that are dealt on a much higher level is not something Atif likes to do. His concerns have to do with culture.

Like last time, we meet at a hotel, but, this time we meet at Movenpick Hotel in the executive business lounge. The interview is therefore both in public eyes and yet not so accessible that fans come up every five minutes – cutting the interview for a selfie with the superstar – as was the case last time. The interview happened out of the blue in a sense. Atif was coming down to Karachi for two days at most and we managed to scrounge up some time to talk.

The difference was palpable because this time as Atif walked in and sat down, he had jotted down things on a piece of paper that he brought with him and wanted to speak about, which we will get to – shortly. This was a first.

I want to break free

Though Atif Aslam is quite possibly the biggest star in the country and beyond, and sits on the Iron Throne of music, he neither indulges in interviews nor does he associate himself with a PR company – unlike his peers. Why? He doesn’t feel he needs to do it. But Atif Aslam, the musician, is always in a tussle, not with himself but with media and critics. Is he only a playback singer now? Is he always on tour? Where is the man who emerged with ‘Aadat’ (with Jal) back in the noughties that is still moving and still embedded in memory? None of these questions bother Atif Aslam; he’s far too experienced but when called a “traitor” for not holding a flag at an event where he is in fact representing Pakistan – a story that snowballed out of control in print and on television – he is seriously displeased. Even other artists didn’t hold back on commenting on it and as Atif and I both know, those very artists now possess withering star power and some skewed views. It is this that he finds intolerable, having spent 15 years in the music scene with a body of work that appeals to a huge number of people around the world, not just India and his homeland. An example: the tweet by DJ/producer Marshmello to Atif to directly message him on Twitter, recently.

But let us begin with the musician who delighted fans with his original song, ’12 Bajay’ that was dropped in December (2018) with an original music video, directed by the hugely talented Zeeshan Parwez. The song, apart from being right on the money if you hear it on a loop, had been recorded at Sunset Sound Studio in California where the likes of Prince, The Rolling Stones, The Doors, Led Zeppelin, Van Halen and The Black Keys and many others have recorded in the past. That was a personal high for Atif Aslam. This is where the story begins.

Was ’12 Bajay’ autobiographical in the sense that the music video shows how Atif travels from one place to another for a show, the recording of a song and held a resemblance to the music he did when he began his musical career, I ask Atif. “No, it wasn’t autobiographical,” he begins. “But a likeness to the Atif Aslam sound was deliberate,” he confirms. “I’ve done a lot of playback singing.”

Those playback numbers are successful but they have to fit within the narrative of a film and therefore represent situational music. “I’m not exactly sick of doing them but there was nothing new in terms of learning for me. I wanted to test the waters and put out my gut that I want to produce this kind of music. This is who I was and this is who I am,” he says. “So let’s put it out there and if you try and listen closely, it has very deep meaning. He refers to the lyrics: ‘Kis tarah Aitbaar kare/Duniya pe/Chor hain bazaaro mein’. At the same time, I wanted the video to be like that.”

Atif continues: “People just get to see me onstage and they don’t get whole of me. It was my journey over the last 15 years and what I have done. I have worked for this country – whether I’ve done it in the country or outside. Whatever venue I had found, I have explored and played. And I don’t think others have played at such venues, cities, countries.”

The lack of music channels, the emergence of corporate platforms, and the decision to not play Pakistani music 24/7 by radio channels has created a situation where the perception is that music is not being made. But artists are making albums, EPs.  The real issue is of visibility.

It has led many to the realm of acting. The last time I asked Atif, he said if something good comes along, then sure. Is he still in the same space now that Pakistani cinema has found resurgence?

“Not at the cost of giving up my singing career,” he says. “Playback is a part of the film and it is made in a different manner. It’s not that art-form where we made what we really thought.”

“My intention now, more than anything, is to promote kids, and deserving musicians. Because the time I’ve seen, I want them to see a better one.”

He speaks of the young Hadia Hashmi who joined him onstage during a show. He speaks of the fans who he maintains are his greatest reward, not the awards that happen in Pakistan where, he says, a body of work within a year is not what an artist is judged by.

To Atif, it is of utmost importance that people do their groundwork before organizing a concert. “I’m not only concerned by the women who come to my show but families, everyone.”

I ask Atif Aslam about Pepsi Battle of the Bands, what was it that really happened? It was rumoured that he charged too much money.

“No,” a steadfast Atif responds. “To be honest, I don’t ask a ridiculous amount from people. Because it becomes an excuse for people to not have me. Just because I don’t sign up with any PR companies recommended or I don’t hang out or show-off with them, just because I don’t go to certain parties held by powerful people within the entertainment industry, it means I’m just too expensive and people can’t afford me.”

Okay, but Pepsi was about new kids?

“Was it?” remarks Atif, before saying: “Where’s Kashmir? I’m just saying if it was about kids, where are they?”

Kashmir’s album came on the Pepsi Battle of the Bands website before disappearing but when asked earlier about this diabolical occurrence, Kashmir said they had no clue. But neither did they come out against Pepsi and were happy that they got paid, which allowed them to build their own studio. They are working on new music. A young band, hoping to make it to mainstream, will not discuss such matters. It’s a truism for Pakistani music scene.

“It is said by corporates that we have a very small budget but the popularity, recognition and brand value they attain from these platforms, isn’t about the agencies and who hired whom….”

In other words, the judges bring the audience and experience. Thus, they must be recognized to some degree financially.

I tell Atif, Kashmir, for instance, remain a bunch of introverted individuals, and won’t say anything. He retorts: “Obviously. I spoke to them. And they told me they’re working on an album and I told them that it is the smartest move. You must because you should not stop producing music. Don’t stop even if you can’t release it.”

Is that your reason for stepping away from the show – I ask Atif Aslam – that has since changed producers with Shahi Hasan stepping in as producer and Bayaan having won the last season. Xarb, the runner-up band, who in my opinion, should have won, are getting their EP produced by Zain Ahsan. Bayaan, too, have a bigger, better deal. So, perhaps things are improving in the land of Pepsi Battle of the Bands. A new season is also on the horizon.

When asked why Atif Aslam – the only contemporary artist from Pakistan – is still on Indian YouTube channels and was taken off before being put back on, he clarifies, “It happens. I don’t know. I think I’m really loved over there (India) by fans. Border-ban has appeared often but I personally don’ know the reason for this – why I was taken off and was back on YouTube. The fan following in Pakistan and India is huge, which is perhaps gauged by the numbers. I feel it is the response of the fans.”

Among the loyal fan following, in this age of trolling and hate, there is always one or two who label artists. I ask Atif if he fears there will be a negative check against him.

“The trolling has been going on for 15 years; it began when I started my career. Now it has become more visible. People can see it. Everybody has haters. Media can hype up things…”

You don’t trust the press, the media?

“Do you think I should,” asks Atif rhetorically.

“At least the news should be right, confirmed. There are no checks and balances. Personal grudges come out and the work of 15 years by a person is suddenly zero.”

He wants the government to care about culture so the future generation does not struggle like the greats, so that fake concerts are not taken seriously and end up hurting fans and for all concert organisers to do their homework.

Personally and as for now, Atif is “happy”. He spends time with his son by taking him to Disneyland and going on road trips. Now on a time-out, Atif confesses that he is focusing on his family and recording new songs, like a rolling stone.