Once anyone will Google the name – Abhigya Anand, every news media in the world is having at least one item on this Indian boy, who reportedly forecasted the emergence of coronavirus months before it had hit the world. He is being projected as a “mysterious child”, a “future godman” and even as “a powerful astrologer”. But, in reality – he is a kid being wrongly used by his parents with doctored videos and false information. For this reason, YouTube has been banning a number of Abhigya Anand contents from his channel.

On July 15, 2020, Abhigya Anand predicted the final death toll in India on his Facebook page, where he wrote, “My final Predict 27,500 people will die in India due to Coronavirus.” Has it not been proved as utterly wrong? Now let us read a few of the comments on this Facebook page post:

Rupinder Kaur: U always change this is not a prediction.

Celik Andreea: Don’t get so closed to penalty with your settings, it’s a heavy karma.

Harshda Jain: This is your third prediction. First, you said 3300 then 10000 now 27k. What’s this. Why are you changing your prediction. 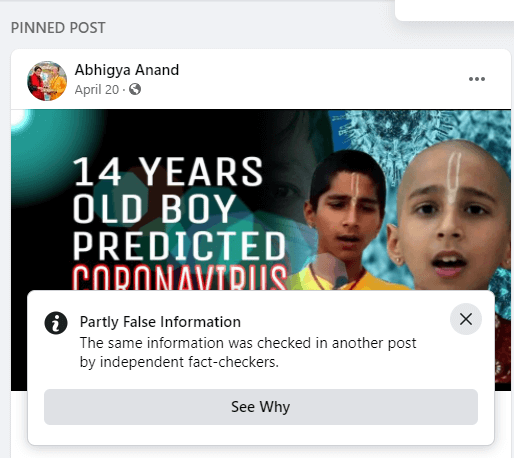 Abhigya Anand and those behind him are committing crimes punishable under the Indian IT Act. Here are a few of the sections, which would be applicable in this case:

Section 66D of the IT Act prescribes punishment for ‘cheating by personation by using computer resource’ and provides that any person who by means of any communication device or computer resource cheats by personation, shall be punished with imprisonment of either description for a term which may extend to 3 (three) years and shall also be liable to fine which may extend to Rs. 1,00,000 (Rupees one lac).

Furthermore, Abhigya Anand and his family may face legal consequences for spreading misinformation during the pandemic.

The world has been battling a deluge of misinformation and influence operations for a long time now. The advent of internet, social media platforms and real time messengers has given a free run to criminals, miscreants, nation states and other motivated actors. In fact, society, today is experiencing something called an ‘information disorder’ where it has become extremely difficult to disambiguate truth from falsehood. 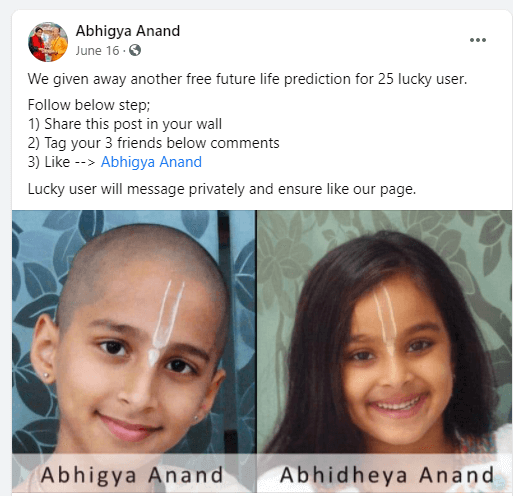 Covid19 spread to almost 190 countries, and with more and more people forced to stay home during quarantine, internet usage is bound to be higher than usual as people have resorted to online platforms for working remotely, seeking knowledge, reaching out to loved ones and also at the time of crises people are eager to share personal details and any misinformation at this crucial time can have devastating effect.

Tensions have always been a breeding ground of information operations. The Covid19 pandemic has provided such malicious actors with a readymade context to cause disruption and seek profit or take advantage of vulnerable individuals and populace. As the world wrestles with a pandemic caused by a new coronavirus, COVID-19, the authorities around the world are forced to face an avalanche of misinformation / false news about the virus on digital platforms. When it comes to reliability and acceptance.

Rumours are a lethal weapon that affects the morale of the people. The Law enforcement agencies have power under law to take legal action against anyone who spreads rumors about the virus and causes a state of panic among the general population. Even though, at present, India does not have a specific law to deal with menace of fake news but we still have existing legal provisions under Indian Penal Code, 1860 etc which can be invoked in case of misinformation. Some existing legal provisions are:

Section 505(1) of Indian Penal Code, 1860: The punishment for making, publishing or circulating any statement, rumour or report which may cause fear or alarm to the public, or to any section of the public.

Punishment: Imprisonment which may extend to 3 years or fine or both.

Section 66D of the Information Technology Act: Whoever, by means of any communication device or computer resource, cheats by personating.

Section 54 of the Disaster Management Act, 2005: Whoever makes or circulates a false alarm or warning as to disaster or its severity or magnitude, leading to panic.

Punishment: Imprisonment which may extend to one year or with fine.

Before creating, posting, sharing and forwarding any message, one needs to be aware about the implications of the same if not true and create panic in any way. One needs to refrain from forwarding any corona related messages without verifying specially in this age of “infodemic” which the World Health Organization defines as – “an overabundance of information—some accurate and some not—that makes it hard for people to find trustworthy sources and reliable guidance when they need it.

A senior official in India, commenting on the wrong activities of Abhigya Anand said: “The Law enforcement agencies are monitoring such posts on social media platforms and can land Abhigya Anand and those behind him in a legal battle or jail”. While the majority of the print and electronic media had jumped on the so-called prediction of Abhigya Anand thus projecting him as a “great astrologer”, just within the span of few months, such madness seems to be fading-away and this boy had already been proved to have been a big fun. But the most important fact here is – his parents – most possibly – were running this scam scheme with certain ulterior motives. Maybe they were intending of making millions of dollars, similarly to other fake godmen and godwomen in India.

Indian authorities should immediately investigate this case and stop this racket from spreading such nonsense!