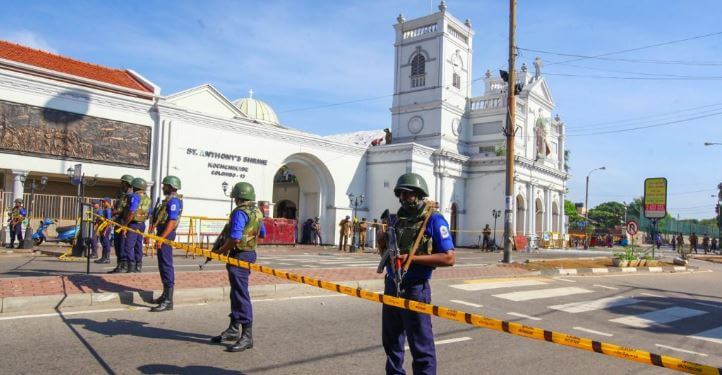 A complete mess up in handling the Defense affairs of te Country begins to emerge. So far there is no one to properly handle the affairs of the subject of ‘Defense’ except for an acting appointment. Also now, Sri Lanka’s top police official, Inspector General of Police Pujith Jayasundara, has resigned over failures that led to the deadly Easter bomb attacks, the country’s President said  last Friday.

Earlier President Maithripala Srisena who is constitutionally the Minister of Defense, as well as Minister responsible for “Law and Order” failed to take responsibility for Easter Sunday bombing and killings, instead blamed the Defence Secretary as well as the Inspector General of Police.

President said that if he was alerted in advance, he would have taken steps to prevent the attacks from taking place. What happened to his intelligence officials? Questions of this nature is now being posed.

Subsequently, President demanded the resignations of the Defense Secretary as well as the Inspector General of Police.

On last Thursday Defence Secretary Hemasri Fernando tendered his resignation, however the Inspector General of Police held on but he also resigned on Friday.

“The IGP has resigned. He has sent his resignation to the acting deference secretary. I’ll nominate a new IGP soon,” President Sirisena said.

Meeting with the heads of media institutions today, President Maithripala Sirisena said that IGP Pujith Jayasundara has resigned from his post.

“The IGP has resigned. He has sent his resignation to the acting defense secretary. I’ll nominate a new IGP soon,” the President was quoted as saying.

The President Wednesday requested the Defense Secretary Hemasiri Fernando and the Inspector General of Police (IGP) to submit their resignations following the public outrage against the top security officials over their failure to inform the public and prevent the Easter Day bombing despite receiving prior warnings of a possible attack.

Now, Sirisena’s nominee has to be confirmed by a constitutional council. Since of late, we observed that the Constitutional Council is not a rubber stamp to endorse President’s appointments.

Accordingly, it is learnt that Thusitha Wanigasingha, the Additional Secretary at the Law and Order Ministry has been appointed as the Acting Secretary of the Ministry of Defense.

However, it is learnt that the high-profile former Army Commander Geneal Daya Ratnayake too was earmarked for this appointment.

When  I contacted General Day Ratnayake, he said that so far there was no official contact regarding this appointment.

In the meantime, Sri Lanka President Maithripala Srisena said there are about 130 extremists who will be arrested and terrorism will be completely eradicated.

However, the President emphasized that all Muslim people should not be viewed as terrorists and they should be protected.

Also on Friday, an official Sri Lanka police Twitter account was deleted after it misidentified a US human rights activist as a suspected Sri Lankan serial bomber.

Late Thursday, police posted the names and photos of three women and two men on Twitter that they said were at-large suspects in the Easter Sunday assault.

One of the named was a US activist, who quickly tweeted that she had been falsely identified.

Sri Lankan police replied with an apology for the “inconvenience.”

* Sri Lankan President Maithripala Sirisena has on Saturday taken steps to ban the National Thawheed Jammath (NTJ) and Jamathei Millathu Ibraheem (JMI) in Sri Lanka as per powers vested in him under Emergency Regulations No. 01 of 2019.

* Covering the face in order to avoid the identification of a person will be banned with effect from today (29), to ensure the public safety, the President’s Office said. The decision has been taken by President Maithripala Sirisena under the Emergency Regulations.

K.T. Rajasingham a veteran journalist and writer. Presently he is the Chief Editor of Asian Tribune, published from Sweden.