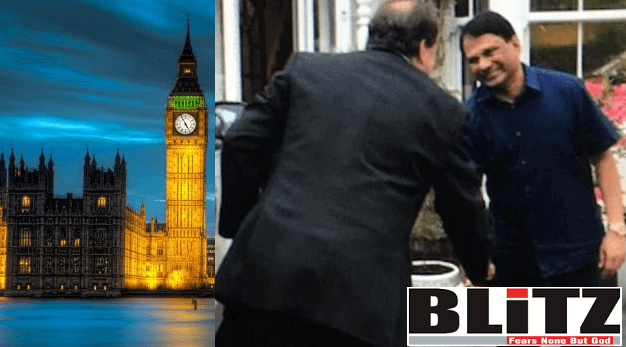 British journal the New Statesman America in an article titled ‘The Rise And Fall of British Democracy’ said “If walls could talk, the structures that house our democracy would teach a desperate lesson. Beneath the gold and gilt and glamour, parliament is a ruin. Its walls are riddled with asbestos; its cracked pipes tip dirty water into the chamber, and; fires break out with alarming regularity. A cross-party inquiry in 2016 found steam lines, gas pipes and water pipes piled haphazardly on top of one another, in a “potentially catastrophic mix”. Without urgent renovation, the whole edifice faced “sudden, catastrophic failure”.

It further said “Since the EU referendum of 2016, parliament has been cowering under the instruction of a higher democratic authority. MPs sit sullenly behind leaders imposed on them against their will, disciplined by manifestos on which they were not consulted and by activists who plot their de-selection. Journalists, protestors and even the prime minister stoke popular hostility to parliament, casting it as a Westminster cabal bent on obstructing the will of the people.”

The commentary went on saying “Democracy is a cruel mistress and parliament has no monopoly on its affections. Yet our parliamentary constitution is a cause worth fighting for. Saving it will require a frank recognition of its failures, and a willingness to do more than dial the clock back to 2015. During an earlier political crisis, in the 1830s, the Whig constitutionalist Thomas Macaulay adjured his fellow members to “reform, that you may preserve”. In that spirit, let us rebuild our parliamentary democracy.”

Democracy is the civic religion of modern British politics, but its roots do not run deep. Until the 20th century, the experimental record of democracy was notoriously poor. The democracies of the ancient world collapsed into anarchy and dictatorship; in the 1790s, a revolutionary democracy in France expired in a pool of civic blood; and the United States was engulfed in the civil war in the 1860s. Democracies, it appeared, were violent, despotic and unstable. “If there were a people of gods,” wrote Rousseau, “they would govern themselves democratically. So perfect a government is not for men.”

The model that emerged in Britain – more by chance than design – was a distinctly conservative idea of democracy. Power remained in the hands of Britain’s medieval parliament, operating at arm’s length from the public. Pre-democratic elements, such as the monarchy and the House of Lords, both survived and thrived, while governments successfully fought off demands for direct democracy or industrial democracy. This was not the self-governing democracy of the ancient world, in which citizens made their laws in the public square. It was government by a select few, accountable at periodic intervals to the electorate.

Britain in the post-Brexit referendum

Commenting on Brexit, John McLaughlin, Senior Contributor to the OZY wrote, this is one of those situations that is maddeningly complicated to explain while being simultaneously profound and far-reaching in its implications. In terms of the bare facts, I’d boil it down like this. The 2016 popular referendum produced a narrow victory for those wanting the United Kingdom to leave the European Union and left the country deeply divided. May had been searching for a compromise that could meet the minimal demands of those who supported “leave” (Brexit) and those who wanted to stay in the EU. Leavers argue that being in the EU leaves Britain with little control over immigration, its administrative, legal and judicial processes or its finances. The “remain” crowd argues that being in the EU enhances British influence, contributes to the country’s prosperity and gives Britain trading, travel and labor opportunities it could not have on its own.

He further said, May [Theresa May] lost multiple votes on variations of her plan, which would have essentially preserved many of Britain’s trading relationships with Europe while shedding most of its political and administrative ties to the EU. May initially said that no deal, a “hard Brexit,” would be better than a bad deal. But as her plan went down to successive defeats, she began highlighting the dangers of no deal — most economists predict economic and administrative chaos — and saying it loomed as the likely remaining option if Parliament continued rejecting her plan. And in the last few days, May even dangled the possibility of a second referendum, something she heretofore opposed and for which no support has yet coalesced.

What is next following Theresa May’s resignation announcement?

Johnson said just last week that he would take Britain out of the EU, “deal or no deal,” by October 31, 2019 [the EU’s latest deadline extension]. The other seven who’ve thrown in all say they would at least try renegotiating an agreement with the EU — Foreign Secretary Jeremy Hunt; former Work and Pensions Secretary Esther McVey; International Development Secretary Rory Stewart; Health Secretary Matt Hancock; former Brexit Secretary Dominic Raab; Environment Secretary Michael Gove; and the just-resigned leader of Commons, Andrea Leadsom. Some, such as McVey, Leadsom and Raab, talk more boldly about a “no-deal” exit if negotiations flounder — though keep in mind that talk is cheap when the main goal is to win No. 10.

Can Johnson or the new Tory leader succeed in Brexit?

Understanding the realities, my opinion is, Brexit is a lot like the health care of Obamacare issue in the United States, which is easy to project an alluring vision until someone, as the one who has to fix it, come up against the realities, complexities, and special interests. In this case, Boris Johnson, or whoever is chosen, will get a Brexit education that will include a larger dose of reality than challengers ever have to swallow.

There are clearly two major factors which are actively working in putting Britain into jeopardy following the Brexit. One factor is the entire European Nation or those unionists, and the second factor is those migrants into Britain from the EU countries. Until now hundreds and thousands of people from the EU countries have already flocked into Britain in search of a better life and they already have eaten thousands of jobs from the Britons. If this trend continues, gradually Britain’s economy may go into the grips of those migrants and immigrants, pushing the Britons into the corner. Moreover, some of the mighty EU nations are actively conspiring in even putting the United Kingdom’s century-old democracy into extreme challenges. They want to see the fall of Westminster, which also is a prime agenda of the Islamists and radical Muslims.

Recently we are seeing media reports stating a terror-funder family from Bangladesh has entered the United Kingdom with lots of illegal money. This family also has business relations with top-terrorist Dawood Ibrahim’s D-Company as well as are funding militancy. It is well known to the experts dealing in militancy issues that in the recent years most of the militancy groups such as Al Qaeda, Islamic State, Al Shabab, Boko Haram, Hezbollah, Arakan Rohingya Salvation Army and even Hamas are directly engaging into trafficking in narcotics from Afghanistan and Myanmar to various destinations in Asia, America, Africa, Australia, and Europe. Drug cartels in Mexico or other South American nations are joining hands with the Islamist militancy groups and narco-barons in Mexico, in particular, have already turned into business partners of the jihadists.

The family in Britain is also accused of bribing the Tory Party, while there even are media reports claiming a sitting junior minister and popular MP Mr. Stephen Hammond doing business with this family and is seen having private meetings with Md. Shahid Uddin Khan at latter’s residence in Wimbledon.

News of the connections between Mr. Stephen Hammond MP and Md. Shahid Uddin Khan has surfaced in the international media, including The Sunday Times, The Politicalite, The Blitz, The Asian Tribune, The Eastern Herald, The News Ghana, The Daily Sun, The Asian Age and dozens of newspapers and portals around the world, which though is considered as a huge blow to Britain’s ruling Tory Party, in reality, this news has already put the century-old British democracy into controversy. Most possibly this was the agenda of Islamic State (ISIS) and Md. Shahid Uddin Khan, as they clearly denounce democracy and promotes Caliphate.

While Britain refuses ISIS bride, why it is hosting the Khan family?

British policymakers have already denied return of ISIS bride Shamima Begum because of her past activities in favor of the Islamist militancy outfit. But, the same policymakers are not only hosting a terror-funder family but a minister is already proved of having business relations with the family. It is not unlikely that Mr. Stephen Hammond MP would exert influence in saving the Khan family from any possible legal consequences or investigations following the matter being reported in major newspapers and portals around the world. In other words, he has become an abettor to the deep-rooted conspiracy against Britain’s democratic system.

Renuka Patnaik is a researcher with an organization that monitors activities of militancy groups in the world.