Sensible news outlets in Bangladesh have either ignored or confronted the recent lies of terror-broadcast network Al Jazeera, while some dubious news outlets have made frantic bids of giving credence to Qatari media’s nefarious vendetta against Bangladesh. We—in Blitz—have always confronted any wrong and false propaganda against Bangladesh – whenever any of the local or international media outlets made foul attempts of defaming our country. But, to my utter surprise, an underground news outlet named Ajker Alokito Sokal has shown unforgivable audacity by not only supporting Al Jazeera’s anti-Bangladesh propaganda – this vernacular publication has carried a post-editorial filled with derogatory and seditious comments against Bangladesh, Prime Minister Sheikh Hasina, electoral system, intelligence and law enforcement agencies and the army chief.

The report said, Md. Mokhlesur Rahman Masum – editor and publisher of the above-named underground newspaper – had published an editorial commentary on February 4, 2021 titled “আলজাজিরার থ্রিলার মুভি খ্যাত ‘All the Prime Minister’s Men এবং আমাদের প্রতিক্রিয়া” where Ajker Alokito Sokal not only has supported the contents of the Al Jazeera report, but also has added further comments against the Prime Minister, Chief of Army Staff, country’s intelligence agencies and electoral system in Bangladesh. In the commentary, the editor of Ajker Alokito Sokal has branded Bangladesh as a country without sovereignty; it also has shown the extreme audacity of terming Sheikh Hasina as “incompetent”. It has even gone further by stating, Prime Minister Sheikh Hasina’s life is at the sunset.

Following publication of a report in Blitz, condemning the seditious commentary of Ajker Alokito Sokal, the underground publication had replaced the seditious commentary with a fresh statement saying: The online version of the publication has been regularly publishing the development works of the government in public interest and would continue in the future. It said, publishing the commentary titled “আলজাজিরার থ্রিলার মুভি খ্যাত ‘All the Prime Minister’s Men এবং আমাদের প্রতিক্রিয়া” was a blunder, for which they have sought apology.

While the commentary was published on February 4, 2021 most definitely with the ulterior agenda of defaming Bangladesh and the government, this publication needed full 18 days to retract their seditious content – and it only happened when the matter was reported in Blitz.

Editor and Publisher of the underground publication, Md. Mokhlesur Rahman Masum should now clarify – what was the motive behind publishing the above-mentioned commentary, which he and his newspaper now acknowledges as ‘blunder’? Why was the content not removed immediately after the publication, or why did they not remove it on their own before it had caught attention of Blitz team? After this serious instance, should Md. Mokhlesur Rahman Masum be allowed to continue with Ajker Alokito Sokal as its editor and publisher – or should he be at all allowed to continue as a journalist? The following answer will clearly prove – Mokhlesur Rahman Masum is not a journalist. Instead, he is using the identity of a journalist – an editor and publisher for covering criminal activities, including dealing in drug.

The treasonable article in Ajker Alokito Sokal had been circulating for 18 days before its removal and, certainly, many had already read it. By removing this article of lies, does he deserve any amnesty, since his schema of spreading vile lies against the State has already been fulfilled? Let it be asked rhetorically using an analogy: does a murderer deserve absolution after they plead guilty after already having murdered an innocent, with a sound- yet evil- purpose in mind? As responsible citizens, everyone – and more than anyone else, those who are involved with the media – should refrain from spreading any propaganda that only harms their country. If we allow those with zero sense of responsibility to run newspapers or use the freedom of expression in vilifying the State and those representing the people, we should already sense the premonition of an impending ‘media Chernobyl’ looming upon Bangladesh. The published article had challenged Bangladesh’s sovereignty, an unpardonable crime attacking each of the 170 million people of the country. However, all the more concerning is that it only confirms the suspicion that those who have always been against the independence of Bangladesh are certainly behind this. Furthermore, the waxing network of such networks, trying to sabotage the State, are using such underground publications in spreading their well-planned propaganda contents against the State and the government.

According to a report published in vernacular daily Kaler Kantho, Mokhlesur Rahman Masum was arrested in August 2017 in Cox’s Bazar district’s Ukhiya area with 20 thousand pieces of contraband drug named ‘Yaba’. The same news had also appeared in a number of national dailies and news agencies, including bdnews24. 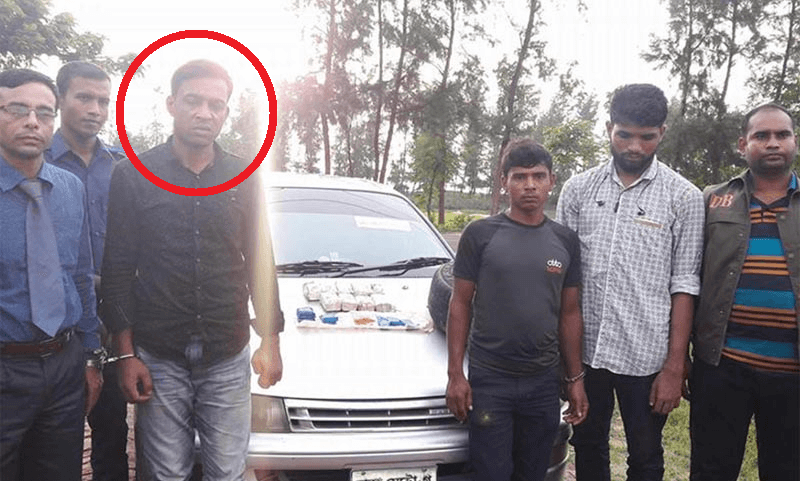 The news reports said, Mokhlesur Rahman Masum is the son of Late Abul Husain, and hails from Ambagan in Kuripara area in Dhaka.

Investigative journalists of Blitz are already checking the latest status of the above-mentioned case, as well if the case has already been on trial or if the investigation officer has cleared Mokhlesur Rahman Masum from the charges.

Mokhlesur Rahman Masum has sought apology for the “blunder” he has committed by publishing the anti-Bangladesh content in Ajker Alokito Sokal. But, in this particular case – his seeking apology or acknowledging blunder would not let him walk free from charges such as high treason and sedition. He may also be charged under the existing Digital Security Act in the country. We need to remember, Masum has clearly denied the sovereignty of Bangladesh through the commentary in Ajker Alokito Sokal as the commentary said sovereignty in Bangladesh is “non-existent”. Moreover, this dangerous anti-state content was not removed immediately or even within days. Instead, it was replaced with the apology stuff only when the matter was reported in Blitz.

Jamaat behind publication of seditious commentary in underground newspaper

On February 22, 2021, vernacular underground newspaper Ajker Alokito Sokal has published a ‘desk report’ titled: “জামাতপন্থী মোহাম্মদ আলী আকন্দের ষড়যন্ত্রের রোষানলে গণমাধ্যম!!” (Media fell victim of the conspiracy of pro-Jamaat [Jamaat-e-Islami Bangladesh] Mohammed Ali Akhand“, in which they have revealed the mystery behind publication of their now withdrawn commentary against Bangladesh’s sovereignty, a criticism of Prime Minister Sheikh Hasina, the electoral system, Army Chief and the government. It has also claimed, the commentary was published in the underground newspaper at the instruction of Imran Siddique Rubel: Executive Editor. But according to our findings, Executive Editor of Alokito Sokal is Sweety Rahman [a relative of Mokhlesur Rahman Masum], while Md. Mehedi Hassan is the News Editor and one Aktar Hossain Sohail is the ‘Advisor’.

Content of the ‘Desk Report’ titled ‘জামাতপন্থী মোহাম্মদ আলী আকন্দের ষড়যন্ত্রের রোষানলে গণমাধ্যম’ (Media fell victim of the conspiracy of pro-Jamaat Mohammed Ali Akhand) has now clearly proved the secret connection between the underground newspaper and Jamaat activists. Although the editor of this publication is now trying to scapegoat Imran Siddique Rubel – there had never been the Executive Editor of this publication; with the ulterior motive of hiding the plain fact that Ajker Alokito Sokal is a mouthpiece of Jamaat and anti-government elements.

We are calling upon the members of law enforcement and intelligence agencies in the country to investigate the case of Mokhlesur Rahman Masum and other members of Ajker Alokito Sokal and their cohorts and cronies and ensure exemplary punishment so that no one in the future would ever repeat a similar seditious act.