Al Qaeda man on the streets of Britain

Believe me or not – Al Qaeda’s founder Osama Bin Laden’s spin doctor, Adel Abdel Bary (60) is walking on the streets of Britain after being released from a prison in the United States because he is too fat to be locked up safely amid the coronavirus pandemic! This Al Qaeda man was jailed over the devastating 1998 attacks on US embassies in Kenya and Tanzania that killed 224 people. But this dangerous jihadist won early mercy release from the US prison because his morbid obesity and asthma puts him at risk of the pandemic. Immediately after being released from the prison, Adel Abdel Bary flew back to London, without any hassle!

Adel Abdel Bary is an Egyptian national while his son is an Islamic State (ISIS) rapper will be living with his wife Ragaa (59) at their £1 million council flat in Maida Vale.

In April 2020, Bary’s son, Abdel-Majed Abdel Bary was identified by his ears after sneaking into Spain.

Spanish police satisfied themselves they had the right man ahead of a dawn raid after comparing surveillance photos of the jihadi terrorist taken outside his rented apartment hideaway with file pictures of the tell-tale shape of his ears. Officers watching the city centre apartment in Almeria where Bary holed up with two other men, confirmed it was him after his arrest through fingerprints. 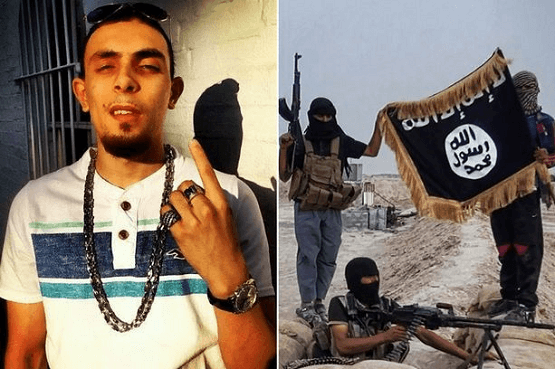 Bary (29), had put on more than six stone since his days in Syria and took advantage of Spain’s coronavirus lockdown to hide behind a face mask on the rare occasions he left the property.

But a police source quoted by respected Spanish daily El Pais said: ‘The shape of his ears was one of the things that enabled us to identify him.’

Bary, who shared sickening social media images of himself holding a decapitated head in Syria in 2014 after becoming a Muslim extremist and leaving his London home, will appear before a Madrid judge on Wednesday in a closed hearing.

Although there has been no official confirmation, Bary is thought to have reached Spain by boat from Algeria and come ashore unnoticed just five days before his arrest.

The boat has been described as a patera, a word normally used to describe the rickety wooden boats sub-Saharan Africans use to reach Spain from as far afield as Senegal but can include other types of vessels used by undocumented migrants.

Another unconfirmed report in the national Spanish newspaper La Razon claimed he was intending to return to the UK as soon as possible.

Police in Almeria revealed they had arrested three North Africans including an Algerian accused of trying to smuggle more than 30 migrants in a semi-rigid inflatable boat fitted with a 350 cv engine which was intercepted in the Med off Almeria.

One of the other two men arrested with him, said to be a 22-year-old using a false European passport who allegedly gave Bary logistical support, has been identified only by his surname Ceddiki.

The third man has yet to be identified, although he is believed to be a possible so-called Foreign Terrorist Fighter who was recently in Turkey.

Abdel-Majed Abdel Bary emerged as a key suspect in the hunt for the man dubbed Jihadi John filmed putting a knife to American journalist James Foley’s throat before boasting of having carried out his beheading.

The executioner was subsequently named as Londoner Mohammed Emwazi in February 2015.

Bary was born in Egypt but moved to the UK at the age of six along with his parents.

Before leaving for Syria in 2013 he made a name for himself as a rapper and some of his music was played on Radio 1.

He has been identified as a possible member of a group of four British-born Islamic terrorists known as ‘The Beatles’ because of their British accents, who guarded, tortured and beheaded foreign hostages in Syria. 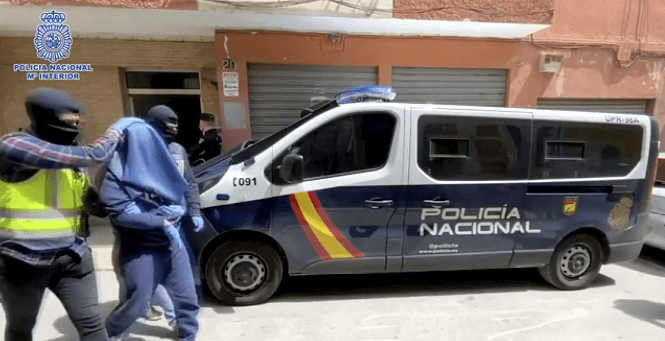 A spokesman for Spain’s Policia Nacional force, referring to ISIS by its acronym DAESH, said after the three arrests: ‘National Police officers have developed a counter-terrorism operation which has culminated in the arrest in Almeria of one of the most wanted DAESH Foreign Terrorist Fighters in Europe.

The force added in a statement: ‘The Foreign Terrorist Fighter arrested is one of Europe’s most wanted terrorists, because of his criminal trajectory in DAESH as well as his extreme dangerousness.

‘He had spent many years in the Syrian-Iraqi conflict zone and had very peculiar personality traits as well as an extremely violent criminal profile.

‘Part of his trajectory in DAESH can be evidenced in different press and TV articles, where aspects of his activity in the terrorist organization has been published, showing sometimes extremely crude images of his crimes in war zones.

By 2015, Abdel Bary had apparently become disillusioned with ISIS and was being hunted in Turkey after fleeing Syria.

The same year his father was jailed in the United States for his role in the 1998 al-Qaeda-linked embassy bombings in Nairobi and Tanzania.

In October 2015, Abdel Bary junior tried to have a Spanish woman flown to Turkey to join him as his bride, but the plan was thwarted by Spanish authorities.

Maria de los Angeles Cala Marquez, from Huelva, was jailed for two years in June 2018 after admitting trying to travel to Turkey to meet up with Bary and help him return to Europe.

The former hotel chambermaid was arrested when she tried to board a flight to Istanbul and travel to a secret location where Bary was on the run from western intelligence services.

According to the prosecution indictment, Cala Marquez admitted she had intended to travel to Syria to marry Abdel Bary.

The young woman had arranged her trip to Syria via Turkey and had contacted several intermediaries online to help to provide her a safe path to ISIS territory.

Al Qaeda kingpin Bin Laden’s spin doctor Adel Abdel Bary (60)’s lawyer told The New York Times: ‘After all this time, all Bary wants is to enjoy a quiet life with his family.’

Bary of Al Qaeda was arrested in the UK in 1999 and extradited to the US in 2012 where he struck a plea deal which ended with him being sentenced to 25 years behind bars. He was charged with 285 offenses, but pleaded guilty to just a handful, including threatening to kill by means of explosives and conspiracy to murder US citizens abroad.

The terrorist, who leased London offices in Kilburn Lane for bin Laden’s propaganda activities, had 16 years taken off due to the time he had spent on remand.

This notorious terrorist was born in Egypt but was granted asylum in Britain in 1991. David Cameron’s government is reported to have struck a deal with Washington to accept Bary back into Britain upon his release to avoid a human rights breach.

A security source told The Sun: ‘His return remains a huge headache for the Home Secretary.

‘She is intent on ridding the country of threats, but here’s a notorious terrorist dumped right on her doorstep.’

He is the father of ISIS jihadi Abdel-Majed Abdel, who was arrested in Spain after traveling to Syria where he posed with the severed head of an Assad regime soldier.

His lawyers had argued earlier this year that his morbid obesity was an ‘extraordinary and compelling’ reason to let him go. The judge agreed that he should be released on compassionate grounds because the coronavirus was a great risk to his health, given his obesity and asthma.

Bary had been serving his sentence in the ADX Florence supermax prison in Colorado before being shipped over to the east coast and then onto London.

He will not be placed under Terrorism Prevention and Investigation Measures because he has already served his sentence.

Now the British taxpayers have to bear the cost of the welfare from the state as well as for security monitoring for his safety of this cruel Islamist jihadist.

For the past few years, thousands of Muslim migrants from the EU nations have arrived in Britain and subsequently, they even had brought other family members from African and Asian nations in particular. Many of those relatives had even crossed the English Channel and ended up seeking asylum in Britain. Now, this huge size of Muslims will engage into spreading religious hatred and jihadism in Britain. If any of my readers would label me as Islamophobe, I would definitely tell them, on his arrival in Britain, Al Qaeda terrorist Adel Abdel Bary had sought asylum and immediately after his petition granted, he became the London cell leader of Egyptian Islamic Jihad, a radical Islamic terror group which later merged with Al Qaeda.