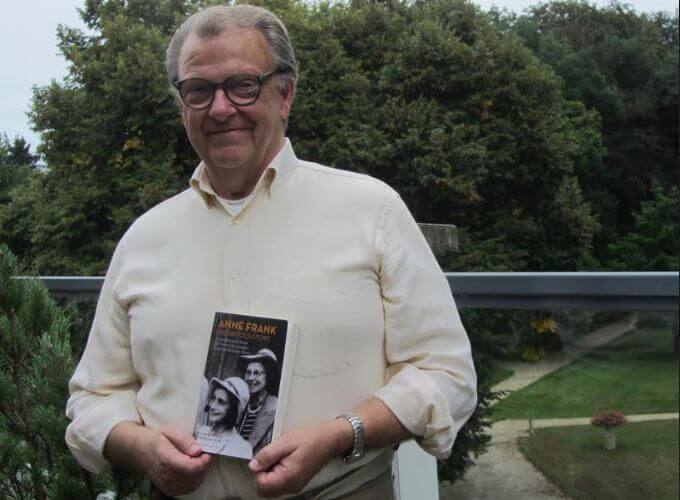 This biography is my small contribution to peace, understanding, and respect for every human being and above all LOYALTY towards one another.

My mother is Bep Voskuijl, Elli Vossen in the diary of Anne Frank. She is unknown but she was a helper of Jewish people in World War II.

My grandfather, Johan Voskuijl is even more unknown and he is the creator of the legendary revolving bookcase. Together they worked day in, day out to guarantee the safety of the hiders in the Secret Annex in Amsterdam.

‘Bep Voskuijl, breaking the silence. A biography of the youngest helper of the Secret Annex’ is the translated title of the Dutch book ‘Bep Voskuijl, het zwijgen voorbij. Een biografie van de jongste helper van het Achterhuis’. It was first published in the Netherlands and Belgium in April 2015.

Persistent signals from the American and British market have made me, Joop van Wijk, as a publisher, fellow author, and son of the leading lady (who was silent for decades during her life) – decided to translate the book in September 2018.

The result with the new title: ‘Anne Frank, the untold story. The hidden truth about Elli Vossen, the youngest helper of the Secret Annex’.

Many facets about the hiders in the Secret Annex in Amsterdam have been highlighted throughout the years, but, remarkably enough, the role of Otto Frank’s young secretary Bep Voskuijl has received very little attention.

Belgian journalist Jeroen De Bruyn and I, Joop van Wijk, dove into her past and reconstructed her tragic, but fascinating life.

Bep is 23 years old when, in 1942, she is let in on the secret of the eight hiders on Prinsengracht Amsterdam. During the next 25 months, she becomes a pillar of support for Anne Frank, with whom she builds an intense friendship. Bep buys clothes and food for the hiders and supplies Anne with paper to write her diary. Things aren’t easy for Bep: her father, the maker of the famous revolving bookcase, becomes gravely ill in 1943, and her sister collaborates with the Germans. Bep leads a double life, keeping this secret from her boyfriend and family.

When the Germans raided the hiding place on August 4, 1944, and arrested the hiders, Bep escaped in horror. Later, she rescued a large part of Anne’s writings.

The news of the deaths of seven out of the eight hiders – only Otto Frank returns from the concentration camps – leaves deep scars. ‘Anne Frank, The Untold Story’ casts a new light on Anne Frank’s short life, by means of previously unknown witnesses and documents. That makes this book a valuable addition to her world-famous Diary. Moreover, it’s a tribute to those brave Dutch people who risked their lives to save Jews. Finally, the book adds a remarkable name to the list of people who could have betrayed the hiders of the Secret Annex.

Part of a review by Amazon:

The Jewish hiders, they were protected and befriended by people such as Bep Voskuijl. This was not a trivial act of kindness. This was a testimony of their human spirit that lasted for 2 years. This secret society resisted the tyranny that eventually consumed them. Yet, through documents, photos and diaries, we can witness their struggles. This book should help us all appreciate our freedoms.

Our freedom from tyranny and yet our freedom to sacrifice for others. This book tells that story of sacrifice. LET US NEVER FORGET!!!

For more information about this book please use this link: ANNE FRANK THE UNTOLD STORY: The hidden truth about Elli Vossen, the youngest helper of the Secret Annex.

A “never-before-told story” and a “carefully hidden truth,” as well as “boundless loyalty in life” are three important issues.

These issues and my mother’s underlying motivations form the mission of this book for young and old.