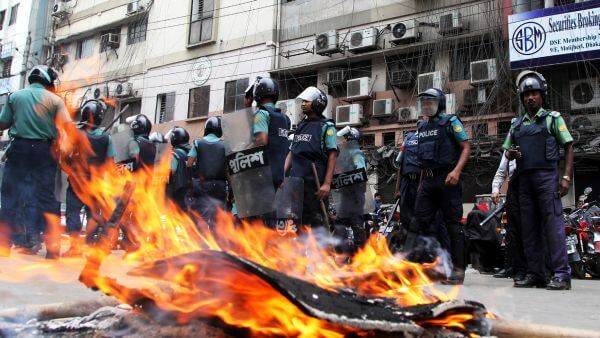 When world’s top investment advisers are warning about a possible 50-70 percent stock market collapse, immediately after the December 30 general election in Bangladesh, prices of shares are once again moving towards upper trend thus attracting potential investors in once again putting their hard-earned money in this gambling. It seems, no one did at all take any lesson from the past – the dangerous stock market crashes of 1996 and 2009. It is becoming evidently clear, following the December 30 general election, the same racket of stock market robbers, most possibly being led by the same scandalous person is all set in going for a third round of robbery.

According to Dhaka’s largest vernacular daily Prothom Alo, less than a week after the country had held general elections with the Awami League retaining power, the stock market has seen a sharp rise in index that exceeded earlier post-polls records.

Market experts called the skyrocketing of the share index as outcome of psychological expectations after the vote but also expressed concern over the trend that may jeopardize small investors’ interest.

The jump in the stock market index led to marker crash twice in recent history — in 1996 and 2010 and on both the occasions, the Awami League was in office.

Prices of shares of several companies owned by newly elected Member of Parliament Salman F Rahman increased in the past few days. The price of shares of ‘Z’ category company Beximco Synthetics with weak fundamentals rose 25 per cent in the past six trading days while the price of Shinepukur Ceramics Limited [a company owned by Beximco Group] increased 14 per cent. Share prices of Alif Manufacturing Company increased 42 per cent during the period. The company was called CMC Kamal Limited in 2014. AHM Mustafa Kamal, another MP who has been appointed finance minister, was then the owner of majority stakes of CMC Kamal.

Another stock market crash is imminent:

It is anticipated, for next several weeks, the skyrocketing trend in the stock market will continue until it reaches an optimum level, wherefrom the prices will suddenly collapse. This time, share-market fraudsters are looking for looting at least 2-3 billion dollars from the investors by playing the same old trick.

According to the analysts, a third-time crash in the stock market during the historic consecutive third-term of the ruling Awami League would ultimately put the government into serious jeopardy. Political opponents of Awami League will pick up this issue in showing to the country and the world about “ruling party’s evil tendencies” in “looting everything from the small investors” for the sake of making some of its top “donors” beneficial.

What happens to the billions of dollar bank robbery?

For past ten years, there have been free-style robberies in each of the public and private sector banks in Bangladesh. In most of the cases, members of the ruling party were directly involved and very sadly, all of the notorious bank robbers were granted impunity. It was also reported in the media about those bank robbers smuggling out hundreds of millions of dollars abroad.

What happens to the fraudulent MLM companies?

Since 2011, a number of fraudulent Multi Level Marketing (MLM) companies have looted almost US$ 12 billion from the small investors by fooling them with imaginary stories of exorbitant profit. Although few of the culprits were arrested in 2012, in some cases, some of those people managed getting released on bail by exerting influence or simply bribing the lower courts.

The government of Prime Minister Sheikh Hasina should not formulate a new law to ensure capital punishment to these MLM fraudsters and send all of the pending cases to speedy trial tribunal. At the same time, movable and immovable properties of these fraudsters should be confiscated by the state.