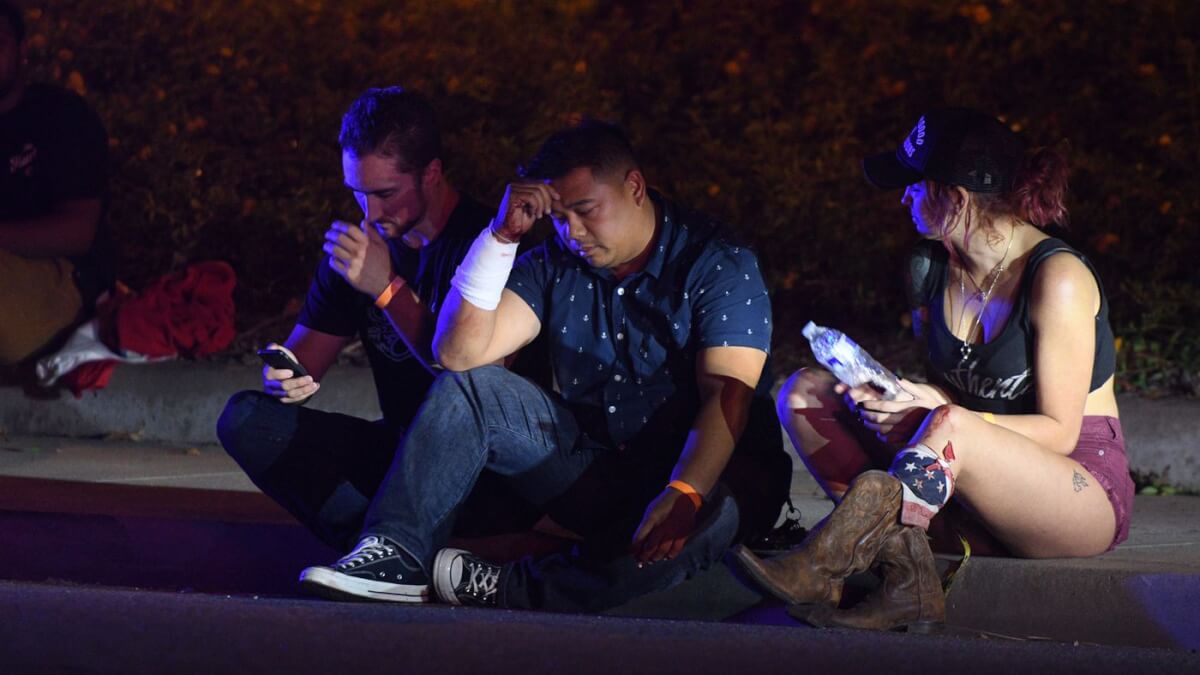 America clearly has become a victim of hate crime incited by the Democrats and their socialist-Islamist cohorts. According to media reports, twelve innocent people were killed in an overnight shooting at a popular bar in Los Angeles suburb. The victims include a sheriff’s sergeant.

Police said, the suspected shooter, who has not been identified, is dead. It is not yet known if he took his own life.

The gunman, dressed in black (a similar attire of the Islamic State (ISIS) jihadists), threw smoke bombs and opened fire inside the crowded Borderline Bar and Grill in Thousand Oaks, California, a favorite of the college student.

“We have no idea if there is a terrorism link or not,” Ventura County Sheriff Geoff Dean told reporters.

An undetermined number of people were also injured, Dean said.

He called the mass shooting a “horrific incident.”

“This community in my 41 years had never experienced anything like this,” he added.

From the Los Angeles Times:

Ventura County Sheriff’s Department Sgt. Ron Helus and a California Highway Patrol officer entered the bar first and were met with gunfire from the suspect, whose identity was not immediately known. Helus was shot several times and died at an area hospital early Thursday morning, according to Dean.

Helus, a 29-year veteran of the sheriff’s department, was planning to retire next year. Dean said he died “a hero.”

He is survived by a son and his wife, whom he called before entering the bar, Dean said.

Witnesses reported a horrifying scene as gunfire echoed through the club and those inside ran for cover, in some cases using chairs to break windows to escape the building. Others hid in bathrooms and an attic as they frantically called loved ones who were hearing reports of the shooting.

The first 911 calls reporting the shooting were received around 11:20 p.m., according to Dean. Helus and the CHP officer arrived on scene and engaged the suspect by 11:26 p.m., he said.

A motive in the shooting was not immediately clear, but Dean said there was no evidence linking the attack to terrorism. Police believe the weapon used was a handgun.

Eleven victims and the shooter were found dead inside the bar by responding emergency personnel.

Teylor Whittler went to Borderline to celebrate her 21st birthday on Wednesday night. She was dancing with friends in the bar when she heard what sounded like firecrackers. She quickly turned and followed the noise, only to find a man holding a gun near the entrance.

Erika Sigman, 19, said she began to race toward an exit as soon as screams erupted.

“I’m a Thousand Oaks resident,” she said. “This is a safe place. My parents let me go here. This is a trusted place. … To know that this happened in my safe place is a very, very scary thing.”

The FBI’s Joint Terrorism Task Force was sent to the scene, according to an agency spokeswoman. Representatives from the U.S. Bureau of Alcohol, Tobacco, Firearms & Explosives were also dispatched.

The number of people injured is likely to rise, said Ventura Sheriff’s Capt. Garo Kuredjian, as many victims transported themselves to area hospitals and emergency rooms with injuries. Dean said at least 10 other people who went to area hospitals had suffered injuries trying to escape the bar, but were not shot.

Wednesday nights are college-themed nights open to students as young as 18, according to the bar’s website. Witnesses said the event is popular with Moorpark college students, and the Pepperdine student newspaper tweeted that students from its campus were also inside at the time of the shooting.

Some witnesses said the bar is a hub for country music fans. Many of the attendees Wednesday night normally attended the Stage Coach country music festival in California and, tragically, some were survivors of the massacre at the Route 91 Harvest Festival in Las Vegas that left 58 dead last year.

Large crowds were forming in the area as friends and family members arrived at the scene to try and find out if their loved ones had survived the assault. Some who escaped the gunfire could be seen frantically talking on phones desperate to get information on friends or family members who may have been trapped inside, announcing the names of the people they were searching for during live television interviews.

Nellie Wong, who was also celebrating her 21st birthday on Wednesday night, said she scraped her knees diving to the floor when the shots rang out. Wong said she believed the gunman, who was dressed in a black hoodie, black shirt and black pants with a scarf obscuring his face, threw smoke bombs as he entered.

“Thank goodness he didn’t see me at all. I immediately stopped moving, stopped breathing,” said Wong, a student at California State University Channel Islands in Camarillo. “My heart was pumping really fast.”

Savannah Stafseth was standing outside crying with multiple cuts on her arms.

Aubrey Ryan, 27, of Newbury Park, was in the front of the restaurant with at least 15 friends when a man came in and started shooting at the ceiling.

The gunman shouted something but Ryan could not hear what he said. A friend threw her onto an outdoor balcony as the gunfire rang out so she could escape, said Ryan, who feared some of her friends were still inside the bar.

This is the second time this year Thousand Oaks has seen violence in a crowded area. In March, a man shot and killed his wife before attempting to shoot himself at the Thousand Oaks Mall.

Around 1:30 a.m., dozens of people lined the sidewalk in Moorpark as police lights flashed through the darkness. Some sat on a concrete hill and watched from their perch.

Employees and people who had friends inside the bar huddled together, some hugging and asking one another if they had any updates from loved ones.

Tyler Odekirk, 21, started working at the bar as a security guard two months ago. He said he knew “everybody” at the bar Wednesday night because he was there so often, but he was struggling to reach friends.

“I can’t get anything to anybody that’s in there,” he said. “I had a friend call me in a panic thinking that I was there.”

Carl Edgar, a 24-year-old Tarzana resident, said he had about 20 friends inside the bar, where he is a regular. The bar is an extremely popular hangout for Moorpark College students on Wednesday nights, according to Edgar, who was speaking with friends who were inside when the shooting began.

One texted him that she was hiding in a bathroom, fearing for her life. But Edgar said he was hopeful that his friends were safe.

Some of them, sadly, had been through this before.

“There are a few people we can’t get a hold of, but in these situations people usually turn off their phones to be safe so I’m not gonna get too worried. A lot of my friends survived Route 91,” he said. “If they survived that, they will survive this.”

What counterterrorism experts in Blitz say?

According to the counterterrorism experts in Blitz, the pattern of the attack and the attire of the attacker clearly prove it to be an act of some lone wolf attack. “Most possibly the attacker might have been inclined towards radical Islamist militancy, who had tremendous hatred towards people attending bars” they added.

Our experts suggest, the attacker might have taken his own life after the attack, which too is a very phenomenon in the cases of jihadist attacks.

Expressing grave concern, the experts said, “The California bar attack is a result of hatred incited by the Democrats and antisemitic forces. While notorious criminals are advancing towards the United States in caravan, this attack and the attack of the Tree of Hope synagogue in Pittsburg evidently prove, religious extremism, terrorism and hatred is on alarming rise. Unless such acts are handled with an iron hand, lives of the American people will be exposed to extremely vulnerability.”