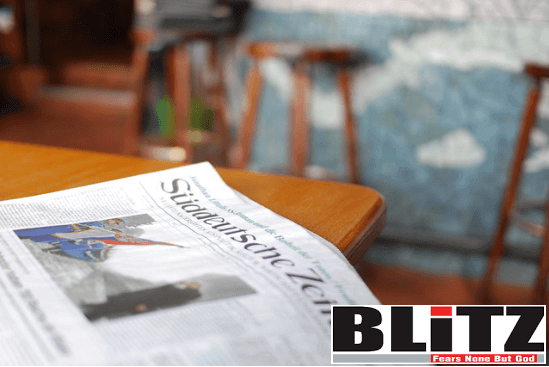 Media that frequently incite against Israel often slip into publishing antisemitic cartoons.  A case in point is a recent cartoon in The New York Times that dehumanized Israeli PM Benjamin Netanyahu by depicting him as a dog. Antisemitic cartoons have appeared in the British Independent and Guardian, the German Süddeutsche Zeitung, the Italian Il Manifesto, the Swedish Dagens Nyheter, the Dutch Volkskrant, and all three leading Norwegian dailies.

On April 25, 2019, the International Edition of The New York Times published a cartoon depicting Israeli PM Benjamin Netanyahu as a dog. Animalization is a classic motif of antisemitism. The paper’s administration blamed the publication of the cartoon on a single editor, but did not acknowledge that the cultural and political environment at The New York Times facilitated that editor’s transgression.

Major media in a variety of countries have often incited against Israel and published antisemitic cartoons. In 2003, for example, the British daily The Independent printed a caricature by Dave Brown depicting then-Israeli PM Ariel Sharon as a child-eater, a new mutation of the medieval blood libel. Even after receiving numerous complaints, the UK’s Press Complaints Commission (PCC) decided the cartoon had not breached its ethical code. In fact, it subsequently won the Political Cartoon Society’s “Political Cartoon of the Year Award.” The award was presented by former Labour Party cabinet minister Clare Short at the headquarters of the prestigious weekly, The Economist, in London.

In 2005, Jewish politician Michael Howard was leader of Britain’s Conservative Party, then in opposition. In April of that year, The Guardian published a cartoon by Steve Bell depicting Howard with vampire’s teeth, one of which was dripping blood, and holding a glass of blood. The caption read: “Are you drinking what we’re drinking? Vote Conservative.” Later, Bell again drew Howard with vampire’s teeth in The Guardian. The world’s leading expert on antisemitic cartoons, Belgian scholar Joël Kotek, has said that it is mainly Jews who are represented as vampires in cartoons.

The “progressive” liberal daily Süddeutsche Zeitung (SZ) is one of the most read “quality” papers in Germany. On May 15, 2018, SZ published a cartoon that depicted Israeli PM Netanyahu as that year’s Israeli Eurovision winner, Netta Barzilai, celebrating the victory while holding a missile with a Star of David on it. The cartoonist drew the Israeli leader with an oversized nose, ears, and lips, classic antisemitic stereotypes.

SZ apologized after many negative reactions, but the paper’s incitement has a long history. In 2013, it published a caricature of a horned creature about to eat breakfast. The caption said: “Germany is serving. For decades, Israel has been given weapons, and partly free of charge.”

In 2014, yet another antisemitic cartoon appeared in SZ. Burkhard Mohr drew Jewish Facebook entrepreneur Mark Zuckerberg as an octopus using its tentacles to control social media. Zuckerberg was drawn with a long nose and thick lips, once again typical antisemitic stereotypes. Kotek has pointed out that the Jew-as-octopus is another classic motif in antisemitic cartoons.

In 2008, the Italian left wing daily Il Manifesto portrayed Jewish journalist Fiamma Nirenstein, who was at the time a candidate for the center-right People of Freedom Party in the Italian parliamentary elections, with the caption “our electoral candidate: Fiamma Frankenstein.” Cartoonist Vauro drew her with a nose long enough to touch her mouth, and she wore a campaign button, a Star of David, and the fascist insignia. The Anti-Defamation League (ADL) called the cartoon “indisputably antisemitic.” The paper’s editors refused to apologize.

The Swedish liberal daily Dagens Nyheter published a cartoon in 2016 showing Netanyahu and US president-elect Donald Trump. The two were being carried by an Orthodox Jew, a member of the Ku Klux Klan, and a gun-carrying figure branded with the Israeli flag. The caption read, “Finally.” The paper initially defended the caricature. Later, its editor-in-chief – who is Jewish – tweeted that publishing the cartoon had been a mistake but at the same time denied that it was antisemitic.

In the Dutch left liberal daily Volkskrant, cartoonist Jos Colignon has published several antisemitic cartoons over the years.  In 2018, on the occasion of Israel’s 70th birthday, he drew a cartoon of a large Israeli soldier with a Star of David on his back shooting a small Palestinian against a wall, spraying bullets around him that spelled out “Happy Birthday to me.”

In 2013, Volkskrant published a Colignon cartoon that had two parts. The right side showed the North Korean dictator with the caption, “Atom bomb in the sleeves, atom bomb in the pockets.” On the left was a black-clothed and black-hatted ultra-Orthodox Jew with a large nose identified as “Israel.” He had bombs in his pockets and was accompanied by the caption: “Nothing in the sleeves, nothing in the pockets.”

In 2012, Colignon created for Volkskrant a drawing of Dutch right-wing politician Geert Wilders, the leader of the Freedom Party. A strange hand was putting money in his pocket. Wilders said in Hebrew, “Thank you and don’t worry.” The cartoon suggested that he is financed by international Jewry.

The country where antisemitic caricatures against Israel are most frequent is Norway. The three leading national dailies are all anti-Israel.  Only a small selection of the hate cartoons can be mentioned here. In the largest paper, Verdens Gang, cartoonist Morton M. Kristiansen portrayed the Jews of Israel as parasites who stole land from the Arabs and still want every last grain of sand.

In 2002, the second-largest national daily, Affenposten, published a cartoon by Inge Grodum. It showed a Star of David – instead of a regular star – over Bethlehem and three men riding camels. The latter refers to the three wise men who foresaw Jesus’ birth. The cartoon insinuates that Israel has converted Bethlehem into a Jewish city.  In fact, under the rule of the Palestinian Authority, the majority of the town has become Muslim instead of Christian. There are no Jews living in Bethlehem. In another cartoon in the same paper by the same artist in the same year, Israeli tanks fire at the Star of Bethlehem.

The third-largest paper, Dagbladet, has published several antisemitic cartoons by Finn Graff, two of which depict Sharon and Olmert as Nazis.

The former secretary-general of the Norwegian Labor Party, Haakon Lie, wrote in his autobiography: “The Labor Party conducted serious attacks against Israel. It used caricatures of Finn Graff that evoked the antisemitic illustrations of Der Stürmer in Hitler’s days and The Crocodile in Moscow.” Norway’s King Harald V nevertheless granted that draftsman of antisemitic cartoons the Order of St. Olav, the highest order of the country.