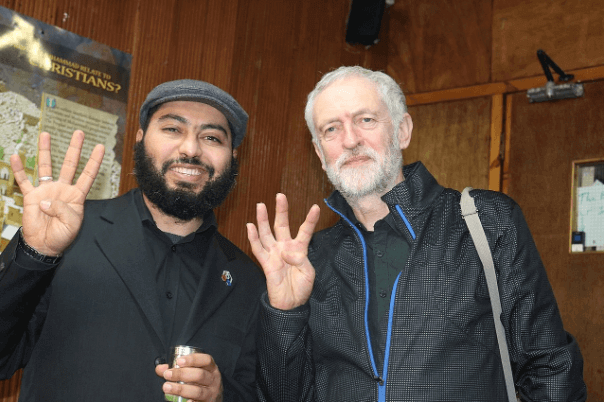 No organization in Europe can rival the British Labour party for the promotion of antisemitic hate, rendering it an ideal case study. As soon as the picture of Labour’s antisemitism appears reasonably complete, massive stores of new data emerge.  The forthcoming investigation of Labour by the Equality and Human Rights Commission (EHRC) is likely to provide one of history’s most profound analyses of antisemitism within a single organization.

Antisemitism is rising in many places in the Western world. If one wishes to study the many facets of contemporary hate promotion and identify ways to fight against it within a single organization, nothing in Europe can rival the British Labour party as a subject for analysis.

The main enabler of antisemitism in Labour is Jeremy Corbyn, the party’s leader since 2015. He has called representatives of Hezbollah and Hamas “brothers” and “friends.” Corbyn made donations to one Holocaust denier and welcomed another. He is a long-time anti-Israel inciter, and he and his close assistants are deliberately hindering the expulsion of antisemites from the party. The Sunday Times claimed that Corbyn’s office has been involved in delaying or blocking at least 101 such complaints.

There seems to be an inexhaustible supply of antisemitism in Labour. As soon as an apparently complete picture of the problem starts to take shape, massive new stores of data emerge.

In March 2019, British scholar Alan Johnson, a Labour member, published a 135-page report that concluded that the party is institutionally antisemitic. Johnson divided antisemitism in Labour into three categories: the socialism of fools, classic racial antisemitism, and antisemitism as anti-Zionism.

In May, Labour Against Antisemitism, a campaign of activists, submitted a file to the Equality and Human Rights Commission (EHRC), a public body established by the Equality Act of 2006. The file contained 15,000 screenshots showing examples of alleged antisemitism in Labour.

Later in May, it became known that approximately 100,000 emails and WhatsApp messages from within Labour – collected by former party officials – would be submitted to the EHRC. This body, which has already undertaken the first step of a statutory inquiry into Labour’s handling of antisemitic complaints, has decided to open a full inquiry into Labour. This kind of investigation of a party has only happened once before. In 2010, the small cryptofascist British National party (BNP) was found guilty of racism.

The EHRC report on Labour may take up to two years to complete. It is likely to provide one of the most profound analyses of antisemitism within a single organization in history.

The whitewashing of antisemitism can also be studied by looking at the Labour party. The focus here would be on Labour members who have made antisemitic slurs but not been expelled. There is also the problem of individuals who target people who expose the antisemitism within the party.

Jews themselves are particularly useful in the whitewashing of antisemitism. The Jewish Voice for Peace (JVP), for example, is a small organization that supports Corbyn. Its secretary, Glyn Secker, addressed a pro-Palestinian rally in London, where he said the Jewish Labour Movement and Jewish MP Dame Margaret Hodge are a fifth column inside Labour. “Jews are in the gutter with these rats,” he added.

Rhea Wolfson is one of two Jews in Labour’s governing body, the National Executive Committee. She wrote in June 2018: “I’ve had the honor of working closely with Jeremy Corbyn, one of the most principled people in politics… Anyone who knows, has met, or worked with Jeremy Corbyn, as I have, knows that he does not have a prejudicial bone in his body, and is utterly committed to tackling antisemitism, as he is against all forms of discrimination and oppression, which he has fought against all his life. My commitment to Labour is unwavering and I am proud of the work that Jeremy is doing to tackle antisemitism in politics and wider society.”

Wolfson’s praises notwithstanding, the general British public does not believe Corbyn will end Labour’s antisemitism crisis. Fifty percent of all voters agreed in May 2019 that Labour has a problem with anti-Jewish racism, up from 43% in a similar poll in February of this year. The number of people who deny that Labour has such a problem fell from 23% in February to 18% in May.

Yet another major area worthy of research is the overlap in Labour between anti-Israel inciters and whitewashers of antisemitism. One example: former Labour Minister Clare Short wrote on her blog in July 2016, “The charge of antisemitism used against members of the Labour party critical of Israel is a ploy to detract from Israel’s breaches of international law.”

The Labour party is also an ideal place to investigate what might be called the “smokescreening” of the antisemitism issue, a subject rarely researched. The party’s leaders do not say, “We protect antisemites, whom we consider valuable to the party.” On the contrary: Corbyn has on many occasions said the party will stamp out antisemitism.

When Jennie Formby became Labour’s General Secretary at the beginning of 2018, she promised that complaints would be dealt with within a few months. Many cases remain unprocessed, and new ones kept emerging. In February 2019 she said that antisemitism cannot be stamped out totally: “I don’t think anyone can ever say that we can eradicate antisemitism completely and stop every single person … every single day someone else could join the party tomorrow and do something.” Whether this is true or not, it is a marginal issue. The essence of the problem concerns antisemitic remarks by current members of the party, some of whom have belonged to it for years.

It is important to note that there have been significant reactions against antisemitism in Labour, and its flawed handling of the problem, from within the party. The strongest internal force fighting antisemitism is the Jewish Labour Movement (JLM), which has been part of Labour for almost one hundred years. However, even the JLM used a smokescreening euphemism about Corbyn. It issued a statement to the effect that it has lost all confidence in Corbyn’s ability to kick racists out of the party. Corbyn is not, however, unable to do so. He in fact prefers to keep certain antisemites in the party. The JLM stopped short of making this clear.

Another interesting action against antisemitism within Labour was the decision by former PM Gordon Brown, who is not Jewish, to join the JLM out of solidarity as an affiliate member. So too did Mayor of London Sadiq Khan. Many senior Labour personalities have come out against antisemitism in the party, including former PM Tony Blair and Shadow Chancellor Ed Balls.

The Labour antisemitism scandal has aspects that go beyond the party. Labour is an observer in Socialist International (SI), an organization of social democratic, socialist, and Labour parties that brings together 147 political parties and organizations from around the globe. It claims to favor progressive policies in a fairer world.

The SI has a detailed ethical charter that includes a “total commitment to the values of equality and solidarity.” It respects the rights of minorities and individuals. By not acting against Labour, the SI leadership and its members make themselves complicit with that party’s institutional antisemitism. They cannot claim ignorance, as SI’s office is in London.

Research into antisemitism is very much a work in progress. As the mainstream media continue to take an interest in antisemitism developments in the Labour party, many more insights should come to light.