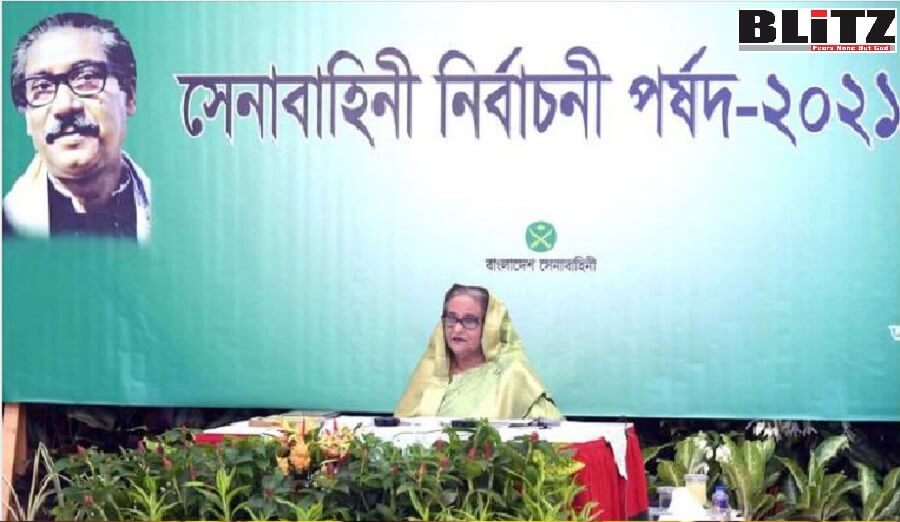 “That is why it’s (army) leadership must be entrusted to professional and responsible officers who are always imbued with the ideology of the great War of Liberation and ready to sacrifice their highest for the protection of sovereignty,” she said.

Mentioning that discipline is the backbone of the army, she laid emphasis on finding honest, disinterested, fair, people-friendly, humane and successful officers who demonstrated leadership in various fields of their career for the case of promotion.

Sheikh Hasina said she was happy to know that the promotion of army officers is being given following TRACE (Tabulated Record and Comparative Evaluation) method which reveals a comparative assessment of various aspects of their professionalism.

“At the same time, I believe the adjudicators by standing above their personal likes and dislikes would select the right person for promotion through wisdom and prudent analysis,” she said, adding, “You (adjudicators) just have to be neutral and influence-free to find out the capable leadership.”

The Prime Minister said appropriate officers should be promoted to various important posts such as command, staff, trainer, and it will increase the acceptance of all.

She said the Awami League government always runs the country as the servant of the people, never as a ruler.

Sheikh Hasina said Bangladesh Army had started its progress due to the sincere efforts of Father of the Nation Bangabandhu Sheikh Mujibur Rahman.

In the continuation of the progress journey, the army has now become a highly professional, efficient and modern force due to intensive care from her government, she said.

“Our army has been working very efficiently in various development and public welfare activities, including containing the recent coronavirus pandemic, which is really commendable. Not only at home, the army has brought a rare honor and dignity for the country from the world stage,” she said.

The Prime Minister said in the last 12 and a half years, her government has carried out massive development in the three forces.

She said in keeping pace with the developed world, the government has incorporated state-of-the-art weapons, military aircraft and helicopters as well as modern infantry gadgets and engineering equipment.

On the basis of the defense policy formulated by Bangabandhu, she said, they have formulated the new “National Defense Policy, 2018”, which has been approved by the cabinet.

Bangladesh has now become one of the highest contributors of peacekeepers in the world, she continued.

Sheikh Hasina briefly highlighted her government’s development initiatives for the armed forces during 1996-2000 and 2009 to present.

She went on saying the government also procured a sufficient number of Armored Personnel Carriers (APC), Armored Recovery Vehicles (ARV), battle tanks, helicopters and other necessary armaments and equipment in the army.

The government formulated the “Forces Goal-2030” and has been implementing it with the aim of building a state-of-the-art, trained and up-to-date military force, she added.

The Prime Minister said Bangladesh is ranked among the top five countries in the world in terms of economic progress and at present the country is the 41st largest economy in the world.

She underlined the successes of her government such as trimming down poverty rate below 20.5 percent, increasing per capita income to $ 2,227, implementation of mega projects which are progressing fast even during the coronavirus pandemic, modernization of all communication systems and sending Bangabandhu Satellite-1 into the space.

Sheikh Hasina said the government is celebrating “Mujib Barsho” in 2020-2021 and celebrated the golden jubilee of independence on March 18-26, 2021 where the world leaders highly praised Bangladesh’s progress.

“We are working on the principle of ‘zero tolerance’ to eradicate militancy, terrorism and drugs, and we have formulated the second perspective plan to achieve the ‘Sustainable Development Goals’ by 2030 and to build a hunger-poverty-free developed and prosperous Bangladesh by 2041. In addition, ‘Bangladesh Delta Plan-2100’ has also been adopted,” she said.

The Prime Minister said Bangladesh’s economy is moving up when the world is standing dormant in this Covid-19 gripped period.

She said her government is providing homes to landless and homeless people while electricity has been provided to 99 percent of the people.